A Glossary of European Noble, Princely, Royal and Imperial Titles 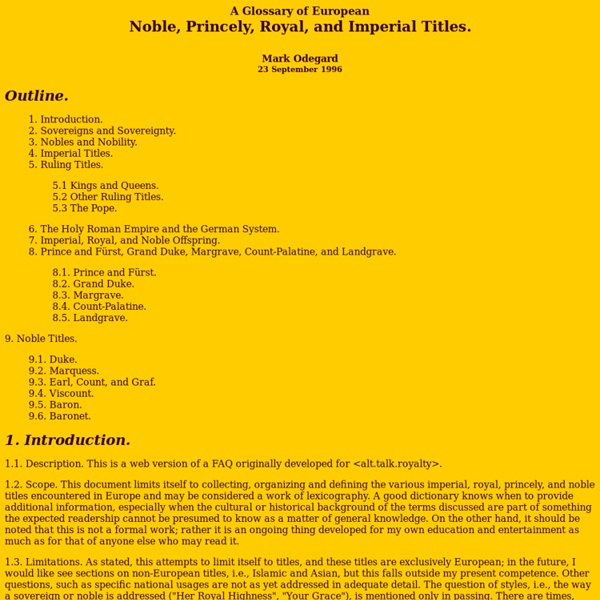 Outline. 1. Introduction. 2. Sovereigns and Sovereignty. 3. Nobles and Nobility. 4. Imperial Titles. 5. 5.1 Kings and Queens. 5.2 Other Ruling Titles. 5.3 The Pope. 6. 8.1. 9. 9.1. 1. 1.1. 1.2. 1.3. 1.4. 1.5 Version History. 1.6. 1.7. 1.8. 1.9. 2. "Sovereign" (in the European sense) is a technical term, both noun and adjective. Luxembourg is headed by a grand duke; Liechtenstein and Monaco are headed by princes. Before the unifications of Germany and Italy, there were a welter of sovereign or essentially sovereign states ruled by variously-titled sovereigns -- electors (in German, "Kurfürst"), margraves, etc. 3. Romans recognized three orders: patricians, equestrians and plebeians, and earlier, before the foundation of the republic, a fourth: royalty. These notions of the Romans apply to present-day parlance. In essence, the nobility were the landowners. A distinction needs to be made between "nobility" and "peerage". 4. Dr. 5. 5.2. 5.3.

Royal and noble ranks Traditional rank amongst European royalty, peers, and nobility is rooted in Late Antiquity and the Middle Ages. Although they vary over time and between geographic regions (for example, one region's prince might be equal to another's grand duke), the following is a reasonably comprehensive list that provides information on both general ranks and specific differences. Ranks and titles[edit] Sovereign[edit] Main articles: Monarch and Sovereign Common titles for European and Near Eastern monarchs Note that many titles listed may also be used by lesser nobles – non-sovereigns – depending on the historical period and state. Imperial titles High royal titles King of Kings mostly used in Christian contexts to denote Jesus Christ or the Christian Roman emperors of the Late Empire and Byzantine periods. Royal titles Princely, ducal, and other sovereign titles Religious titles Other sovereigns, royals, peerage, and major nobility[edit] Titles Minor nobility, gentry, and other aristocracy[edit] See also[edit]

What is the royal Hierarchy? King/Queen Regnant Queen/Prince Consort(spouses to the sovereign) Prince/Princess who are the heir apparent or heir presumptive to the throne Prince/Princess All of the above may bear a ROYAL version or versions of these peerage titles: Duke/Duchess,Marquess/Marchioness, Earl/Countess, Viscount/Viscountess,Baron/Baroness For example,Charles,Prince of Wales is also Duke of Cornwall, Duke of Rothesay, Earl of Carrick and Baron Renfrew, Lord of the Isles, and Prince and Great Steward of Scotland. Royal Dukes,et cetera,are all higher in precedence than the non-royal peerage. Non-royal peerage members are: Duke/Duchess Marquess/Marchioness Earl/Countess Viscount/Viscountess Baron/Baroness Non-peerage: Baronet/Baronetess Knight/Dame These are all of the UK titles.There is a site that lists and provides histories of all European Titles at

10 Classic Literature Terms That Are No Longer Used (For the Most Part) Reading a book from the 18th or 19th century is kind of like reading a handwritten, entirely cursive note from your grandmother in that, unless you have experience with such material, you will only understand 60% of the language used. Considering that it’s physically impossible for me to make it through any old book without an online dictionary open on my computer screen, I think it’s safe to say that there are some words used in classic literature that are not entirely common or have fallen out of use completely. For your convenience, I’ve compiled a list of some of the more obscure classic lit terms (or ones that are used less frequently today) because I feel selfish enjoying them all by myself: Mackintosh/Macintosh (n.): waterproof raincoat Can you believe Mac computers were invented in 1824? Pusillanimity (n.): cowardliness Belly Timber (n.): food I’m tempted to type this entire paragraph in caps because that’s how much I love this term. Wiseacres (n.): a know-it-all So next time Mr.