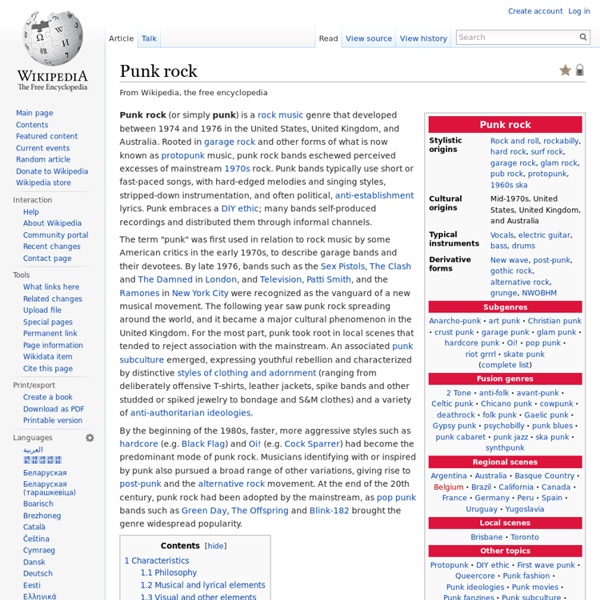 Punk rock (or simply punk) is a rock music genre that developed between 1974 and 1976 in the United States, United Kingdom, and Australia. Rooted in garage rock and other forms of what is now known as protopunk music, punk rock bands eschewed perceived excesses of mainstream 1970s rock. Punk bands typically use short or fast-paced songs, with hard-edged melodies and singing styles, stripped-down instrumentation, and often political, anti-establishment lyrics. Punk embraces a DIY ethic; many bands self-produced recordings and distributed them through informal channels. Characteristics Philosophy Technical accessibility and a DIY spirit are prized in punk rock. The issue of authenticity is important in the punk subculture—the pejorative term "poseur" is applied to those who associate with punk and adopt its stylistic attributes but are deemed not to share or understand the underlying values and philosophy. Musical and lyrical elements Johnny Rotten and Steve Jones of the Sex Pistols Protopunk Related:  Youth subculture in Jamaika, UK and continental Europe 60's-80's

Oi! Oi! is a subgenre of punk rock that originated in the United Kingdom in the late 1970s.[1] The music and its associated subculture had the goal of bringing together punks, skinheads and other working-class youth. [2][3] History[edit] The prevalent ideology of the original Oi! movement was a rough brand of working-class rebellion. The white power skinhead movement had developed its own music genre called Rock Against Communism (RAC), which had musical and aesthetic similarities to Oi! played an important symbolic role in the politicization of the skinhead subculture. Garry Bushell, a music journalist who promoted the Oi! The mainstream media increased its claims that Oi! In the aftermath of that riot, many Oi! See also[edit] References[edit] External links[edit] oioimusic.com Weekly updated site with interviews and reviewsEurope Punk - Music for social change, not profit.Oi!

Ska Etymology[edit] There are different theories about the origins of the word ska. Ernest Ranglin claimed that the term was coined by musicians to refer to the "skat! skat! skat!" History[edit] Byron Lee & the Dragonaires performed ska with Prince Buster, Eric "Monty" Morris, and Jimmy Cliff at the 1964 New York World's Fair. 2 Tone[edit] Third wave [edit] Third wave ska originated in the 1980s and became commercially successful in the 1990s. United States[edit] The mid-1990s saw a considerable rise in ska music's underground popularity, marked by the formation of many ska-based record labels, booking organizations and indie zines. By the late 1990s, mainstream interest in third wave ska bands waned as other music genres gained momentum.[35] Moon Ska Records folded in 2000, but Moon Ska Europe, a licensed affiliate based in Europe, continued operating in the 2000s and was later relaunched as Moon Ska World. United Kingdom[edit] Germany, Australia, Japan and South America[edit]

Sex Pistols The Sex Pistols were an English punk rock band that formed in London in 1975. They were responsible for initiating the punk movement in the United Kingdom and inspiring many later punk and alternative rock musicians. Although their original career lasted just two-and-a-half years and produced only four singles and one studio album, Never Mind the Bollocks, Here's the Sex Pistols, they are regarded as one of the most influential acts in the history of popular music.[1][2] In January 1978, at the end of a turbulent tour of the United States, Rotten left the Sex Pistols and announced its break-up. Over the next several months, the three other band members recorded songs for McLaren's film version of the Sex Pistols' story, The Great Rock 'n' Roll Swindle. Vicious died of a heroin overdose in February 1979. History[edit] Origins and early days[edit] The group had been rehearsing regularly, overseen by McLaren's friend Bernard Rhodes, and had performed publicly for the first time.

The Clash The Clash's politicised lyrics, musical experimentation, promotion of DIY ethics and rebellious attitude had a far-reaching influence on rock, alternative rock in particular.[2] They became widely referred to as "The Only Band That Matters", originally a promotional slogan introduced by the group's record label, CBS. In January 2003, the band—including original drummer Terry Chimes—were inducted into the Rock and Roll Hall of Fame. In 2004, Rolling Stone ranked the Clash number 28 on their list of the 100 greatest artists of all time.[3] History[edit] Origins: 1974–76[edit] The act was still searching for a lead singer. "so I went out in the crowd which was fairly sparse. On 30 May, Rhodes and Levene met surreptitiously with Strummer after a 101'ers gig. Early gigs and the growing scene: 1976[edit] With Rhodes insisting that the band not perform live again until they were much tighter, the Clash rehearsed intensely over the following month. Punk outbreak and UK fame: 1977–79[edit]

Skinhead Member of a subculture that originated among working class youths in London A skinhead is a member of a subculture originated among working class youths in London, England, in the 1960s and soon spread to other parts of the United Kingdom, with a second working class skinhead movement emerging worldwide in the 1980s. Motivated by social alienation and working class solidarity, skinheads (often shortened to "skins") are defined by their close-cropped or shaven heads and working-class clothing such as Dr. Martens and steel toe work boots, braces, high rise and varying length straight-leg jeans, and button-down collar shirts, usually slim fitting in check or plain. The movement reached a peak during the 1960s, experienced a revival in the 1980s, and, since then, has endured in multiple contexts worldwide. History[edit] Origins and first wave[edit] Second wave[edit] Eventually different interpretations of the skinhead subculture expanded beyond Britain and continental Europe. Germany[edit]

Mod (subculture) Mod is a British youth subculture of the early to mid-1960s and was briefly revived in later decades. Focused on music and fashion, the subculture has its roots in a small group of London-based stylish young men in the late 1950s who were termed modernists because they listened to modern jazz.[1] Significant elements of the mod subculture include fashion (often tailor-made suits); music (including soul, ska, and R&B); and motor scooters (usually Lambretta or Vespa). The original mod scene was associated with amphetamine-fuelled all-night dancing at clubs.[2] There was a mod revival in the United Kingdom in the late 1970s, which was followed by a mod revival in North America in the early 1980s, particularly in Southern California.[3][4] Paul Jobling and David Crowley argue that the definition of mod can be difficult to pin down, because throughout the subculture's original era, it was "prone to continuous reinvention By the summer of 1966, the mod scene was in sharp decline.

31 Rarely-Seen Nirvana Photos and Videos « Today, on my way to the COED offices in Chelsea, I walked by this street poster announcing the November 3rd re-release of Nirvana’s 1989 debut album, Bleach. We’ve all seen Nirvana’s iconic “Unplugged” performance, read all the stories about the bands quick rise and fall with the death of 27 year-old front man, Kurt Cobain. So to celebrate this awesome re-release we want to give you something a little different. (click thumbnails to see full image) Early Show At Krist Novoselic‘s Mom’s house One of the earliest videos of the band. Negative Creep at Rhino Records On June 23, 1989, a 22-year-old Kurt Cobain and three members of this early version of Nirvana performed a showcase at Rhino Records to support their album “Bleach” that was released eight days before. First Live Performance Of “Smells Like Teen Spirit” “Smells Like Teen Spirit” was first performed live on April 17, 1991 at the OK Hotel in Seattle, Washington – this is the video fromt hat performance. Pre-Show Jam Session

The Skatalites History[edit] Before the Skatalites: 1954-64[edit] Though McCook was the first in the band to record, he did not participate in the recording sessions with the other nine musicians. He left Jamaica in 1954 for a jazz gig at the Zanzibar Club in Nassau, Bahamas. He returned to Jamaica in June 1962, and began playing regular jazz sessions around Kingston. Coxsone Dodd searched for jazz players around Kingston and was impressed by McCook's playing. Early years: 1964-65[edit] They played their first show on 27 June at the Hi-Hat club, on Water Lane in Rae Town, which was owned and operated by Orville "Billy" Farnum. In fall 1964, Don Drummond's composition "Man in the Street" entered the Top 10 in the UK. Early reunions: 1974-88[edit] The Skatalites first reunion happened in the studio, during 1974 sessions for bass player Lloyd Brevett's solo album. In 1979, The Skatalites again joined in the studio, this time to record an album for Chris Blackwell. 1989-present[edit] Personnel[edit]

Tommy McCook Tommy McCook (3 March 1927 – 5 May 1998) was a Jamaican saxophonist. A founding member of The Skatalites, he also directed The Supersonics for Duke Reid, and backed many sessions for Bunny Lee or with The Revolutionaries at Channel One Studios in the 1970s. Biography[edit] McCook was born in Havana, Cuba, and moved to Jamaica in 1933. During the 1960s and 1970s McCook recorded with the majority of prominent reggae artists of the era, working particularly with producer Bunny Lee and his house band, The Aggrovators, as well as being featured prominently in the recordings of Yabby You and the Prophets (most notably on version sides and extended disco mixes), all while still performing and recording with the variety of line ups under the Skatalites name. McCook died of pneumonia and heart failure, aged 71, on 5 May 1998.[1] Discography[edit] With The Skatalites Tommy McCook & The Skatalites - The Skatalite! With Bobby Ellis Green Mango - 1974 - AttackBlazing Horns - 1977 - Grove Music

Roland Alphonso Roland Alphonso OD or Rolando Alphonso aka "The Chief Musician" (12 January 1931, Havana, Cuba - 20 November 1998, Los Angeles, California, United States)[1] was a Jamaican tenor saxophonist, and one of the founding members of The Skatalites. Biography[edit] Born in Havana, Cuba, Alphonso came to Jamaica at the age of two with his Jamaican mother, and started to learn saxophone at the Stony Hill Industrial School.[2] By 1960, he was recording for many other producers such as Duke Reid, Lloyd "The Matador" Daley and King Edwards, as well as continuing to work for Dodd, contributing alto, tenor, and baritone saxophones, and flute to recordings.[2] During this period he played in many different bands, such as The Alley Cats, The City Slickers, and Aubrey Adams & The Dew Droppers. In 1963, after few months spent in Nassau, Bahamas, he took part in the creation of The Studio One Orchestra, the first session band at Dodd's newly opened recording studio. Discography[edit] Notes[edit]

Lloyd Brevett Lloyd Brevett OD (1 August 1931 – 3 May 2012) was a Jamaican double bassist, songwriter, and a founding member of The Skatalites. He was a rastafarian, and a brother of The Melodians member, Tony Brevett. Biography[edit] Born in Kingston, Jamaica, Brevett was a founding member in 1964 of the ska band The Skatalites.[1] He toured many countries with The Skatalites, and produced two Skatalites' albums, African Roots (1975) and The Legendary Skatalites (1976). Brevett was awarded the Order of Distinction by the Jamaican government in 1981, and the silver Musgrave Medal in October 2010.[3] He toured and recorded with The Skatalites from the beginning of their reunion until 2004, when he was removed from the group after conflicts with newer members.[4] Brevett toured briefly with his own band, and then retired to Jamaica in 2005. On 3 May 2012, Brevett died at Andrews Memorial Hospital in St. References[edit] External links[edit]

Lloyd Knibb Lloyd Knibb OD (8 March 1931 – 12 May 2011) was a Jamaican drummer who is primarily known for his contribution to the development of the rhythm of the Ska era. He played for The Skatalites (in the 1960s up to his death), and for Tommy McCook & The Supersonics. Knibb recorded for the producers Lloyd "Matador" Daley and Duke Reid. Biography[edit] In his later years, Knibb resided in Hull, Massachusetts with his long time friend and fellow musician, John, and his wife, Adele. Knibb's contribution to Jamaican music was recognized by the Prime Minister's Award, the Order of Distinction (Officer Class), the Silver Musgrave Medal, and induction into the Jamaican Music Hall of Fame.[1][3] Knibb was taken ill while on tour in Brazil.[1] On 12 May 2011, after being ill for some time with liver cancer and receiving treatment in the USA, he was told by doctors that he only had days to live.[1] Knibb traveled back to his home in St. References[edit]