Story. More than 3,000 aboriginal children died at residential schools, often of causes that could have been prevented, and the failures of those responsible for properly safeguarding the students bordered on criminal, according to a special report on the scandal. 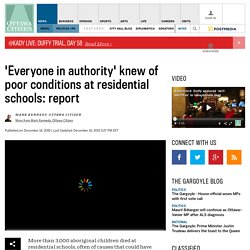 In its final report to be released Tuesday, the Truth and Reconciliation Commission (TRC) provides a detailed account of the known deaths. The recorded figure is 3,201 but the actual number is probably much higher because of incomplete records, and the commission notes the death rate was much higher than among children in Canada’s general population.

Its report documents how the children were buried in gravesites, many unmarked, that were not in their own communities. Today, many of those gravesites sit untended – the final injustice to the children. Government, church, and school officials were well aware of these failures and their impact on student health. “Many students who went to residential school never returned. Latest Breaking News. First Nation reserves prior to 1960s were ‘open-air prisons,’ says Saskatoon filmmaker behind The Pass System. Life was far from simple if you were First Nations living on reserve prior to 1960. 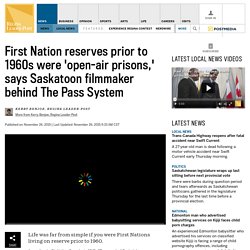 According to Statistics Canada, in 1941, 67 per cent of Saskatchewan residents lived in rural areas. The Second World War was raging and although First Nations could volunteer to serve they were not allowed to leave the reserve without a pass issued by the local Indian agent. “It was segregation,” said Alex Williams a documentary filmmaker and a former Saskatoon resident. “Reserves were open-air prisons. He spent five years researching and compiling information for his film, The Pass System. During his pursuit for information, he met the Pete family from Little Pine First Nation who hold one of the last passes issued in the province. Jacob Pete said his uncle Anthony left the reserve often because he was a trapper, horse trader and barterer. Government Indian Policy in Canada, History. 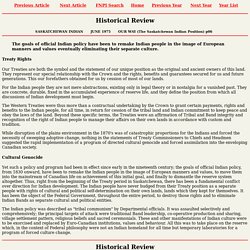 Potlatch. Historically the potlatch was a highly regulated and elaborate gift-giving feast common to most Northwest Coast Aboriginal groups. 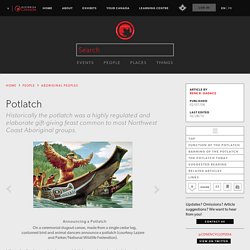 Announcing a Potlatch On a ceremonial dugout canoe, made from a single cedar log, costumed bird and animal dancers announce a potlatch (courtesy Lazare and Parker/National Wildlife Federation). Potlatch Regalia Dance regalia given up by Kwakiutl who attended Dan Cranmer's potlatch in 1921 at the village of Alert Bay, NWT (courtesy Royal British Columbia Museum). Copper Queen Charlotte Islands, BC, Haida. Historically the potlatch was a highly regulated and elaborate gift-giving feast common to most Northwest Coast Aboriginal groups. Potlatch Ban: abolishment of First Nations ceremonies. When the British North America (BNA) Act was passed in 1867, Canada became a country but remained a colony of the British Empire.

The BNA Act provided the basic governmental structures and laws by which Canada would govern its peoples. One section in particular - section 91(24) - defined the relationship between the government and Aboriginal Peoples, echoes of which continues to define the relationship to this day. Ban traditional practice. The Indian Act of Canada: Origins. Legislation Concerning Canada's First Peoples Government legislation on Indians was all aimed at assimilation. 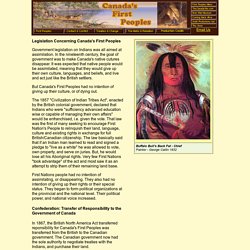 In the nineteenth century, the goal of government was to make Canada's native cutures disappear. It was expected that native people would be assimilated, meaning that they would give up their own culture, languages, and beliefs, and live and act just like the British settlers. But Canada's First Peoples had no intention of giving up their culture, or of dying out. The 1857 "Civilization of Indian Tribes Act", enacted by the British colonial government, declared that Indians who were "sufficiency advanced education wise or capable of managing their own affairs" would be enfranchised, i.e. given the vote. 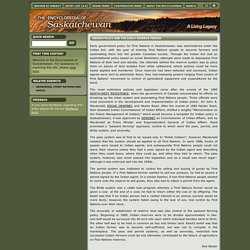 Through the Indian Act and an assimilationist policy based on social Darwinism, attempts were made to dispossess First Nations of their land and identity: the rationale behind the reserve system was to place them on pieces of land isolated from white settlement, where policies could be more easily applied and monitored. Once reserves had been selected and surveyed, Indian agents were sent to administer them; they had sweeping powers ranging from control of First Nations’ movement to control of agricultural equipment and expenditures by the band. Indian Act and the Pass System. “No rebel Indians should be allowed off the Reserves without a pass signed by an I.D. official.The dangers of complications with white men will thus be lessened. 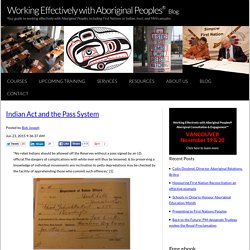 & by preserving a knowledge of individual movements any inclination to petty depredations may be checked by the facility of apprehending those who commit such offences.” [1] This article is another in our series on the restrictive policies of the Indian Act over the decades since its inception in 1876. Following the Red River Rebellion (1869–1870) and Northwest Rebellion (1885) immigration to Saskatchewan slowed down, which interrupted the plans of Prime Minister John A.

Encyclopedia of the Great Plains.