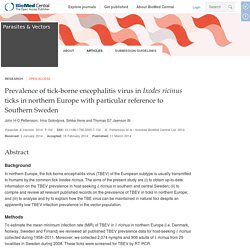 One of these pathogens potentially causing human disease is the tick-borne encephalitis virus (TBEV), a member of the tick-borne group within the genus Flavivirus[3], family Flaviviridae [4]. Tick-borne encephalitis (TBE) is a potentially fatal disease syndrome of humans and some other mammals [5]. TBE is endemic in central, eastern, and northern Europe eastwards through Russian Siberia and China [6, 7, 8]. During the last two decades, 1990–2009, an annual mean incidence of 2,815 cases of human TBE was recorded for Europe, while a corresponding annual mean incidence of 5,682 human TBE cases was reported from Russia [7]. Currently, the TBEV complex is considered to encompass three virus subtypes; the European (TBEV-Eu), the Far-Eastern (TBEV-Fe), and the Siberian TBEV (TBEV-Sib) [4, 5, 9].

PLOS 07/12/15 The Willingness to Pay for Vaccination against Tick-Borne Encephalitis and Implications for Public Health Policy: Evidence from Sweden. Abstract The increasing incidence of tick-borne encephalitis (TBE) in Sweden and several other European countries has sparked a discussion about the need for a public vaccination strategy. 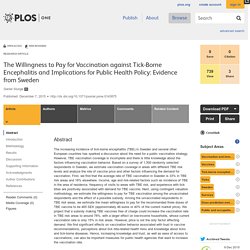 However, TBE vaccination coverage is incomplete and there is little knowledge about the factors influencing vaccination behavior. Based on a survey of 1,500 randomly selected respondents in Sweden, we estimate vaccination coverage in areas with different TBE risk levels and analyze the role of vaccine price and other factors influencing the demand for vaccination. First, we find that the average rate of TBE vaccination in Sweden is 33% in TBE risk areas and 18% elsewhere. Income, age and risk-related factors such as incidence of TBE in the area of residence, frequency of visits to areas with TBE risk, and experience with tick bites are positively associated with demand for TBE vaccine. Editor: Utpal Pal, University of Maryland, College Park, UNITED STATES Copyright: © 2015 Daniel Slunge. 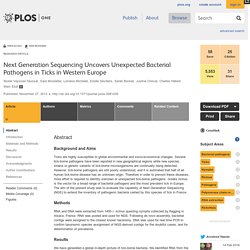 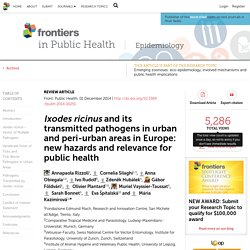 Ticks are known to transmit a great variety of pathogenic agents producing the highest number of human disease cases compared to other vector-borne diseases in Europe (1, 2). In general, the eco-epidemiology of zoonotic vector-borne diseases is very complex. It depends on the interactions of the vectors with the reservoir hosts and the pathogenic agents, which are modulated by several abiotic and biotic factors that vary in space and time.

Certain tick-borne infections have recently been emerging in new regions or re-emerging within endemic sites and create an increasing concern for public health, food security, and biodiversity conservation (3–5). Urbanization as one of the socio-demographic factors has increased worldwide in recent decades (11, 12). Urban areas are highly fragmented environments composed of a mosaic of patches of various sizes, vegetation, and land-use types. Figure 1. Birds. Eurosurveillance, Volume 15, Issue 27, 08 July 2010 Au sommaire: Human activities predominate in determining changing incidence of tick-borne encephalitis in Europe. Explanations for the dynamics of tick-borne disease systems usually focus on changes in the transmission potential in natural enzootic cycles. 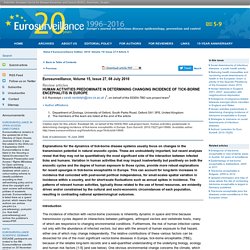 These are undoubtedly important, but recent analyses reveal that they may not be quantitatively the most significant side of the interaction between infected ticks and humans. Variation in human activities that may impact inadvertently but positively on both the enzootic cycles and the degree of human exposure to those cycles, provide more robust explanations for recent upsurges in tick-borne encephalitis in Europe. This can account for long-term increases in incidence that coincided with post-soviet political independence, for small-scales spatial variation in incidence within a country, and for short-scale fluctuations such as annual spikes in incidence. Introduction Figure 1. No single factor is likely to cause such a pattern. Long-term impacts from political independence Small-scale impacts of land cover, land use and land tenure Figure 2. EUROSURVEILLANCE 29/09/11 Au sommaire: Tick-borne encephalitis in Europe, 2007 to 2009. 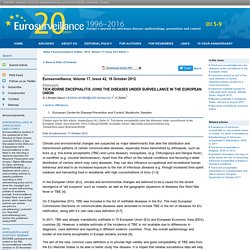 Tick-borne encephalitis joins the diseases under surveillance in the European Union. Euro Surveill. 2012;17(42):pii=20299. Available online: Date of submission: 17 October 2012 Climate and environmental changes are suspected as major determinants that alter the distribution and transmission patterns of certain communicable diseases, especially those transmitted by arthropods, such as ticks (e.g. tick-borne encephalitis (TBE) and Lyme disease), mosquitoes, (e.g. In the European Union (EU), climate and environmental changes are believed to be a cause for the recent resurgence of ‘old suspects’ such as malaria, as well as the geographic expansion of diseases like West Nile fever or TBE [4]. On 5 September 2012, TBE was included in the list of notifiable diseases in the EU.

References. EFSA 29/09/10 Scientific Opinion on Geographic Distribution of Tick-borne Infections and their Vectors in Europe and the other Regions of the Mediterranean Basin. EFSA - 2012 - Systematic literature review on the occurrence of ticks and tick-borne pathogens in the EU and Mediterranean Basin. ECDC 18/09/12 New ECDC report on epidemiological situation of tick-borne encephalitis (TBE) in Europe. ECDC publishes today a report on the epidemiological situation of tick-borne encephalitis (TBE) and TBE surveillance systems in EU and EFTA. 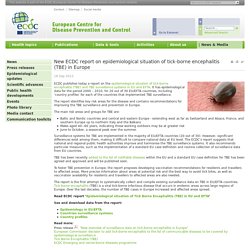 It has epidemiological data for the period 2000 – 2010, for 20 out of 30 EU/EFTA countries, including ‘country profiles’ for each of the countries that implemented TBE surveillance. The report identifies key risk areas for the disease and contains recommendations for improving the TBE surveillance and prevention in Europe. The main risk areas and groups for TBE are: Baltic and Nordic countries and central and eastern Europe - extending west as far as Switzerland and Alsace, France, and southern Europe up to northern Italy and the BalkansMales aged 40-–60 years, indicating those working outdoors may be at greater riskJune to October, a seasonal peak over the summer.

Surveillance systems for TBE are implemented in the majority of EU/EFTA countries (20 out of 30). See and download data from the report: Read more:Press release. ECDC 03/02/15 Get ready for the tick season: ECDC updated communication toolkit on tick-borne diseases in Europe. ​ECDC releases today an update of its tick-borne diseases communication toolkit. 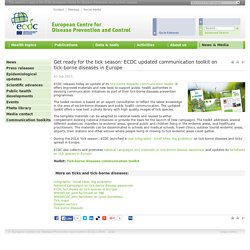 It offers improved materials and new tools to support public health authorities in devising communication initiatives as part of their tick-borne diseases prevention programmes. The toolkit revision is based on an expert consultation to reflect the latest knowledge in the area of vector-borne diseases and public health communication. The updated toolkit offers a new tool: a photo library with high quality images of tick species. The template materials can be adapted to national needs and reused to either complement existing national initiatives or provide the basis for the launch of new campaigns. The toolkit addresses several different audiences: travellers to endemic areas, general public and children living in the endemic areas, and healthcare practitioners. 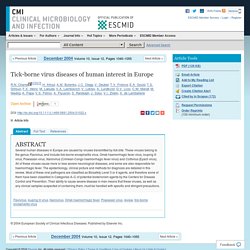 These viruses belong to the genus Flavivirus, and include tick-borne encephalitis virus, Omsk haemorrhagic fever virus, louping ill virus, Powassan virus, Nairovirus (Crimean-Congo haemorrhagic fever virus) and Coltivirus (Eyach virus). All of these viruses cause more or less severe neurological diseases, and some are also responsible for haemorrhagic fever. The epidemiology, clinical picture and methods for diagnosis are detailed in this review. Most of these viral pathogens are classified as Biosafety Level 3 or 4 agents, and therefore some of them have been classified in Categories A–C of potential bioterrorism agents by the Centers for Disease Control and Prevention. Their ability to cause severe disease in man means that these viruses, as well as any clinical samples suspected of containing them, must be handled with specific and stringent precautions. Clinical Microbiology and Infection Volume 10, Issue 12, December 2004, Guidelines for the diagnosis of tick-borne bacterial diseases in Europe. 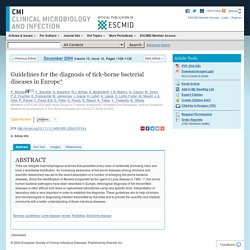