Six Tips to Help You Remember Your Lines 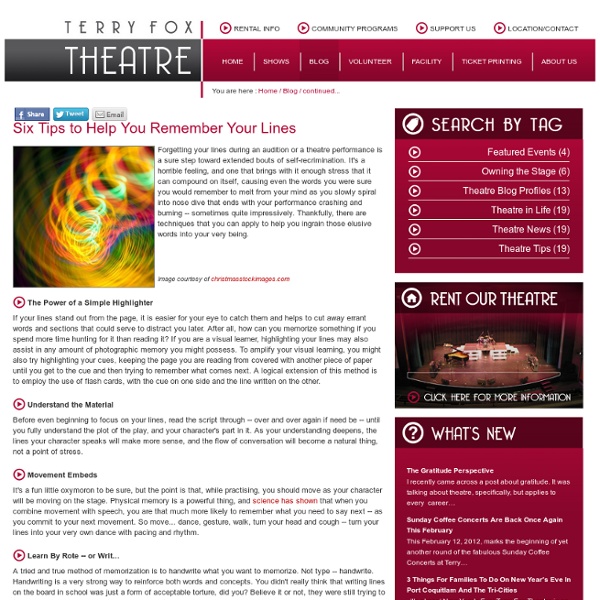 K-MODDL > Tutorials > Reuleaux Triangle If an enormously heavy object has to be moved from one spot to another, it may not be practical to move it on wheels. Instead the object is placed on a flat platform that in turn rests on cylindrical rollers (Figure 1). As the platform is pushed forward, the rollers left behind are picked up and put down in front. An object moved this way over a flat horizontal surface does not bob up and down as it rolls along. 10 Best Acting Schools In The World If you are considering a career as an actor, then don’t cheat yourself out of a successful career;try to get into one of the 10 best acting schools in the world. Attending one of these 10 best acting schools in the world will surely put you ahead of the rest come audition time. The Juilliard School. This ultra-competitive institution is more difficult than Harvard to get into. It is widely considered to be the best acting school in the world.

6 Red Flags When Auditing Acting Classes By Joseph Pearlman | Posted March 8, 2013, 4 p.m. I encourage all actors to audit classes when shopping for a new teacher. It’s a lot like dating. When looking for a new acting teacher, you’re looking for a new partner (just not a romantic one). Few people in the dating scene strike gold right away—part of the reason for this, they’ll tell you, is because of all the freaks and egomaniacs out there. The same is true for acting teachers; there are just as many freaks and egomaniacs who make acting class their own personal springboard for feeling important or for not doing the hard work a teacher needs to do.

What we SHOULD have been taught in our senior year of high school All artwork and content on this site is Copyright © 2015 Matthew Inman. Please don't steal. TheOatmeal.com was lovingly built using CakePHP All artwork and content on this site is Copyright © 2015 Matthew Inman. How To Choose An Outfit For Your Audition By Carolyne Barry | Posted March 19, 2013, 12:17 p.m. The right clothes help actors to look and feel the part and often help establish their type. Actors can create a different persona, depending on what they're wearing. An expensive suit will create a different look and quality than jeans and a t-shirt. Uniforms, dressy evening attire, and camping outfits create distinct looks, and you usually feel different when wearing each. The clothes that you wear to auditions can often influence how directors, agency executives, and clients view you, and they can also be a subliminal callback and booking factor.

Epicycloid The path traced out by a point on the edge of a circle of radius rolling on the outside of a circle of radius . An epicycloid is therefore an epitrochoid with How Mathematics Can Make Smart People Dumb - Ben O'Neill Mathematics can sometimes make smart people dumb. Let me explain what I mean by this. I don't mean that it is dumb not to be good at mathematics. After all, mathematics is a highly abstract and challenging discipline requiring many years (decades even) of study, and there are plenty of very smart people who have little understanding of it, and little ability to use it. What I mean is that mathematics quite often bamboozles people into accepting very silly arguments — arguments that are so silly that if you stated them without draping them in mathematical negligee, you would instantly become an object of ridicule to all those people who flunked out at basic algebra back in high school.

Related:
Related:  Cracking ACT Reading   -  "Love Makes Us Act Like We Are Fools" Can This Be Avoided?   -  Three-Act Math   -  The Indian Act   -  Medieval Castle History, Design of Medieval Castles, Haunted Castles: www.medieval-castle.com   -  Psychological ("personality") Types   -  skeleton.png (PNG Image, 1500 × 1200 pixels) - Scaled (68%)   -  Musicals & Lyrics - Lyrics For The West End Musicals   -  The Alignment System   -  101questions   -  This Infographic Reveals the Secrets of the Happiest Couples   -  Cheat Sheets for Writing Body Language   -  Find the Perfect Word for Your Feelings with This Vocabulary Wheel   -  Relationship Rules   -  Calm - The #1 App for Meditation and Sleep   -  Mapping Emotions On The Body: Love Makes Us Warm All Over