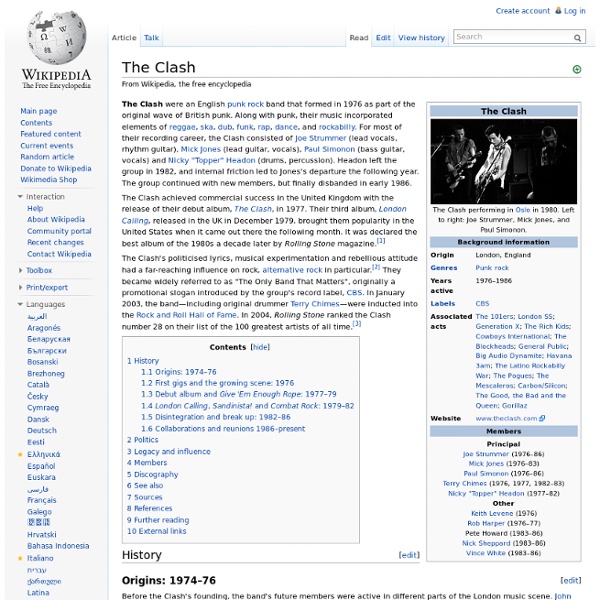 The Clash's politicised lyrics, musical experimentation, promotion of DIY ethics and rebellious attitude had a far-reaching influence on rock, alternative rock in particular.[2] They became widely referred to as "The Only Band That Matters", originally a promotional slogan introduced by the group's record label, CBS. In January 2003, the band—including original drummer Terry Chimes—were inducted into the Rock and Roll Hall of Fame. In 2004, Rolling Stone ranked the Clash number 28 on their list of the 100 greatest artists of all time.[3] History[edit] Origins: 1974–76[edit] The act was still searching for a lead singer. "so I went out in the crowd which was fairly sparse. On 30 May, Rhodes and Levene met surreptitiously with Strummer after a 101'ers gig. Early gigs and the growing scene: 1976[edit] With Rhodes insisting that the band not perform live again until they were much tighter, the Clash rehearsed intensely over the following month. Punk outbreak and UK fame: 1977–79[edit]

Sex Pistols The Sex Pistols were an English punk rock band that formed in London in 1975. They were responsible for initiating the punk movement in the United Kingdom and inspiring many later punk and alternative rock musicians. Although their original career lasted just two-and-a-half years and produced only four singles and one studio album, Never Mind the Bollocks, Here's the Sex Pistols, they are regarded as one of the most influential acts in the history of popular music.[1][2] In January 1978, at the end of a turbulent tour of the United States, Rotten left the Sex Pistols and announced its break-up. Over the next several months, the three other band members recorded songs for McLaren's film version of the Sex Pistols' story, The Great Rock 'n' Roll Swindle. History[edit] Origins and early days[edit] The group had been rehearsing regularly, overseen by McLaren's friend Bernard Rhodes, and had performed publicly for the first time. John Lydon joins the band[edit] Building a following[edit]

Rude Boy (film) Rude Boy is a 1980 British film directed by Jack Hazan and David Mingay and filmed in 1978 and early 1979. The film, part fiction, part rockumentary, tells the story of Ray Gange, a Clash fan who leaves his job in a Soho sex shop to become a roadie for the band.[1][2][3] The film includes footage of The Clash at a Rock Against Racism concert at Victoria Park,[1] on their "On Parole" and "Sort It Out" tours,[4] and in the studio recording the album Give 'Em Enough Rope. The film was named after the rude boy subculture. The band became so disenchanted with the film, that by its release, they had Better Badges make badges stating 'I don't want Rude Boy Clash Film'.[5] The cast included (in alphabetical order):[2]

Ray Gange Rude Boy[edit] Before starring in Rude Boy, Ray Gange worked in a record shop in Soho, London, England. Gange knew of The Clash and was friends with Joe Strummer. The two met in a pub in Putney at a time when Strummer lived by Regent's Park. While working at the record shop, Gange met David Mingay and learned that he was planning to make a film on the band. Gange was signed on to play a roadie. Other work[edit] During the early 1980s, Gange formed the short-lived record label Gange's Records in order to release records for punk-blues band the Folk Devils, a band which he was then managing. In 1997 he obtained a Fine Arts degree from Chelsea School of Art and has since been working in the fields of sculpture and painting with many works in the hands of private collectors. In 2009 he toured with the Alarm, Los Mondo Bongo and the Mahones as DJ. As of 2010, he is touring with Dropkick Murphys, Sick Of It All and the Mahones as DJ. Personal life[edit] He has a son.[2] References[edit]

eliteemusic Ska Etymology[edit] There are different theories about the origins of the word ska. Ernest Ranglin claimed that the term was coined by musicians to refer to the "skat! skat! History[edit] Byron Lee & the Dragonaires performed ska with Prince Buster, Eric "Monty" Morris, and Jimmy Cliff at the 1964 New York World's Fair. 2 Tone[edit] Third wave [edit] Third wave ska originated in the 1980s and became commercially successful in the 1990s. United States[edit] The mid-1990s saw a considerable rise in ska music's underground popularity, marked by the formation of many ska-based record labels, booking organizations and indie zines. By the late 1990s, mainstream interest in third wave ska bands waned as other music genres gained momentum.[35] Moon Ska Records folded in 2000, but Moon Ska Europe, a licensed affiliate based in Europe, continued operating in the 2000s and was later relaunched as Moon Ska World. United Kingdom[edit] Germany, Australia, Japan and South America[edit]