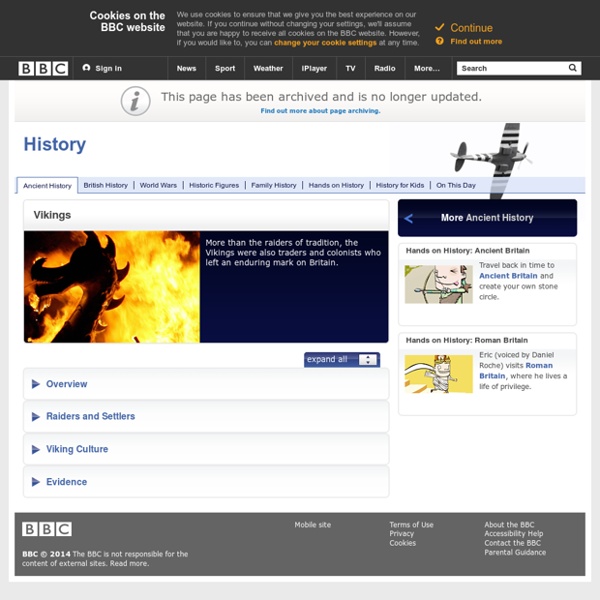 Secrets of Lost Empires Welcome to the companion Web site to the NOVA program "Medieval Siege," scheduled for broadcast on January 24, 2006. In the film, which is a part of the NOVA series Secrets of Lost Empires, a team of timber framers and other specialists design, build, and fire a pair of trebuchets, a devastating engine of war popular in the Middle Ages. Here's what you'll find online: Medieval Arms Race The trebuchet was only the most frightening of the weapons early European warriors employed in siege warfare.

Viking history The Vikings themselves did not write down their historical events. Historians have had to use other, more indirect means of reconstructing what Viking life was like. The Eastern Route A thousand years ago the Vikings traveled the Eastern Route, to the huge market places in Russia. stle Builder Image Copyright 1995 by Educational Management Group, Inc. During the Medieval era of history, life was lived by a very different set of political, economic, and social rules. The only form of government was a Monarchy where the king or queen ruled by "divine right."

Viking Sea-faring Danes depicted invading England. Illuminated illustration from the 12th century Miscellany on the Life of St. Edmund. Pierpont Morgan Library. A Medieval Mystery This lesson is suitable for KS3 History Unit 19: 'How and why did the Holocaust happen?' and could also be used to support Citizenship at KS3 Unit 4: 'Britain - a diverse society?'. The cartoon depicts the profoundly negative way in which Jews were viewed in 13th century England. Their situation did not improve. In 1290 King Edward I expelled every Jew from England, the first time this had happened anywhere in Europe. Thousands of men, women and children were forced to leave for the Continent and Jews were not officially allowed to live in Britain again until 1655.

"The Wrath of the Northmen": The Vikings and their Memory "The Wrath of the Northmen": The Vikings and their Memory by Christina von Nolckenou won't be surprised that the Vikings were normally viewed by those they came up against in a markedly negative light. Certainly this was true in England, the area most of our early records come from, and the one I am most familiar with. Indeed, the story of the Vikings is usually taken--and not just by English historians--as starting and ending with events in England. The end is often considered to be the 1066 invasion of England by the Normans (originally Vikings themselves who had settled in northern France and adopted the language they found there), though Viking-type raids continued, especially in the Scottish islands, until about the end of the twelfth century. The beginning of the Vikings' recorded story--which coincides with the beginning of recorded history for Norway--is usually marked by a Viking raid on a northern English monastery in 793. 787 [789].

Magna Carta: Cornerstone of the U.S. Constitution At the death of his brother, Richard the Lionhearted, John assumed the throne of England, intent on exercising power to achieve his own selfish ends. To fund military campaigns in France, he extracted exorbitant fees from nobles, who, in turn, raised the rents imposed on their tenants. At the same time, John reduced the lords' customary powers over those tenants, restricting, for example, their power to hold court for those living on their feudal lands. He attempted to influence church elections and confiscated church properties, alienating the powerful ecclesiastical establishment and depriving the poor of the only source of relief available to paupers. Norsemen Map showing area of Norse settlements during the 8th to 11th centuries (the Viking Age), including Norman conquests, some extending after this period (yellow). Trade and raid routes, often inseparable, are marked. Norsemen refers to the group of people as a whole who spoke what is now called the Old Norse language, belonging to the North Germanic branch of the Indo-European languages, especially Norwegian, Icelandic, Faroese, Swedish, and Danish in their earlier forms. Norseman means "people from the North" and applied primarily to Nordic people from southern and central[citation needed] Scandinavia. They established states and settlements in areas that are now part of the Faroe Islands, England, Scotland, Wales, Iceland, Finland, Ireland, Russia, Canada, Greenland, France, Ukraine, Estonia, Latvia, Lithuania, Poland, and Germany, as well as outposts in Sicily and North America.

ChronoZoom ChronoZoom is an educational tool for teachers and students who want to put historical events in perspective. A great many resources have been created already in ChronoZoom for your enjoyment and enlightenment. Start Exploring Use ChronoZoom to get a perspective of the extensive scale of time and historical events relative to what happened around the world. Become an author yourself!

History & Archaeology Editor’s Note: This article was adapted from its original form and updated to include new information for Smithsonian’s Mysteries of the Ancient World bookazine published in Fall 2009. From his bench toward the stern of the Sea Stallion from Glendalough, Erik Nielsen could see his crewmates’ stricken faces peering out of bright-red survival suits. A few feet behind him, the leather straps holding the ship’s rudder to its side had snapped. The 98-foot vessel, a nearly $2.5 million replica of a thousand-year-old Viking ship, was rolling helplessly atop waves 15 feet high. Annenberg Media Exhibits: Collapse Hundreds of years ago in what is now modern Honduras, Copán was a thriving civilization, a center of the cultural life of the Maya. Tens of thousands of people made their home in the Copán Valley. Yet despite its importance, Copán went into decline. Across the vast territory of the ancient Maya, other important sites were sharing a similar fate. Classic Maya civilization was collapsing. Why did this great civilization fall?