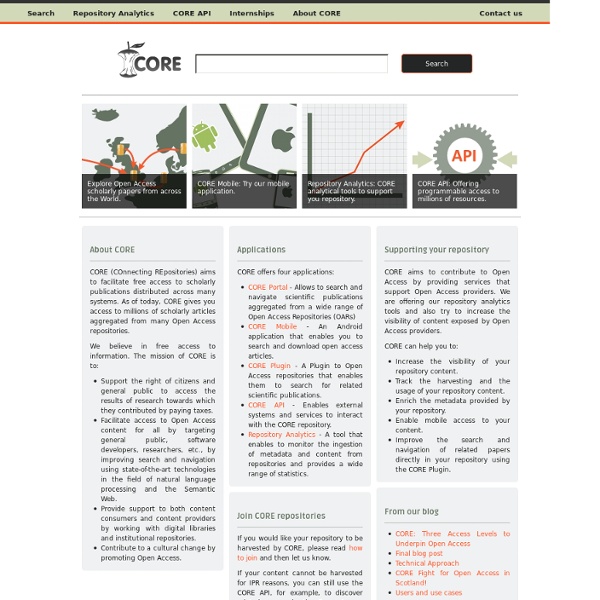 UK’s open access full-text search engine to aid research Open access research is now more accessible as Jisc has developed a new search engine to help academics, students and the general public navigate papers held in the UK’s open access repositories. Jisc has funded the Open University’s Knowledge Media Institute (KMi) to create an innovative new search facility which searches not just the abstract but the full text of the article. When researchers use current systems like Google Scholar to search academic papers they can find themselves denied access to the full article, particularly when subscription fees are required. They also typically have to search across a number of open access repositories or use searches that harvest data from different sources.

Will the Real Scott Wilson Please Stand Up, Please Stand Up The Microsoft Academic Search Service At the recent Science Online London (SOLO) 2011 conference I attended a session on the Microsoft Academic Search service. There seem to have been a lot of developments to this service since I first signed up for it shortly it had been announced. I couldn’t get a decent feel for the service on my Android phone at the session since it uses Silverlight which isn’t supported on my phone. However the tweets for the session were curated using Storify and these resources have been embedded in a post on the Nature blog which includes Twitter summaries of the third breakout sessions.From these useful notes I find that: I was impressed by the functionality and user interface.

Licensing Data as Open Data One of the findings that has emerged clearly from the UK OER Programme and from the UK Discovery work is that for a healthy content ecosystem, information about the content needs to be available to many different systems, services and users. Appropriately licensing the metadata and feeds is crucial to downstream discovery and use. The OER IPR Support Project have developed this fabulous animation to introduce the importance of open data licensing in an engaging way. It was developed out of the UK OER Programme but informed by the work of several other areas including UK Discovery, Managing Research Data, the Strategic Content Alliance, and sharing XCRI course feeds. With thanks to the many people who helped in the storyboarding, scripting and feedback: particularly Phil Barker, Tony Hirst and Martin Hawskey.

Practitioner-led Action Research 2014 Practitioners were encouraged to think of their audience and context before deciding on the format for their research report. You can access the emCETT practitioner-led action research projects via the theme links below. Please note some of the reports you will read and watch are made using interactive, dynamic tools. This means that you may be able to add feedback or other content.

Zanran – a new data search engine « Find It Out – Research Secrets and More I’ve been playing with a new data search engine called Zanran – that focuses on finding numerical and graphical data. The site is in an early beta. Nevertheless my initial tests brought up material that would only have been found using an advanced search on Google – if you were lucky. As such, Zanran promises to be a great addition for advanced data searching. Zanran.com - Front Page Zanran focuses on finding what it calls ‘semi-structured’ data on the web.

Exploring open access to save monographs, the question is – how? You've just spent years researching and then writing your monograph. This is the book that will kick start your career – your proposal was accepted by your top publisher - you got great comments back from the peer reviewers - you've negotiated a great front cover and the blurb is short and snappy. You can't wait to have the book in your hands and show your mum, flaunt it under the nose of the VC and place it on your bookshelf. Yes it's going to look great in your new office and the citations will start flowing soon.

CARN: Welcome Hard copy editions of all bulletins can be obtained at a cost of £8 for non-CARN members, £3 CARN for members including p&p. Please contact Charmian Wilby on carn@mmu.ac.uk for copies. Bulletin 17 is from the conference held in Asford, Kent entitled: Towards Creative Action: Transformations and Collaborations in Practice. It is edited by Sally Hardy. The Bulletin is arranged into three sections (as coloured ribbons). Bing Adds Adaptive Search, Customized by Your Search History Every search engine wants to be more relevant. However, what is relevant to you might not be relevant to someone else. Further, many search terms can take on different meanings. "Summertime" might mean sun and heat to some, cold and snow or any number of song titles from George Gershwin to Will Smith to other people.

Open access will change the world, if scientists want it to While the Australian Research Council considers its policy on open-access publication and others within the scientific community call for the increased sharing of scientific data, the British are already a step ahead. They are implementing plans to make all publicly funded scientific research available to anyone by 2014 – for free. This signals a dramatic change for British universities and academics whose current scientific research is only available through expensive subscription-based journals. But as we edge closer to open-access publishing, there has been much hand-wringing among the scientific community. The dilemma is this: all scientists want to publish in high-impact journals but we also want our work accessible to as wide an audience as possible.