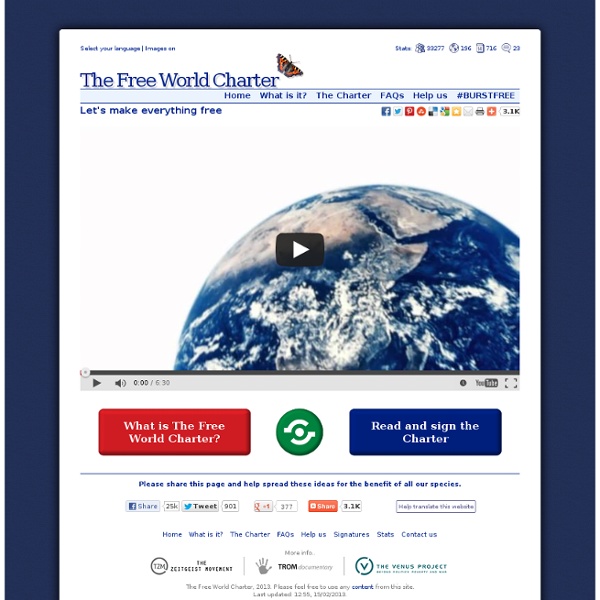 101 Fantastic Freebies - Page 13 Free. It's the magic word for an ever-expanding wealth of downloadable software and online services. Free doesn't necessarily mean good, however, and hunting for freebies can mean sifting through a lot of junk. That's where we come in. About GiftFlow's mission is to help individuals and organizations give and share goods and services with their communities by providing an online platform that is open-source and free. Latest from the GiftFlow Blog New year! Hello!

Out Of The Blue Until the current period or until the last 30 years, it was conventional wisdom, both in science and theology, we're alone in the universe; a single repository of life anywhere in the known universe. Well, no one believes that anymore. Out of the Blue presents unexplained cases from around the world, investigates 50 years of official contradictions and denials, and puts forth possible reasons for secrecy. Superhero Bias Followup to: The Halo Effect Suppose there's a heavily armed sociopath, a kidnapper with hostages, who has just rejected all requests for negotiation and announced his intent to start killing. In real life, the good guys don't usually kick down the door when the bad guy has hostages. But sometimes—very rarely, but sometimes—life imitates Hollywood to the extent of genuine good guys needing to smash through a door.

26 Places to Find Free Multimedia for Your Blog Nothing makes a blog post more eye-catching than a great header image, but not all publishers have artistic talent. And even accomplished digital creatives often crave some found material to start from or work with in a project. Luckily for all of the above, sources abound for finding a compelling photo to grab your readers' eyes and draw them in, or to locate fresh multimedia to remix. Creative Commons search You may be familiar with the Creative Commons free licenses that aim to give creators more freedom to allow sharing and remixing of their content. If not, you can find out more about the history of the organization and the different types of licenses from their About page. Best Inventions of the Year 2012 Marcin Jakubowski built a tractor in six days. Then he told the world how to do it: he made the designs, the budget and an instructional video available free online. A farmer and technologist and the founder of Open Source Ecology, Jakubowski has identified the 50 most important machines required for modern life—from the soil pulverizer to the oven—and is working to make a prototype of a low-cost DIY version of each so that anyone anywhere can build them. “If we can lower the barriers to farming, building and manufacturing,” he says, “then we can unleash massive amounts of human potential.”

10 TED Talks That Will Change the Way You Communicate August 1st, 2012 By: Alvina Lopez Even the most eloquent of public and private speakers could always stand to tweak their communication skills just a little bit. After all, the ability to convey feelings and facts stands as essential to keeping the human species rolling along. Both the Internet and bookshelves sport advice a-go-go on how to get points across as clearly as possible, and the venerable open source lecture series TED does not disappoint in this regard.

Propaganda 2.0 and the rise of 'narrative networks' DARPA, the Pentagon's advanced concepts think-tank, is looking to take propaganda to the next level and they're hoping to do so by controlling the very way their targets perceive and interpret the flow of incoming information. The Pentagon believes that by engaging in 'narrative control' they can alter an individual's grasp on reality and the way in which they evaluate current events. Simply put, DARPA is looking to shape minds with stories.