A radical experiment in empathy: Sam Richards at TEDxPSU 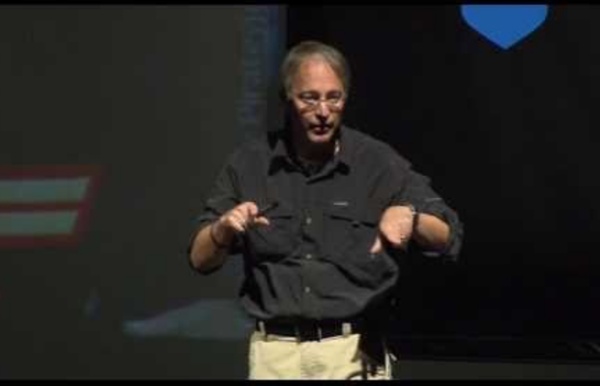 Scientists use brain imaging to reveal the movies in our mind BERKELEY — Imagine tapping into the mind of a coma patient, or watching one’s own dream on YouTube. With a cutting-edge blend of brain imaging and computer simulation, scientists at the University of California, Berkeley, are bringing these futuristic scenarios within reach. Using functional Magnetic Resonance Imaging (fMRI) and computational models, UC Berkeley researchers have succeeded in decoding and reconstructing people’s dynamic visual experiences – in this case, watching Hollywood movie trailers. As yet, the technology can only reconstruct movie clips people have already viewed. The approximate reconstruction (right) of a movie clip (left) is achieved through brain imaging and computer simulation “This is a major leap toward reconstructing internal imagery,” said Professor Jack Gallant, a UC Berkeley neuroscientist and coauthor of the study published online today (Sept. 22) in the journal Current Biology. “We need to know how the brain works in naturalistic conditions,” he said.

Awakening As One | uniting the way to the new world What does Putin want? A major analysis by Rostislav Ishchenko (must read!) | The Vineyard of the Saker Foreword by the Saker: The analysis below is, by far, the best I have seen since the beginning of the conflict in the Ukraine. I have regularly posted analyses by Ishchenko on this blog before, because I considered him as one of the best analysts in Russia. This time, however, Ishchenko has truly produced a masterpiece: a comprehensive analysis of the geostrategic position of Russia and a clear and, I believe, absolutely accurate analysis of the entire “Putin strategy” for the Ukraine. I have always said that this conflict is not about the Ukraine but about the future of the planet and that there is no “Novorussian” or even “Ukrainian” solution, but that the only possible outcome is a strategic victory of either Russia or the USA which will affect the entire planet. We all owe a huge debt of gratitude to Denis, Gideon and Robin for translating this seminal text, which was very difficult to translate. I strongly recommend that you all read this text very carefully. The Saker Notes:

How Trees Calm Us Down In 1984, a researcher named Roger Ulrich noticed a curious pattern among patients who were recovering from gallbladder surgery at a suburban hospital in Pennsylvania. Those who had been given rooms overlooking a small stand of deciduous trees were being discharged almost a day sooner, on average, than those in otherwise identical rooms whose windows faced a wall. The results seemed at once obvious—of course a leafy tableau is more therapeutic than a drab brick wall—and puzzling. Whatever curative property the trees possessed, how were they casting it through a pane of glass? That is the riddle that underlies a new study in the journal Scientific Reports by a team of researchers in the United States, Canada, and Australia, led by the University of Chicago psychology professor Marc Berman. Are such numbers fanciful? What is most interesting about this data, though, is one of its subtler details. It’s nice to think that research like this can affect public policy.

The Zeitgeist Film Series Gateway | Zeitgeist: The Movie, Zeitgeist: Addendum, Zeitgeist Moving Forward 5 Powerful Books That Changed the Direction of My Life Reader Resource Apply now to be an Entrepreneur 360™ company. Let us tell the world your success story. Get Started » Quiz time: Can you name Newton's first law of motion? No? Newton declared, "Every object in a state of uniform motion tends to remain in that state of motion unless an external force is applied to it." In other words, if you are flying in the International Space Station and toss an apple out the window (come on, use your imagination), it will keep going in that same direction forever, unless something stops it (like a planet, gravity or alien life form). Although Newton was talking about physics, little did he know he was also describing life. People tend to move in the same direction as they always have unless some external force is applied. Related: 50 Books That Transformed My Business and My Life This is why I read. A book is a powerful external force that can completely knock your life off its mundane straight line and change everything about who you are. 1. 2. 3. 4. 5.

The real Lord of the Flies: what happened when six boys were shipwrecked for 15 months | Books For centuries western culture has been permeated by the idea that humans are selfish creatures. That cynical image of humanity has been proclaimed in films and novels, history books and scientific research. But in the last 20 years, something extraordinary has happened. When I started writing a book about this more hopeful view, I knew there was one story I would have to address. On the very first day, the boys institute a democracy of sorts. By the time a British naval officer comes ashore, the island is a smouldering wasteland. This story never happened. I first read Lord of the Flies as a teenager. I began to wonder: had anyone ever studied what real children would do if they found themselves alone on a deserted island? The article did not provide any sources. I was bursting with questions. My wife Maartje and I rented a car in Brisbane and some three hours later arrived at our destination, a spot in the middle of nowhere that stumped Google Maps. But Peter noticed something odd.

Commanding Heights: Storyline | on PBS A global economy, energized by technological change and unprecedented flows of people and money, collapses in the wake of a terrorist attack .... The year is 1914. Worldwide war results, exhausting the resources of the great powers and convincing many that the economic system itself is to blame. From the ashes of the catastrophe, an intellectual and political struggle ignites between the powers of government and the forces of the marketplace, each determined to reinvent the world's economic order. Two individuals emerge whose ideas, shaped by very different experiences, will inform this debate and carry it forward. One is a brilliant, unconventional Englishman named John Maynard Keynes. But a worldwide depression holds the capitalist nations in its grip. For more than half a century the battle of ideas will rage. But in the 1970s, with Keynesian theory at its height and communism fully entrenched, economic stagnation sets in on all sides.

The Crisis of Credit Visualized FLOW