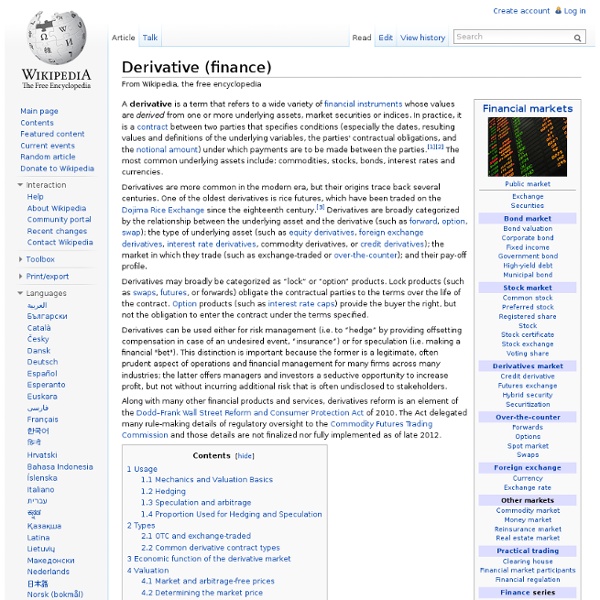 Many money managers use derivatives for a variety of purposes, such as hedging — by taking a position in a derivative, losses on portfolio holdings may be minimized or offset by profits on the derivative. Likewise, derivatives can be used to gain quicker and more efficient access to markets; for example, it may be easier and quicker to purchase an S & P 500 futures contract than to invest in the underlying securities.[3] Derivatives are a contract between two parties that specify conditions (especially the dates, resulting values and definitions of the underlying variables, the parties' contractual obligations, and the notional amount) under which payments are to be made between the parties.[4][5] The most common underlying assets include commodities, stocks, bonds, interest rates and currencies, but they can also be other derivatives, which adds another layer of complexity to proper valuation. Still, even these scaled down figures represent huge amounts of money.

Black–Scholes Robert C. Merton was the first to publish a paper expanding the mathematical understanding of the options pricing model, and coined the term "Black–Scholes options pricing model". Merton and Scholes received the 1997 Nobel Prize in Economics (The Sveriges Riksbank Prize in Economic Sciences in Memory of Alfred Nobel) for their work. Though ineligible for the prize because of his death in 1995, Black was mentioned as a contributor by the Swedish Academy.[4] The model's assumptions have been relaxed and generalized in a variety of directions, leading to a plethora of models which are currently used in derivative pricing and risk management. The Black-Scholes world[edit] The Black–Scholes model assumes that the market consists of at least one risky asset, usually called the stock, and one riskless asset, usually called the money market, cash, or bond. Now we make assumptions on the assets (which explain their names): Assumptions on the market: Notation[edit] Let , the strike price of the option.

Weather derivative Overview of uses[edit] Heating degree days are one of the most common types of weather derivative. Typical terms for an HDD contract could be: for the November to March period, for each day where the temperature rises above 18 degrees Celsius keep a cumulative count of the difference between 18 degrees and the average daily temperature. Depending upon whether the option is a put option or a call option, pay out a set amount per heating degree day that the actual count differs from the strike. History[edit] The first weather derivative deal was in July 1996 when Aquila Energy structured a dual-commodity hedge for Consolidated Edison Co.[1] The transaction involved ConEd's purchase of electric power from Aquila for the month of August. After that humble beginning, weather derivatives slowly began trading over-the-counter in 1997. Valuation[edit] Business pricing[edit] Historical pricing (Burn analysis)[edit] The historical payout of the derivative is computed to find the expectation.

Margin (finance) Margin buying refers to the buying of securities with cash borrowed from a broker, using other securities as collateral. This has the effect of magnifying any profit or loss made on the securities. The securities serve as collateral for the loan. The net value—the difference between the value of the securities and the loan—is initially equal to the amount of one's own cash used. This difference has to stay above a minimum margin requirement, the purpose of which is to protect the broker against a fall in the value of the securities to the point that the investor can no longer cover the loan. The variation margin or mark to market is not collateral, but a daily payment of profits and losses. The seller of an option has the obligation to deliver the underlying of the option if it is exercised. Additional margin is intended to cover a potential fall in the value of the position on the following trading day. Example 1 Example 2 Futures contracts on sweet crude oil closed the day at $65.

Getting To Know The "Greeks" An option's price can be influenced by a number of factors. These factors can either help or hurt traders, depending on the type of options positions they have established. To become a successful option trader, it is essential to understand what factors influence the price of an option, which requires learning about the so-called "Greeks" - a set of risk measures that indicate how exposed an option is to time-value decay, implied volatility and changes in the underlying price of the commodity. In this article, I we'll look at four "Greek" risk measures - delta, theta, vega and gamma - and explain their importance. But first, let's review some related option characteristics that will help you better understand the Greeks. SEE: Options Basics Tutorial Influences on an Option's Price Figure 1 lists the major influences on both a call and put option's price. Bear in mind that results will differ depending on whether you long or short an option. Three things to keep in mind with delta: 1. 1.

Nadex History[edit] "Hedgelets" come in two varieties: binary options and capped futures.[4] Binary options are bets on outcomes, "yes/no" contracts, that pay out a small dollar amount (e.g. $100) if final price of an instrument is above the strike price and nothing if below. For instance, HedgeStreet launched Germany 30 Binary Options in 2008. The Germany 30 contract is based on the DAX Equity Index Futures; if the estimate exceeds the strike price, the binary options pay out. A binary option is a contract with an all-or-nothing payout. As of mid-2006, the company had two major investment partners.[2] The Chicago Board Options Exchange purchased a minority stake in HedgeStreet in February 2006 and assists in marketing the company's "hedgelets". In 2007, UK based IG Group announced intent to acquire HedgeStreet[5][6] and later in the year completed the purchase of the company. Soon after the acquisition, IG Group renamed HedgeStreet to the North American Derivatives Exchange (Nadex).

Cascading failure An animation demonstrating how a single failure may result in other failures throughout a network. A cascading failure is a failure in a system of interconnected parts in which the failure of a part can trigger the failure of successive parts. Such a failure may happen in many types of systems, including power transmission, computer networking, finance and bridges. Cascading failures usually begin when one part of the system fails. When this happens, nearby nodes must then take up the slack for the failed component. This in turn overloads these nodes, causing them to fail as well, prompting additional nodes to fail one after another in what is also known as vicious circle. Cascading failure in power transmission[edit] Cascading failure is common in power grids when one of the elements fails (completely or partially) and shifts its load to nearby elements in the system. Monitoring the operation of a system, in real-time, and judicious disconnection of parts can help stop a cascade.

Greeks (finance) The Greeks are vital tools in risk management. Each Greek measures the sensitivity of the value of a portfolio to a small change in a given underlying parameter, so that component risks may be treated in isolation, and the portfolio rebalanced accordingly to achieve a desired exposure; see for example delta hedging. , measures the rate of change of option value with respect to changes in the underlying asset's price. of the option with respect to the underlying instrument's price For a vanilla option, delta will be a number between 0.0 and 1.0 for a long call (or a short put) and 0.0 and −1.0 for a long put (or a short call); depending on price, a call option behaves as if one owns 1 share of the underlying stock (if deep in the money), or owns nothing (if far out of the money), or something in between, and conversely for a put option. These numbers are commonly presented as a percentage of the total number of shares represented by the option contract(s). ). The symbol kappa, Lambda,

Iowa Electronic Markets Iowa Electronic Market for 2008 Democratic National Primary. The Obama spike in February is a result of Super Tuesday. The Iowa Electronic Markets (IEM) are a group of real-money prediction markets/futures markets operated by the University of Iowa Tippie College of Business. Unlike normal futures markets, the IEM is not-for-profit; the markets are run for educational and research purposes. The IEM allows traders to buy and sell contracts based on, among other things, political election results and economic indicators. The IEM has often been used to predict the results of political elections with a greater accuracy than traditional polls.[1][2][3][4] A precursor to the IEM was the Iowa Political Stock Market (IPSM), invented by George Neumann, and was developed by Robert E. How it works[edit] Here are examples of contracts that the IEM traded, beginning June 6, 2006, concerning the 2008 U.S. On the first trading day in January, 2007, the DEM08_WTA contract sold for 52.2 cents.

Systemic risk In finance, systemic risk is the risk of collapse of an entire financial system or entire market, as opposed to risk associated with any one individual entity, group or component of a system, that can be contained therein without harming the entire system.[1][2][3] It can be defined as "financial system instability, potentially catastrophic, caused or exacerbated by idiosyncratic events or conditions in financial intermediaries".[4] It refers to the risks imposed by interlinkages and interdependencies in a system or market, where the failure of a single entity or cluster of entities can cause a cascading failure, which could potentially bankrupt or bring down the entire system or market.[5] It is also sometimes erroneously referred to as "systematic risk". Explanation[edit] Systemic risk has been associated with a bank run which has a cascading effect on other banks which are owed money by the first bank in trouble, causing a cascading failure. Measurement of systemic risk[edit]