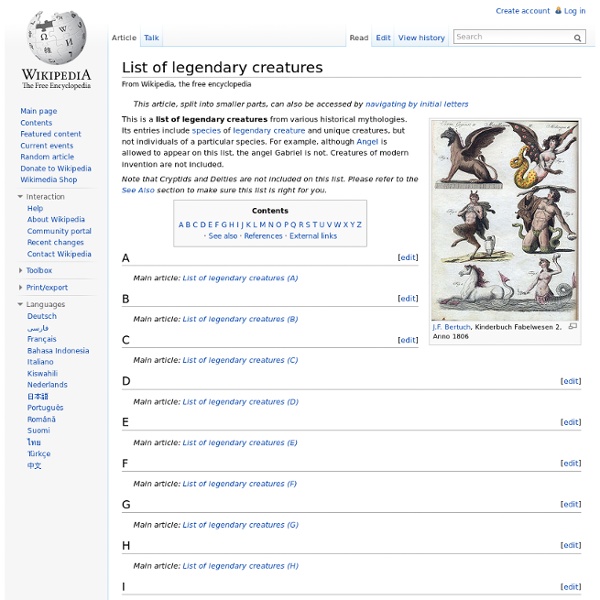 Strange Science: Mammals Perhaps as long as 5,000 years ago, a group of sailors found skulls belonging to a race of hideous giants whom the ancient Greeks named cyclops. Dwelling in their mythical land, entrusting the fate of their crops to their evil gods and devouring any humans they could find, these creatures terrified generations of Europeans. Today, relatives of these monsters can still be found — roaming the African savannas or the Indian jungles, or even eating peanuts from the hands of small children in city zoos. In fact, the ancient Greek sailors found elephant skulls. What they mistook for single eye sockets were the nasal openings for the elephants' trunks. Over the centuries, our understanding of mammals, both living and extinct, has improved considerably.

Vampire Vampires are mythical beings who subsist by feeding on the life essence (generally in the form of blood) of living creatures In folkloric tales, undead vampires often visited loved ones and caused mischief or deaths in the neighbourhoods they inhabited when they were alive. They wore shrouds and were often described as bloated and of ruddy or dark countenance, markedly different from today's gaunt, pale vampire which dates from the early 1800s. Although vampiric entities have been recorded in most cultures, the term vampire was not popularised until the early 18th century, after an influx of vampire superstition into Western Europe from areas where vampire legends were frequent, such as the Balkans and Eastern Europe,[1] although local variants were also known by different names, such as vrykolakas in Greece and strigoi in Romania. Etymology Folk beliefs

List of Greek mythological creatures The following is a list of creatures from Greek mythology. The list does not include gods and other divine and semi-divine figures (see List of Greek mythological figures). Mythological monsters[edit] Greek myth includes many monstrous beings: Mythical animals[edit] Petra: Lost City of Stone Deep within the deserts of Jordan lies the ancient city of Petra. Through a narrow gorge it emerges into view, revealing awe-inspiring monuments cut into the surrounding cliffs. What is this astonishing city? Mysterious Myths About Mermaids There have been recorded sightings from fishermen, women, men of reputation within the community of mermaids and mermen. Some are quite convincing while others are a little vague. Nonetheless they make a good reading.

Theoi: Legendary Greek Creatures See also CATEGORIES IN THE BESTIARY (an illustrated index). Greek myth and legend is filled with a wide variety of monsters and creatures ranging from Dragons, Giants, Demons and Ghosts, to multiformed creatures such as the Sphinx, Minotaur, Centaurs, Manticores and Griffins.There were also many fabulous animals such as the Nemean Lion, golden-fleeced Ram and winged horse Pegasus, not to mention the creatures of legend such as the Phoenix, Unicorns (Monocerata) . Even amongst the tribes of man, myth spoke of strange peoples inhabiting the far reaches of the earth such as the hopping Umbrella-Foots, the one-eyed Arimaspians, the Dog-Headed men, and the puny Pygmies. AMPHISBAENAE see Beasts, African AUTOMOTONS (Automotones) Creatures crafted out of metal and endowed with life by the smith-god Hephaestus. BULLS, BRONZE (Tauroi Khalkeoi) Four fire-breathing, bronze bulls which Hephaestus crafted for King Aeetes of Colchis.

Ancient skeletons discovered in Georgia threaten to overturn the theory of human evolution By David Derbyshire Updated: 12:26 GMT, 9 September 2009 For generations, scientists have believed Africa was the cradle of mankind. Now a stunning archaeological discovery suggests our primitive ancestors left Africa to explore the world around 800,000 years earlier than was previously thought before returning to their home continent. It was there - hundreds of thousands of years later - that they evolved into modern humans and embarked on a second mass migration, researchers say. Mermaid Mythology The roots of mermaid mythology are more varied than one would expect. In modern myth we tend to see mermaids in a singular way - kind and benevolent to humans who keep to their own kind in the deep waters of the ocean. Not all stories go this way, though, and in most cases the most ancient tales of mermaid mythology follow quite a different view. The earliest known mermaid legends come from Syria around 1000 B.C. where the Syrian goddess Atargatis dove into a lake to take the form of a fish, but the powers there would not allow her give up her great beauty, so only her bottom half became a fish and she kept her top half in human form.