Hunting Big Game: Why People Kill Animals for Fun. Foxes Active in Late Winter. Sportfishingmag. Cascadia Wildlands » Time to Get the Lead Out. Over the past few years I have had a number of conversations with hunters, scientists, veterinarians and wildlife rehabilitators about lead bullets, fragmentation and how fragments are entering the food chains of raptors and other scavengers (see here). 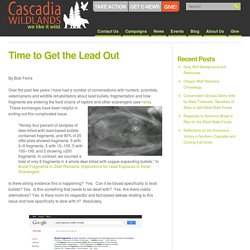 These exchanges have been helpful in sorting out this complicated issue. Is there strong evidence this is happening? Yes. National Wildlife Health Center - Lead Poisoning. Mallard on right with characteristic drooping wing, a symptom of lead poisoning Photo by James Runningen Twenty-four years after nontoxic shot requirements were established for hunting waterfowl, attention has shifted to lead poisoning in other species. 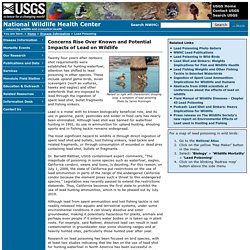 These include upland game birds, avian scavengers (such as vultures, hawks and eagles) and other waterbirds that are exposed to lead through the ingestion of spent lead shot, bullet fragments and fishing sinkers. Lead is a metal with no known biologically beneficial role, and its use in gasoline, paint, pesticides and solder in food cans has nearly been eliminated. Although lead shot was banned for waterfowl hunting in 1991, its use in ammunition for upland hunting, shooting sports and in fishing tackle remains widespread.

Dr. Some states have limited the use of lead shot in upland areas, others are considering such actions, and several states have restricted the use of lead fishing sinkers. News from Staying Connected. The stories assembled for this newsletter capture so well SCI's multi-faceted approach to sustaining connectivity: in Quebec, new funding will help launch efforts to raise community awareness and influence land use planning; in Vermont, SCI partners are expanding a program to enhance stewardship of private forest lands; in Maine, collaboration among state agencies is helping to make roads safer for moose and people. 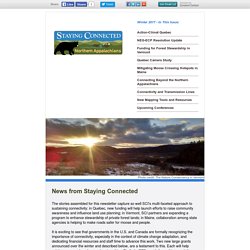 It is exciting to see that governments in the U.S. and Canada are formally recognizing the importance of connectivity, especially in the context of climate change adaptation, and dedicating financial resources and staff time to advance this work. Two new large grants announced over the winter and described below, are a testament to this.

Each will help catalyze new work and expand partnerships. Thanks to all of our partners and supporters for your efforts to keep the Northern Appalachians connected. Yes, the Endangered Species Act should be reformed. A gray wolf, which has federal protections from the U.S. 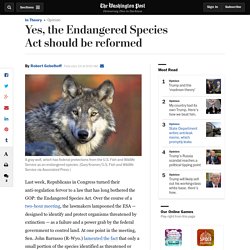 Fish and Wildlife Service as an endangered species. (Gary Kramer/U.S. Fish and Wildlife Service via Associated Press ) Last week, Republicans in Congress turned their anti-regulation fervor to a law that has long bothered the GOP: the Endangered Species Act. Wolverine Day In The Beartooths: A Happy Old Man Finds High Fast Corn And Discovers Tracks Of The Legendary 'Glutton' - The Bullseye. A LITTLE OVER TEN YEARS AGO, AFTER RETIRING FROM THE FOREST SERVICE in Logan, Utah, my wife Catherine and I moved to Paradise Valley, Montana. 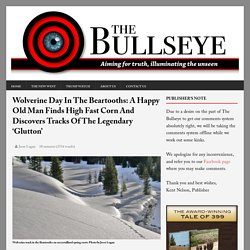 This little-noticed court settlement will probably save millions of animals. More than 380 gray wolves were killed by Wildlife Services in 2015, pleasing Western ranchers while angering conservationists. 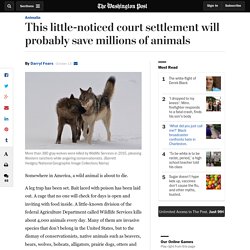 (Barrett Hedges/National Geographic Image Collection/Alamy) Somewhere in America, a wild animal is about to die. A leg trap has been set. Bait laced with poison has been laid out. A cage that no one will check for days is open and inviting with food inside. Last year, 3.2 million animals were killed. Donkey Hill - Service Dog Project. Connecting Landscapes: A Practitioner's Resource for Assessing and Planning for Habitat Connectivity // LandScope America. Connectivity for wildlife and biodiversity is important for many species’ viability. 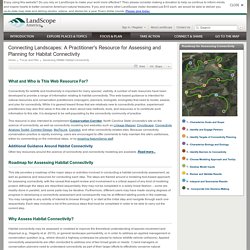 A number of web resources have been developed to provide a range of information relating to habitat connectivity. This web-based guidance is intended for natural resources and conservation practitioners (managers, planners, biologists, ecologists) that need to model, assess, and plan for connectivity. While it is geared toward those that are relatively new to connectivity practice, experienced practitioners may also find value in this site to learn about new methods, tools, and resources or to contribute such information to this site; it is designed to be self-populating by the connectivity community of practice.

Additional Guidance Around Habitat Connectivity Other key resources around the science of connectivity and connectivity modeling are available. Photo credits: Larry Lamsa, John Picken, Larry Lamsa. Here's How to Design a Wildlife Crossing That Wildlife Will Actually Use. Roll down your windows while cruising down the 101 through Agoura today, and you'll see a few one or two story buildings, brown rolling hills, and depending on the season, some green trees. 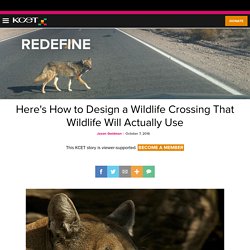 But if everything goes according to plan, then by 2021 you'll be able to see a massive bridge arching over the highway, connecting restored habitat on either side of one of the nation's busiest roadways. The wildlife crossing at Liberty Canyon, when completed, promises to be the world's largest urban wildlife crossing. Fur-Bearings. Bighorn. Could Mountain Lions Help Solve Connecticut’s Deer Problem? For humans, deer are actually the most dangerous wild mammal in North America. 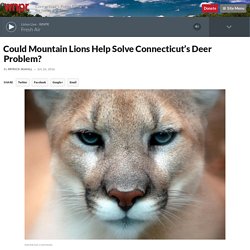 A Natural Cure for Lyme Disease. Don’t Give Away Our Wildlife Refuges. Breaking news: Obama administration grounds aerial hunting, other inhumane predator-killing practices on refuges in Alaska. Sharp Decline in Vermont Moose Herd Raises Questions About Hunting. Ice Age Death Trap Yields an Unexpected Carnivore. If you're lucky enough to hear a long, sonorous howl rolling through the Wyoming forests and grasslands, you're listening to the voice of a gray wolf. 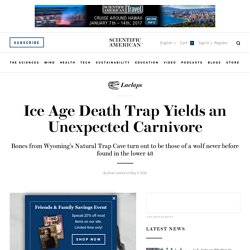 They're the only wolves padding around the Cowboy State today. But during the last Ice Age, a different sort of wolf called this range home. Trophy Hunting Fees Do Little to Help Threatened Species, Report Says. WASHINGTON — Advocates of trophy hunting, and even the United States government, have long justified the killing of protected wildlife in Africa by saying that taxes and fees from the hunts help pay for larger conservation efforts. But a new report by the Democratic staff of the House Natural Resources Committee challenges those claims, finding little evidence that the money is being used to help threatened species, mostly because of rampant corruption in some countries and poorly managed wildlife programs. It concludes that trophy hunting may be contributing to the extinction of certain animals.

It has been almost a year since an American hunter killed a beloved lion named Cecil in Zimbabwe, setting off an international debate over sport hunting and widespread anger on the internet. Climate Change Is Drawing Alaska’s Moose Onto the Tundra. As longer and warmer summers increase the abundance and size of shrubs in far northern Alaska, moose have expanded beyond the boreal forest limits and onto the tundra, according to a new study. University of Alaska ecologist Ken Tape, the lead author of the study, believes that the expansion of moose onto the tundra is one of the first definitive examples of a climate change–driven shift in a large land mammal’s distribution. “We know these changes are occurring, but here’s an example where the wildlife is responding to these changes in real time, over about a century and a half,” Tape said, which by scientific standards is shorter than the blink of an eye. Scientists have documented other wildlife species on the move because of climate change, such as southerly bird species shifting northward or equatorial fish leaving warming, low-oxygen waters.

Camp Creek Elk Feedground 2014: A Valley of Death. Infographic: Hey, Wildlife Services — what did you kill? Sign up now to receive our email newsletter! • The best collection of Western environmental news. I Am Not A Trophy Sticker – The Echo Syndicate. Killing to Conserve. Critics see overkill at Wildlife Services - The New West - JHN&G Mobile. Picking up the dead left by wasting disease - The New West - JHN&G Mobile. The Need to Reform Wildlife Management. Quest to save Minnesota moose has breakthroughs, hard choices. Cougar Lessons in Coexistence

Warning from the Birding Community to the Terrorists in Oregon: We're Watching You. The Myth of Hunting Conservation. Endangered and Threatened Wildlife and Plants; Listing Two Lion Subspecies. Lions, trophy hunting and the US government - the 27 facts you need to know. Study Erases Misconceptions About Endangered Species Act, Raises Questions About Enforcement. » OUR WILDLIFE TRUST.

A Personal Exploration of the Ethics of Wildlife Photography in Yellowstone. Connecticut Wildlife Action Plan. The Eastern Wildway Essential 16. Rewilding the East: Exploring Eastern Wildways from the Everglades to the Boreal Forest · College of the Atlantic. Steve Hall: Be Grateful You’re Not A Moose - - The Adirondack Almanack. How much is nature worth? More than you can imagine. Glogin?mobile=1&URI= Lodgetrailmedia.wordpress. Citizens United: The Cash Cow That's Killing Endangered Species  Lion-killing dentist Walter Palmer just like others with too much wealth and not enough self-worth. Yes, Animals Think And Feel. Here’s How We Know. Congressional Sportsmen's Foundation. Short-tailed Weasel and Long-tailed Weasel. Smith Molde Wildlife Conservation Management Funding in the US Oct14 Rev F1. House Bill to Fund Interior Department Would Strip Protections From Gray Wolves. Ecolarge 2013 200m question.

America’s billionaires among welfare ranchers. Four ways Interior Secretary Jewell can salvage her legacy. Parks and Wreck: The Feds Need $11.5 Billion to Fix Our Public Lands. Top Predators May Be the Most Important Animals on Earth. How to Live Responsibly Alongside Our Wild Neighbors. Call to arms: Hunters dwindle as animal numbers explode. Far traveler 20081. Free Milkweed Seeds & contributions for Live Monarch Foundation. A Brutal Hunt: How Wildlife Advocates Are Fighting to Stop Coyote Killing Contests.