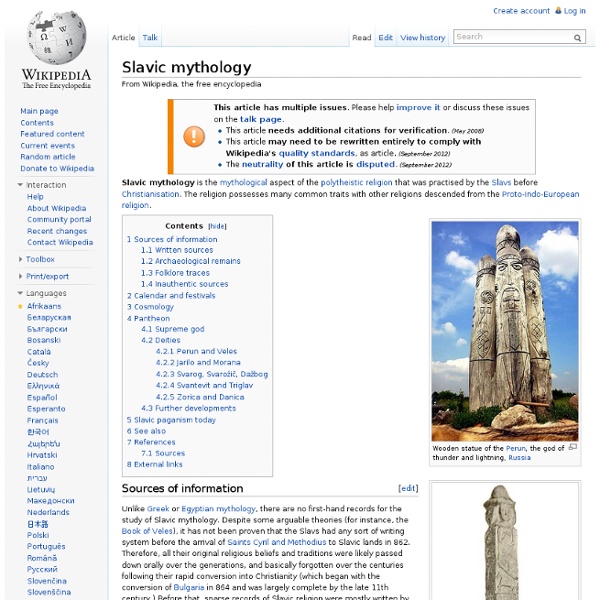 Many generations of Slavic artists were inspired by their national folklore: Ilya Yefimovich Repin, Sadko in the Underwater Kingdom (1876) Slavic mythology is the mythological aspect of the polytheistic religion that was practised by the Slavs before Christianisation. The religion possesses many common traits with other religions descended from the Proto-Indo-European religion. Old Slavic religion evolved over more than a thousand years and some parts of it were from neolithic or possibly even mesolithic times. Modern wooden statue of Perun, the god of thunder and lightning, Ruthenia Sources of information[edit] Unlike Greek, Indian or Egyptian mythology, there are no first-hand records for the study of Slavic mythology. Written sources[edit] The most numerous and richest written records are of West Slavic paganism, particularly of Wendish and Polabian tribes, who were forcibly made Christian only at the end of the 12th century. Artistic representation of Saxo Grammaticus Related:  Learning Sites & Help For Students

Sexology Sexology is the interdisciplinary study of human sexuality, including human sexual interests, behaviors and function.[1] The term sexology does not generally refer to the non-scientific study of sexuality, such as political science or social criticism.[2][3] In modern sexology, researchers apply tools from several academic fields, such as biology, medicine, psychology, epidemiology, sociology and criminology. Sexologists study sexual development (puberty), sexual orientation, sexual relationships and sexual activity, as well as document the sexualities of special groups; for example, child sexuality, adolescent sexuality, sexuality among the elderly and the disabled. The sexological study of sexual dysfunctions and disorders, including erectile dysfunction, anorgasmia, and pedophilia, are also common. History[edit] Sexology as it exists today, as a specific research-based scientific field, is relatively new. Early[edit] Sexology as an academic discipline[edit] Postwar expansion[edit]

Clouded leopard declared extinct in Taiwan Ministry of Foreign Affairs, Republic of China (Taiwan) A Formosan cloud leopard, now extinct in Taiwan. By Douglas Main, OurAmazingPlanet The Formosan clouded leopard, a clouded-leopard subspecies native to Taiwan, is now extinct, according to a team of zoologists. "There is little chance that the clouded leopard still exists in Taiwan," zoologist Chiang Po-jen told Taiwan's Central News Agency (CNA). "There may be a few of them, but we do not think they exist in any significant numbers." Zoologists from Taiwan and the United States have looked for the animal on and off since 2001, to no avail. Now, the only one left in the country is a stuffed specimen at the National Taiwan Museum, zoologist Liu Jian-nan told CNA. The range of clouded leopards (Neofelis nebulosa) spans from the hills of the Himalayas to Southeast Asia to China.

Exception paradox In the exception paradox, the statement "every rule has an exception" leads to a contradiction. The argument[edit] Every rule has an exception."Every rule has an exception." is a rule.There is a rule R without exception. Since 3. is the negation of 1., there is a contradiction. From the logical point of view, this can be taken as a proof that the sentence "every rule has an exception" is false - a simple example of a proof technique known as reductio ad absurdum. Variations on the paradox[edit] If everything is possible, then it is possible for anything to be impossible.The only rule is that there are no rules.The only thing certain is that there is nothing certain. A moment of silence for the Western Black Rhino Officially extinct Another beautiful species that we won't see again. The western black rhino, which is a sub-species of black rhino, was was once widespread in the savanna of sub-Saharan Africa, but no more. Wikimedia/Public Domain The IUCN warns that other rhinos could follow saying Africa's northern white rhino is "teetering on the brink of extinction" while Asia's Javan rhino is "making its last stand" due to continued poaching and lack of conservation." Conservation efforts certainly are not futile! Here are some black rhinos (though obviously not western black rhinos...) filmed by the BBC: Via CNN See also: Aw, cute!

A Study of Fairy Tales: Chapter I. The Worth of Fairy Tales Sacred Texts Miscellaneous Index Previous Next In olde dayes of the kyng Arthour, Of which that Britouns speken gret honour, Al was this lond fulfilled of fayrie; The elf-queen, with hir joly compaignye, Daunced ful oft in many a grene mede. ONLY a few years ago, in the gardens of the Tuileries, in Paris, a statue was erected in memory of Charles Perrault, to be placed there among the sculptures of the never-to-be-forgotten fairy tales he had created,--Red Riding Hood, Sleeping Beauty, Puss-in-Boots, Hop-o'-my-Thumb, Bluebeard, and the rest,--so that the children who roamed the gardens, and in their play gathered about the statues of their beloved fairy friends, might have with them also a reminder of the giver of all this joy, their friend Perrault. Such is the tribute to fairy tales rendered by two great nations who have recognized fairy tales as the joyous right of children. Fairy tales bring joy into child life. Fairy tales satisfy the play spirit of childhood. Next: Chapter II.

Wonderful Google Tutorials and Lessons on Web Safety and Digital Citizenship ThinkB4U is an online project created out of a partnership between Google Inc. and expert safety partners Common Sense Media, ConnectSafely, and the National Consumers League. It's main objective is to educate Internet users ( kids, parents, adults, teachers ) about important topics such as the protection of one's online identity, web safety, safe use of cellphones, digital citizenship and critical thinking skills. This site, designed by Fuel Industries, includes three main components that are meant to be explored together. VIDEOS:Each location -- Home, School, Mall -- includes several video shorts about a modern family's experience online. INTERACTIVE OBJECTS:As you view each video, you can collect interactive objects! MESSAGES:When you scroll down the site, you will find complementary messages targeted for each audience -- Students, Parents, Educators. Make sure to check out the resources as linked in the educators' and parents' sections of the site!

SparkNotes: Today's Most Popular Study Guides How to use a semicolon Pearltrees for teachers Year 2012 last post is a guest post from Finnish teacher Tommi Viljakainen. He is a teacher in Elimäki lower and upper secondary school. He teaches English, French and P.E. 10 tips for teachers: 1. The new social media tools make it possible for us to take the learning to the next level. Links:The program:Pear app (iPad, iPhone) Me and Pearltrees:My blog writings (in Finnish) Articles about Pearltrees:Pearltrees makes Web curation a joy with its 'magical' new iPad Web curation service Pearltrees launches a premium offering for private content s RegularGeek Main Page - Astrowiki-en Flashcards: The world's largest library of printable flash cards

ELI Resources 7 Things You Should Know About The 2016 Key Issues in Teaching and Learning February 11, 2016 Since 2011, ELI’s Key Issues survey has been a way for the higher education teaching and learning community to discover the common ground that cuts across differences such as Carnegie Classific… 2016 Horizon Report February 4, 2016 Produced by ELI and NMC each year, the Horizon Report describes six areas of emerging technology that will have significant impact on higher education and creative expression over the next one to… 7 Things You Should Read About Data Visualization for Instruction January 14, 2016 Developments in the tools for data visualization and increases in the types and amount of data available for visualizations offer new opportunities in pedagogy. 7 Things You Should Know About the Evolution of the Transcript January 11, 2016 Efforts are under way to capture a broader range of learning experiences and create frameworks to curate them, providing a more holistic view of student learning.