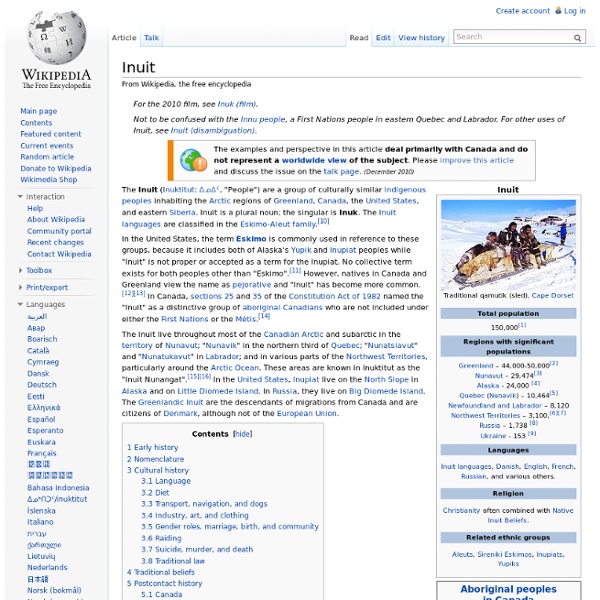 Inuit (pronounced /ˈɪnuːɪt/ or /ˈɪnjuːɪt/; Inuktitut: ᐃᓄᐃᑦ, "the people"[5]) are a group of culturally similar indigenous peoples inhabiting the Arctic regions of Greenland, Canada, and the United States.[6] Inuit is a plural noun; the singular is Inuk.[5] The Inuit languages are classified in the Eskimo-Aleut family.[7] The Inuit live throughout most of the Canadian Arctic and subarctic in the territory of Nunavut; "Nunavik" in the northern third of Quebec; "Nunatsiavut" and "NunatuKavut" in Labrador; and in various parts of the Northwest Territories, particularly around the Arctic Ocean. These areas are known in Inuktitut as the "Inuit Nunangat".[12][13] In the United States, Inupiat live on the North Slope in Alaska and on Little Diomede Island. Early history[edit] For pre-history, see: Paleo-Indians and Archaic periods (Canada) But, in the mid-1950s, researcher Henry B. Their first European contact was with the Vikings who settled in Greenland and explored the eastern Canadian coast. Related:  How do inuits survive in the harsh weathers nature throws at the

Inuit Food Click on the names below to see their research... Austin, Jeff, Brett B., Mallory, Meagan, Chance In the past, the Inuit ate caribou, whale and seal meat. They had to hunt for their food. To hunt an animal underwater in the Arctic during the winter months, the hunter need to cut a hole in the ice and point his spear in the water and wait. Austin In the past, the Inuit hunted, caught or gathered all their food. Jeff The Inuit ate fish, caribou, whale and sometimes fox. Brett B. Now Inuit have their own stoves and use many of the same utensils as we do. Mallory In the past, if they wanted to cook the meat, the hunter had a tool that included a bow-drill and piece of driftwood. Meagan [top] Some of the tools the Inuit used in the past were ulus, spears and axes. Chance

Inuit Culture, Traditions, and History This picture shows several Inuit constructing an igloo with blocks of snow. Click on image for full size Library of Congress Prints and Photographs, Photograph by Frank E. Kleinschmidt Traditional Inuit way of life was influenced by the harsh climate and stark landscapes of the Arctic tundra – from beliefs inspired by stories of the aurora to practicalities like homes made of snow. Inuit invented tools, gear, and methods to help them survive in this environment. Geography Inuit communities are found in the Arctic, in the Northwest Territories, Labrador and Quebec in Canada, above tree line in Alaska (where people are called the Inupiat and Yupik), and in Russia (where people are called the Yupik people). Inuit Homes In the tundra, where Inuit communities are found, there are not many building materials. Getting Around To travel from one place to another, Inuit used sleds made of animal bones and skins pulled over the snow and ice by dogs. But that changed. Arctic Tundra The Cryosphere

The Inuits of the Arctic In the Arctic, under harsh cold and bare conditions, the Inuit people reside(d). To survive the -30 degrees C. the Inuit have adjusted their life in the way of clothing, shelter, etc. The native animals of the land and water are not just for food, but are used for clothing to keep. The caribou hide is the main material used, as the hollow hair traps air, which makes an excellent insulator. Layers of parkas (hood also lined with fur and covers most of face when drawn, so wearers breath helps to insulate), winter pants, and mittens helped keep the Inuit alive in the winter. Seal skin boots were used to produce "double boots." The most suitable shelter that is both dependable and convenient for the Inuit are igloos (iglus). The caribou move from one place to another on certain routes every year. The Inuit aquire many marquees as their culture and way of life is so different than other groups.

Inuit Indians Inuit The Inuit are a group of culturally similar indigenous peoples inhabiting the Arctic regions of Canada (Northwest Territories, Nunatsiavut, Nunavik, Nunavut, Nunatukavut), Denmark (Greenland), Russia (Siberia) and the United States (Alaska). Inuit means "the people" in the Inuktitut language. An Inuk is singular for Inuit person, whereas Inuit is plural. The Inuit language is grouped under Eskimo-Aleut languages. The Inuit live throughout most of the Canadian Arctic and subarctic: in the territory of Nunavut ("our land"); the northern third of Quebec, in an area called Nunavik ("place to live"); the coastal region of Labrador, in areas called Nunatsiavut ("our beautiful land") and Nunatukavut ("Our Ancient Land"); in various parts of the Northwest Territories, mainly on the coast of the Arctic Ocean and formerly in the Yukon. In the U.S., Alaskan Inupiat live on the North Slope of Alaska and Siberian Coast, Little Diomede Island. Early History Languages Writing Society, Marriage Diet

Arctic Location of the Arctic Artificially coloured topographical map of the Arctic region MODIS image of the Arctic Socially and politically, the Arctic region includes the northern territories of the eight Arctic states, although by natural science definitions much of this territory is considered subarctic. The Arctic region is a unique area among Earth's ecosystems. The cultures in the region and the Arctic indigenous peoples have adapted to its cold and extreme conditions. Etymology[edit] The word Arctic comes from the Greek ἀρκτικός (arktikos), "near the Bear, northern"[6] and that from the word ἄρκτος (arktos), meaning bear.[7] The name refers either to the constellation Ursa Major, the "Great Bear", which is prominent in the northern portion of the celestial sphere, or to the constellation Ursa Minor, the "Little Bear", which contains Polaris, the Pole Star, also known as the North Star.[8] Climate[edit] The Arctic's climate is characterized by cold winters and cool summers. Biota[edit]

Arctic Animal Printouts Advertisement. EnchantedLearning.com is a user-supported site. As a bonus, site members have access to a banner-ad-free version of the site, with print-friendly pages.Click here to learn more. (Already a member? Click here.) Arctic Animals The Arctic: The Arctic is a very cold, windy, and often snowy biome located around the North Pole. There is also a lot of land within the Arctic Circle (northern parts of Asia, Europe, and North America). Arctic Land Zones: The most extreme Arctic land (the closest to the North Pole) is called the High Arctic Zone; this polar desert supports very little animal or plant life (less than 5 percent of the land area is covered with vegetation) due to a very short, dry growing season, dry air, permafrost, poor soils, and a lack of pollinating insects. Arctic Animals: Animals that live in the Arctic (either full time or seasonally) are adapted to extreme conditions. Arctic Animal Printouts

Arctic Marine Mammals On Thin Ice The loss of sea ice due to climate change could spell disaster for polar bears and other Arctic marine mammals. Sea ice is the common habitat feature uniting these unique and diverse Arctic inhabitants. Sea ice serves as a platform for resting and reproduction, influences the distribution of food sources, and provides a refuge from predators. The Arctic undergoes dramatic seasonal transformation. "However, the rate and scale of current climate change are expected to distinguish current circumstances from those of the past several millennia. The April Special Issue of Ecological Applications examines such potential effects, puts them in historical context, and describes possible conservation measures to mitigate them. Climate change will pose a variety of threats to marine mammals. The effects of climate change will be compounded by a host of secondary factors. Lead authors of the collection of papers in the Special Supplement to Ecological Applications are:

Survival in the Arctic Human beings have lived in the Arctic and Subarctic for thousands of years. Their survival has been possible because there exists among them a profound understanding of the nuances within this extreme environment. Survival is also contingent on the relationship which exists between the human being and the animals, which provide major sources of food and clothing. Warmth for Hunters Caribou-skin or polar bear-skin clothing can provide warmth for a hunter who lies on the ice for hours waiting for his target to appear. Housing Finally, the most famous traditional example of housing is the snow house or "igluviga." Like many native cultures, the traditional northern peoples of the Arctic have survived in the most challenging of circumstances because of their deep understanding of the surrounding environment. Additional Resources: The Simcoe County Board of Education is constantly updating their home page available on the World Wide Web.

GeoScenic Home Page | British Geological Survey Welcome to GeoScenic, where you can view and download images from the vast collections of geological photographs in BGS. Download of 1000 x 1000 pixel images is free for all non-commercial use - all we ask in return is for you to acknowledge BGS when using our images. Click our Terms and Conditions link below for information on acknowledgement text, and to find out about using our images commercially. All images in this site can be viewed without registering. However, by registering, you can save images to your lightbox for future sessions and download images at your leisure. You are not currently logged in. Authors in all Elsevier journals can now include GeoScenic image identifiers from BGS (www.bgs.ac.uk) into their article on ScienceDirect. For more information on BGS GeoScenic identifiers and database linking with Elsevier please see Visit the new BGS Geoheritage image blog! View spatially referenced images on your mobile. J.D.

Unlocking the Archives Antarctica is the coldest continent - Russia's Vostok Station recorded the world's coldest temperature of -89°C in 1983. It is also the driest continent with an average annual snowfall of 125mm. It has no permanent inhabitants and it is the most isolated continent. It is of immense value to scientists for the study of climate change as it has an important effect on the world's climate and ocean systems. It was the geographers of ancient Greece who first suggested that there was a large landmass around the South Pole. In 1895, the International Geographical Congress claimed 'the exploration of the Antarctic region is the greatest piece of geographical exploration still to be undertaken' and the 'heroic' age of Antarctic discovery began. Discover the story of the race to the Pole. What were their views of Antarctica? What is the climate and landscape like? How has Antarctica been used for science? How has Antarctica been used for commercial profit?

Virtual Tour: Antarctica Before you start this tour, here are some things you should know: There is a way to get back to this page and a link to a site map of the virtual tour at the bottom of every page on this virtual tour. The tiny ("thumbnail") images of people and places found throughout this tour are meant to just give you the idea of the image; to retrieve the full-sized image, simply click on the thumbnail. Regardless of where you live or which country you work for, to get to the South Pole, you almost certainly go through New Zealand and then land at McMurdo on the coast of Antarctica on your way to the center of the continent and the bottom of the Earth: the South Pole. This image came from The Earth and Moon Viewer, specifically a request like this. Want to learn more about the territorial claims on Antarctica? Go on to New Zealand, McMurdo, and South Pole. All photos on this tour are from CARA unless otherwise specified. For more information

Related:
Related:  How do inuits survive in the harsh weathers nature throws at the