Watch the man who creates No Man’s Sky’s creature sounds at work - Kill Screen. No Man’s Sky feels like the game that keeps on giving. 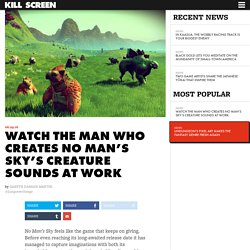 Before even reaching its long-awaited release date it has managed to capture imaginations with both its improbable construction and the mind-bending problem solving of its creators at Hello Games. Perhaps it has been because its talented team, in particular art director Grant Duncan and programmer Innes McKendrick, as well as figurehead Sean Murray, have been so eager to share their solutions with the world in a series of talks that all deal with the same issue: how do you maintain artistic control in a near-infinite game world? First there was Duncan, who at GDC 2015 told the world how he used an army of robot drones to capture animated GIFs of the quintillions of planets in the game so he could canvas their aesthetics.

Then came a talk from McKendrick at Nucl.ai where he explained the mathematical formula that allowed Hello Games to create worlds that had undergone hundreds of years of erosion without ever modelling that process. A Modular Creature Design System. Posted by Varun Nair on Thursday, February 27, 2014 · 7 Comments I’ve been working on a game project on and off over the past year and a part of the design is of relevance to this month’s theme — animals. 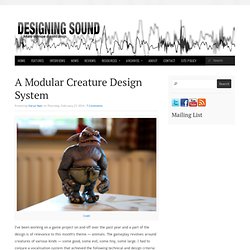 The gameplay revolves around creatures of various kinds — some good, some evil, some tiny, some large. I had to conjure a vocalisation system that achieved the following technical and design criteria: Actions by the user would directly affect the state (and sound) of the creatureThe player must be able to perceive some sort of emotive response from the creatureA modular system which would work for various creature types and charactersWith mobile devices being the primary target, it had to be simple, effective and portableLow CPU and memory usage, which translates to maximising the design capabilities of the system with little DSP and few samples Design Considerations: ‘Emotion’ is tough to parametrise or quantify. 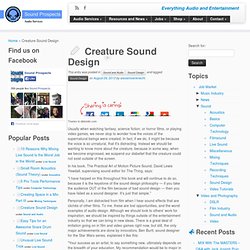 In fact, if we do, it might be because the voice is so unnatural, that it's distracting. Instead we should be wanting to know more about the creature, because in some way, when we become engrossed, we suspend our disbelief that the creature could not exist outside of the screen. In his book, The Practical Art of Motion Picture Sound, David Lewis Yewdall, supervising sound editor for The Thing, says: "I have harped on this throughout this book and will continue to do so, because it is the keystone of the sound design philosophy — if you take the audience OUT of the film because of bad sound design — then you have failed as a sound designer.

Personally, I am distracted from film when I hear sound effects that are clichés of other films. Alchemy Picture a whale coming up for air. Animal Communication 1. BlizzCast 17: Diablo III Quest, Item & Sound Design. Nightmares and Soundscapes: Implementation of Acoustic Ecology Related Sound Design Techniques to Better Terrify your Players. Guest Contribution by Dr Tom Garner This article addresses contemporary concepts regarding how we attune to sound within a fear context and discusses the potential impact of these ideas upon sound design, specifically with regards to evoking disorientation in survival horror computer games. 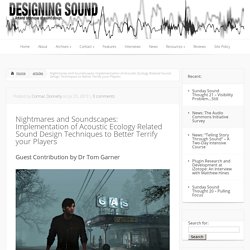 Relevant theory is distilled to consider an ecological perspective of sound experience within a survival horror game context. We then discuss how this approach will likely impact upon future practice as we, as designers, strive to develop sound production and implementation techniques that have increasingly greater potential to unnerve, panic and otherwise terrify even the most hardcore of gamers. Generating Fear From Sound Whilst the affective potential (the ability to evoke an emotional response) of music is a well-established field of research, the equivalent examination into non-musical/non-speech sound (sound effects, ambient sound, etc.) has undergone relatively less investigation. The Terrifying Sound Design of Dead Space 3: Kill Screen Episode 5.