Locust. Locust. 4 Amazing Facts About Locusts. 1.These insects are famous for their catastrophic invasions, mentioned even in the Bible as the eighth plague. 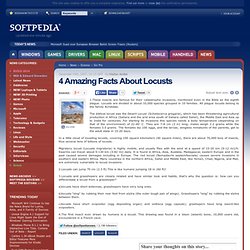 Locusts are divided in about 10,000 species grouped in 10 families. All plague locusts belong to the family Acrididae. The biblical locust was the Desert Locust (Schistocerca gregaria), which has been threatening agricultural production in Africa (Sahara and the arid area south of Sahara called Sahel), the Middle East and Asia up to India for centuries. For starting its invasions this species needs a body temperature (depending on that of the environment) of 22-40' C. Locust fact. Locusts, Locust Pictures, Locust Facts. A plague of locusts is a devastating natural disaster. 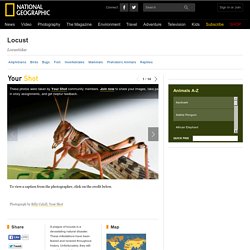 These infestations have been feared and revered throughout history. Unfortunately, they still wreak havoc today. Locusts are related to grasshoppers and the two insects look similar. However, locust behavior can be something else entirely. Locusts are sometimes solitary insects with lifestyles much like grasshoppers. Locust swarms devastate crops and cause major agricultural damage and attendant human misery—famine and starvation. 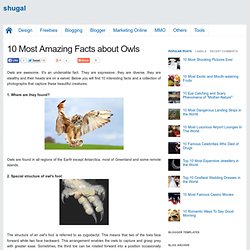 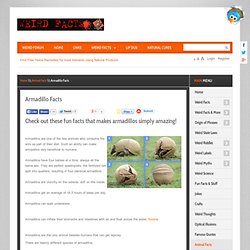 Armadillos are one of the few animals who consume fire ants as part of their diet. Such an ability can make armadillos very beneficial to humans. Armadillos have four babies at a time, always all the same sex. They are perfect quadruplets, the fertilized cell split into quarters, resulting in four identical armadillos.

Armadillos are crunchy on the outside, soft on the inside. Facts about ARMADILLOS. Ten Interesting Armadillo Facts For Your Reading Pleasure. Found in the Western United States, Mexico, and South America, armadillos (also known as "little armored one") - although strange looking - are truly fascinating creatures. 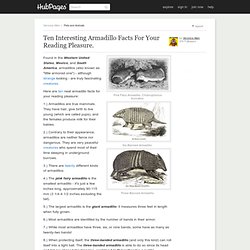 Here are ten neat armadillo facts for your reading pleasure: 1.) Armadillos are true mammals. They have hair; give birth to live young (which are called pups); and the females produce milk for their babies. 2.) 3.) Armadillo. Nine-banded armadillo skeleton About 10 extant genera and 20 extant species of armadillo have been described, some of which are distinguished by the number of bands on their armor. 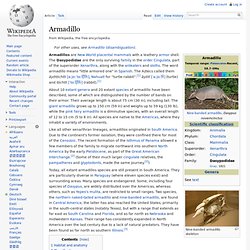 Their average length is about 75 cm (30 in), including tail. The giant armadillo grows up to 150 cm (59 in) and weighs up to 59 kg (130 lb), while the pink fairy armadillo is a diminutive species, with an overall length of 12 to 15 cm (5 to 6 in). Fun facts about the Armadillo - Armadillo Facts and Information - The Jungle Store. Armadillos belong to the order Cingulata of the family Dasypodidae and are most closely related to sloths and anteaters. 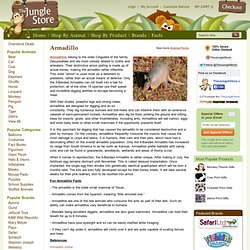 Their distinctive armor plating is made up of actual bones, making the armadillo rather inflexible. This outer “armor” is used more as a deterrent to predators, rather than an actual means of defense. Only the 3-Banded Armadillo can roll itself into a ball for protection, all of the other 19 species use their speed and incredible digging abilities to escape becoming a meal. With their stubby, powerful legs and strong claws, armadillos are designed for digging and do so constantly. They dig numerous burrows and bolt-holes and can interlink them with an extensive network of semi-permanent tunnels. It is this penchant for digging that has caused the armadillo to be considered destructive and a pest by humans. Armadillo Fact File. 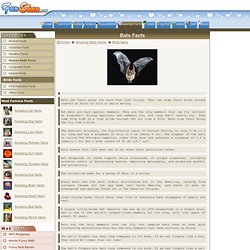 They can wrap their wings around insects or fruit to hold it while eating. But bats are very special mammals. They are the only mammals that can fly (without an airplane!) Flying squirrels are mammals too, but they don't really fly. They jump from high in a tree glide through the air like a kite. The smallest microbat, the Pipistrellus nanus of Central Africa, is only 4 cm (1.5 in) long and has a wingspan of only 12.5 cm (about 5 in). Bats always turn left when she or he leave their particular caves. Bat droppings in caves support whole ecosystems of unique organisms, including bacteria useful in detoxifying wastes, improving detergents, and producing gasohol and antibiotics. Vampire bat saliva breaks up blood clots. Vampire bats. 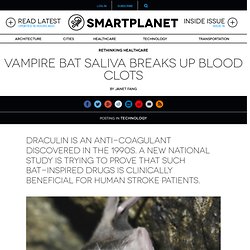 Draculin. [Tell me your best fang joke.] A new national study is underway to see if a compound extracted from their saliva can actually help patients survive a stroke. Someone in the US suffers a stroke every 40 seconds. Right now, doctors only have a 3-hour window to treat stroke patients before blood clots clog blood vessels in the brain. Blocking blood and oxygen flow can cause permanent brain damage, paralysis, speech problems, and even death. Lo and behold, vampire bat (Desmodus rotundus) saliva could extend that treatment window, reducing the severity of a stroke. My Little Brown Bat. Last October, when we went up to the birding tower for the Big Sit, Bill went to flip on the light in the tower room below. 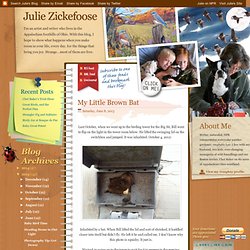 He lifted the swinging lid on the switchbox and jumped. It was inhabited. October 4, 2012: Bat toes. King cobra. Interesting Facts About the King Cobra Snake. Cobra Fast Facts. Facts About Cobra - Interesting & Amazing Information on Cobra Snakes. The very mention of a snake can bring uncomfortable feelings in many people.

On top of that, if the discussion is about cobras, you can expect people to break into a cold sweat or at least have goosebumps all over! The Cobra is not a single snake; rather it is a common name for the members of the family of venomous snakes known as Elapidae. The cobra is found in places that experience hot tropical climate like Philippines, Southern Asia and Africa. There are almost 270 different types of cobras that are found and all have short venom fangs and are considered to be extremely dangerous. Goat. Goat. 12 Strange Things About Goats: Accents, Mayors and More (Photos)

Ant. Ants. Diversity of Ant Mandibles. Click on an image to view larger version & data in a new window Introduction Mandibles ("jaws") are a crucial tool for many insects, but perhaps in no insect group are they more highly utilized than in the ants (Formicidae). Ants use their mandibles for a diverse array of activities, and are thus constrained by the need to have mandibles which can fulfill a number of functions. 10 Frightening Facts You Probably Didn't Know About Ants.

SExpand I have to state (regardless of others if so, they have to stated) that I AM TERRIFIED OF ANTS!!!! They are the only bug that scares me. I have a fear that can roughly be surmised as 'a fear of heavy objects, and how to lift them' Oit is very abstract and takes special instances) and ants are the sole creature that produce this form of loathing. I had ants infest my room this past year, and while I', terrified to be in moving cars due to a crash, ants send me into hysterics and I woke up my household just trying to find a way to get to my computer desk fro my door.

ANTS: Facts about ants. Dog. Dogs. #1 #8 10 Weird Facts About Dogs. Facts Every pet dog, from the sniveling Chihuahua to the towering Great Dane, is born with the heart of a wolf. Dogs are the domesticated version of the gray wolf and exhibit easily the greatest variation of any species on the planet. Without the dog, it is quite possible humans would still be primitive creatures, devoting our lives to gathering food and defending ourselves from the beasts that lurk at the edges of our campfires. Our dogs offer us protection, companionship, and loyalty to their dying breath.

21 Facts About Dogs That Will Blow Your Mind. Fact #20: 'Frito Feet' is the name of the phenomenon in which the bacteria on a dog's paws cause them to smell like corn chips. #8 10 Things You Didn't Know About Dogs. Author Bio Stephanie Pappas Stephanie interned as a science writer at Stanford University Medical School, and also interned at ScienceNow magazine and The Santa Cruz Sentinel. She has a bachelor's degree in psychology from the University of South Carolina and a graduate certificate in science writing from the University of California, Santa Cruz.

Dogs' Dazzling Sense of Smell. Koala. Koalas. Koalas, Koala Pictures, Koala Facts. Though often called the koala "bear," this cuddly animal is not a bear at all; it is a marsupial, or pouched mammal. Amazing and Interesting Facts about the Australian Koala. Learn how they care for their little baby cubs. Koala Fun Facts. Look at fact #1. Interesting Koala Facts - hunter koala.

How the Star-Nosed Mole ‘Sees’ With Its Ultra-Sensitive Snout.