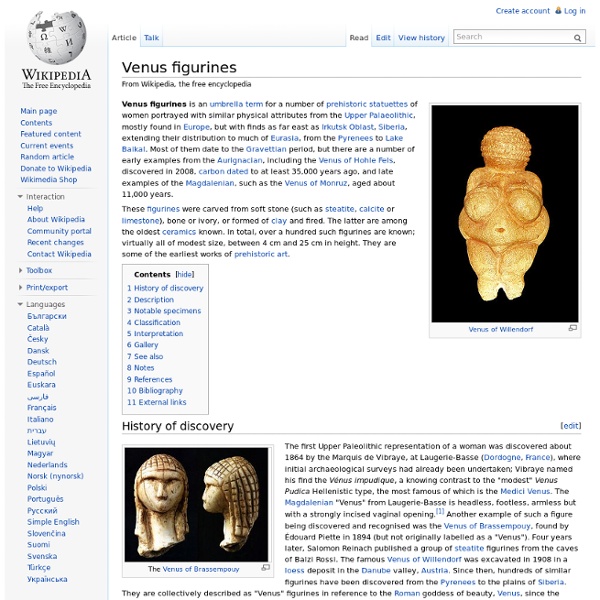 "Venus figurines" is an umbrella term for a number of prehistoric statuettes of women portrayed with similar physical attributes from the Upper Palaeolithic, mostly found in Europe, but with finds as far east as Irkutsk Oblast, Siberia, extending their distribution to much of Eurasia, from the Pyrenees to Lake Baikal. Most of them date to the Gravettian period, but there are a number of early examples from the Aurignacian, including the Venus of Hohle Fels, discovered in 2008, carbon dated to at least 35,000 years ago, and late examples of the Magdalenian, such as the Venus of Monruz, aged about 11,000 years. These figurines were carved from soft stone (such as steatite, calcite or limestone), bone or ivory, or formed of clay and fired. The latter are among the oldest ceramics known. In total, over a hundred such figurines are known; virtually all of modest size, between 4 cm and 25 cm in height. They are some of the earliest works of prehistoric art. History of discovery[edit] Notes[edit]

Terra (mythology) The word tellus, telluris is also a Latin common noun for "land, territory; earth," as is terra, "earth, ground". In literary uses, particularly in poetry, it may be ambiguous as to whether the goddess, a personification, or the common noun is meant. This article preserves the usage of the ancient sources regarding Tellus or Terra. Dedicatory inscription to Terra Mater fulfilling a vow (votum), 1st century AD The two words terra and tellus are thought to derive from the formulaic phrase tersa tellus, meaning "dry land". The 4th-century AD Latin commentator Servius distinguishes between tellus and terra in usage. Varro identifies Terra Mater with Ceres: Ovid distinguishes between Tellus as the locus ("site, location") of growth, and Ceres as its causa ("cause, agent").[13] Mater, the Latin word for "mother," is often used as an honorific for goddesses, including Vesta, who was represented as a virgin. Detail from a sarcophagus depicting a Mother Earth figure (3rd century AD)

Queen of Heaven The title Queen of Heaven has long been a Catholic tradition, included in prayers and devotional literature, and seen in Western art in the subject of the Coronation of the Virgin, from the High Middle Ages, long before it was given a formal definition status by the Church. Theological basis[edit] Queen of Heaven (Latin Regina Caeli) is one of many Queen titles used of the Virgin Mary. Pius XII explained on the theological reasons for her title of Queen in a radio message to Fatima of May 13, 1946, Bendito seja:[3] He, the Son of God, reflects on His heavenly Mother the glory, the majesty and the dominion of His kingship, for, having been associated to the King of Martyrs in the ... work of human Redemption as Mother and cooperator, she remains forever associated to Him, with a practically unlimited power, in the distribution of the graces which flow from the Redemption. Biblical basis[edit] A statue of the Assumption of Mary typically crowned with 12 stars. Historical practice[edit]

Jupiter (mythology) The consuls swore their oath of office in Jupiter's name, and honoured him on the annual feriae of the Capitol in September. To thank him for his help (and to secure his continued support), they offered him a white ox (bos mas) with gilded horns.[10] A similar offering was made by triumphal generals, who surrendered the tokens of their victory at the feet of Jupiter's statue in the Capitol. Some scholars have viewed the triumphator as embodying (or impersonating) Jupiter in the triumphal procession.[11] During the Conflict of the Orders, Rome's plebeians demanded the right to hold political and religious office. During their first secessio (similar to a general strike), they withdrew from the city and threatened to found their own. The augures publici, augurs were a college of sacerdotes who were in charge of all inaugurations and of the performing of ceremonies known as auguria. The role of Jupiter in the conflict of the orders is a reflection of the religiosity of the Romans.

Mut Nineteenth dynasty statue of Mut, part of a double statue, c. 1279-1213 BCE, Luxor Museum Mut, which meant mother in the ancient Egyptian language,[1] was an ancient Egyptian mother goddess with multiple aspects that changed over the thousands of years of the culture. Alternative spellings are Maut and Mout. She was considered a primal deity, associated with the waters from which everything was born through parthenogenesis. She also was depicted as a woman with the crowns of Egypt upon her head. Some of Mut's many titles included World-Mother, Eye of Ra, Queen of the Goddesses, Lady of Heaven, Mother of the Gods, and She Who Gives Birth, But Was Herself Not Born of Any. Changes of mythological position[edit] Much later new myths held that since Mut had no parents, but was created from nothing; consequently, she could not have children and so adopted one instead. Making up a complete triad of deities for the later pantheon of Thebes, it was said that Mut had adopted Menthu, god of war.

Minerva Etruscan Menrva[edit] Stemming from an Italic moon goddess *Meneswā ('She who measures'), the Etruscans adopted the inherited Old Latin name, *Menerwā, thereby calling her Menrva. It is assumed that her Roman name, Minerva, is based on this Etruscan mythology, Minerva was the goddess of wisdom, war, art, schools and commerce. She was the Etruscan counterpart to Greek Athena. Like Athena, Minerva was born from the head of her father, Jupiter (Greek Zeus). Worship in Rome[edit] Raised-relief image of Minerva on a Roman gilt silver bowl, 1st century BC As Minerva Medica, she was the goddess of medicine and doctors. In Fasti III, Ovid called her the "goddess of a thousand works". The Romans celebrated her festival from March 19 to March 23 during the day which is called, in the neuter plural, Quinquatria, the fifth after the Ides of March, the nineteenth, an artisans' holiday . Universities and educational establishments[edit] Societies and governmental use[edit] See also[edit] References Sources

Hera Portrayed as majestic and solemn, often enthroned, and crowned with the polos (a high cylindrical crown worn by several of the Great Goddesses), Hera may bear a pomegranate in her hand, emblem of fertile blood and death and a substitute for the narcotic capsule of the opium poppy.[2] A scholar of Greek mythology Walter Burkert writes in Greek Religion, "Nevertheless, there are memories of an earlier aniconic representation, as a pillar in Argos and as a plank in Samos."[3] Etymology[edit] The cult of Hera[edit] Hera may have been the first to whom the Greeks dedicated an enclosed roofed temple sanctuary, at Samos about 800 BC. We know that the temple created by the Rhoecus sculptors and architects was destroyed between 570- 60 BC. In Euboea the festival of the Great Daedala, sacred to Hera, was celebrated on a sixty-year cycle. Hera's early importance[edit] According to Walter Burkert, both Hera and Demeter have many characteristic attributes of pre-Greek Great Goddesses.[15] Epithets[edit]

Zeus Name The Chariot of Zeus, from an 1879 Stories from the Greek Tragedians by Alfred Church. The god's name in the nominative is Ζεύς Zeús /zdeús/. It is inflected as follows: vocative: Ζεῦ / Zeû; accusative: Δία / Día; genitive: Διός / Diós; dative: Διί / Dií. The earliest attested forms of the name are the Mycenaean Greek 𐀇𐀸, di-we and 𐀇𐀺, di-wo, written in the Linear B syllabic script.[14] Zeus in myth Zeus, at the Getty Villa, A.D. 1 - 100 by unknown. Birth When Zeus was about to be born, Rhea sought Gaia to devise a plan to save him, so that Cronus would get his retribution for his acts against Uranus and his own children. Infancy Rhea hid Zeus in a cave on Mount Ida in Crete. King of the gods Zeus and Hera Consorts and children 2The Charites/Graces were usually considered the daughters of Zeus and Eurynome but they were also said to be daughters of Dionysus and Aphrodite or of Helios and the naiad Aegle. 3Some accounts say that Ares, Hebe and Hephaestus were born parthenogenetically.