Amazing Places To Experience Around The Globe (Part 2) 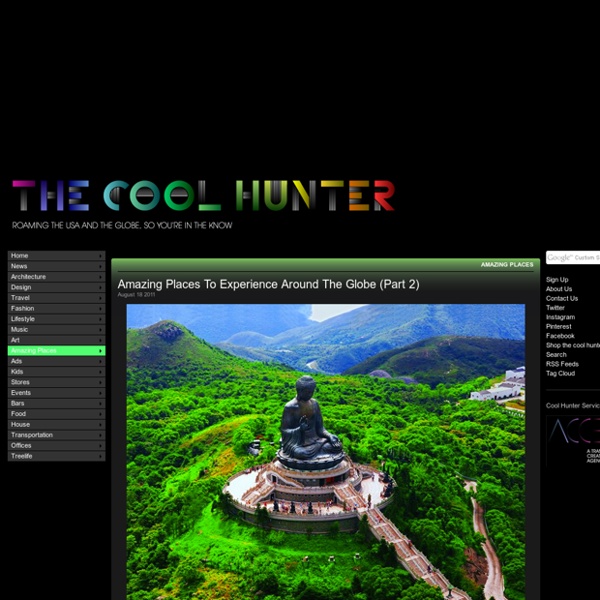 19 More Unlikely Animal Friends It seems there are a lot of animals out there who don’t mind making friends outside of their species. Here’s a fresh list of unlikely animal friends. Related Posts: The 33 Most Beautiful Abandoned Places In The World Many people doesn’t know, and didn’t even heard about these famous abandoned places. Many of these places are really something amazing, but they are also really sad when you take a closer look at them. On the folowing list, you can see abandoned planes, abandoned ships, as well as the abandoned houses, and so many other things, that are really amazing and magnificent. Amazing Places (Part 3) Devetashkata Cave - Bulgaria Ben Bulben at County Sligo, Ireland Shark Island - Sydney Baatara Gorge Waterfall, Tannourine - Lebanon Abel Tasman National Park - New Zealand Myrtos Beach, Kefalonia - Greece

Places That Are Actually Real But Don't Look So These places look so unreal, but they are real! Maybe some of you were on one of these beautiful place, and if one of you did, you are than really happy person who live on this planet! Just look how this photos are cool and so sweet. Amazing Places (Part 4) Intercontinental Hotel and Thalasso Spa - Bora Bora Blue Lagoon, Reykjavik - Iceland Positano, Amalfi Coast, Italy The Dunes in Peru Pongua Falls, Vietnam Students are students - StumbleUpon In general, the life of a student is hard, but the student life still remains in memory as the most fun. And that is the sames all over the world. Top 10 Most Beautiful Cities Not Situated in Europe Yes, we all heard it; the most beautiful cities are found in Europe. You could hardly find someone who will deny Europe is the home for some of the most beautiful cities in the world. For this reason, the cities listed here are not found in Europe but rather in other continents of the world.