Sea Turtles and other creatures

Super-female bearded dragons 'more male than males' - Science News. Updated When is a female a female? 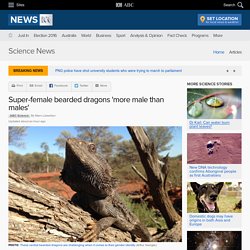 And when is a male a male? These are the questions that scientists continue to ponder after the latest research on an Australian lizard that reverses its sex when exposed to high incubation temperatures. Key points Incubation temperature can create female lizards with male chromosomesThese lay more eggs than standard femalesThey are also bolder in their behaviour than the average maleThis strange combination could provide them with an advantage. Melbourne Aquarium celebrates birth of 45 weedy sea dragons, 'Marcel Marceau' of the ocean. Updated Melbourne Aquarium is celebrating the survival of 45 newborn weedy sea dragons, which are difficult to breed and rear in captivity. 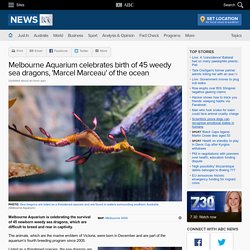 The animals, which are the marine emblem of Victoria, were born in December and are part of the aquarium's fourth breeding program since 2005. Listed as a threatened species, the sea dragons are found in the waters surrounding southern Australia. Baby fish may get lost in silent oceans as carbon dioxide rises - Science. Posted Future oceans will be much quieter places, making it harder for young marine animals that navigate using sound to find their way back home, new research has found. 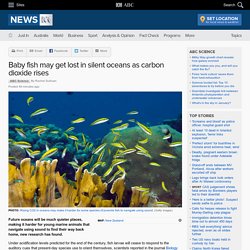 Under acidification levels predicted for the end of the century, fish larvae will cease to respond to the auditory cues that present-day species use to orient themselves, scientists reported in the journal Biology Letters. While ocean acidification is known to affect a wide range of marine organisms and processes such as smell, until now its effect on marine soundscapes and impact on the larvae of marine animals was unknown. The ocean is filled with sounds that carry information about location and habitat quality, study co-author Sir Ivan Nagelkerken said.

Polar bears will die out if global warming is not reversed, US report finds - Climate Change - Environment. In a draft recovery plan for polar bears produced by the US Fish and Wildlife Service, it says: "The single most important step for polar bear conservation is decisive action to address Arctic warming. 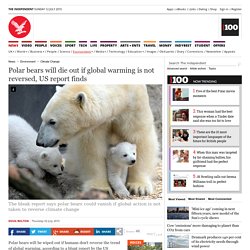 " "Short of action that effectively addresses the primary cause of diminishing sea ice, it is unlikely that polar bears will be recovered. " Polar bears eat, mate and give birth on sea ice. Greenhouse gas emissions contribute to global warming, which is reducing the levels of summer sea ice in the Artic. No sea ice means polar bears will struggle to survive. If global warming and sea ice depletion is to be addressed, it will require global action, the report says. 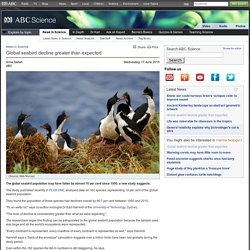 The study, published recently in PLOS ONE, analysed data on 162 species, representing 19 per cent of the global seabird population. They found the population of those species had declined overall by 69.7 per cent between 1950 and 2010. "It's an awful lot," says co-author ecologist Dr Edd Hammill of the University of Technology, Sydney. 100-Year-Old Turtle, the Last of Her Kind, Could Soon Be a Mom - Extinction Countdown - Scientific American Blog Network. I have written about a lot of causes of extinction over the years. 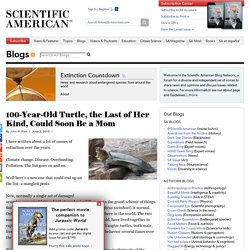 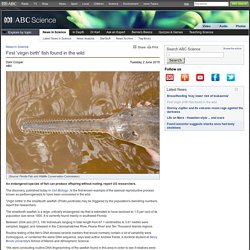 Rapidly evolving lizards show how some creatures can adapt to beat climate change. Lizards from the deserts of Australia to the tops of mountains in Costa Rica have given us insights into how animals take advantage of their environment to be less cold-blooded. 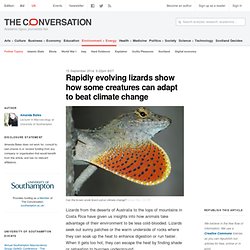 Lizards seek out sunny patches or the warm underside of rocks where they can soak up the heat to enhance digestion or run faster. When it gets too hot, they can escape the heat by finding shade or retreating to burrows underground. In particular, tropical species, including lizards, are thought to be especially vulnerable to climate warming because they already live at temperatures that can be dangerous. Without the sweat glands or metabolic control that mammals take for granted, lizards can heat up very quickly if they find themselves caught out in the sun for too long. Species living in the tropics are also thought to have behavioural adaptations that are finely tuned to stable and predictable weather regimes, such as daily activity rhythms. Presentations at the Annual International Sea Turtle Symposium. 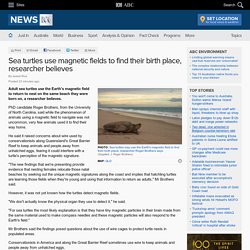 PhD candidate Roger Brothers, from the University of North Carolina, said while the phenomenon of animals using a magnetic field to navigate was not uncommon, very few animals used it to find their way home. He said it raised concerns about wire used by conservationists along Queensland's Great Barrier Reef to keep animals and people away from unhatched eggs, fearing it could interfere with a turtle's perception of the magnetic signature.