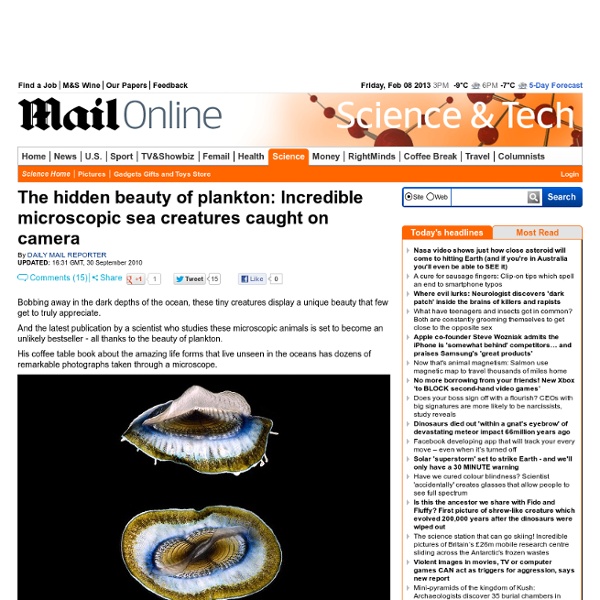 By Daily Mail Reporter Updated: 16:31 GMT, 30 September 2010 Bobbing away in the dark depths of the ocean, these tiny creatures display a unique beauty that few get to truly appreciate. And the latest publication by a scientist who studies these microscopic animals is set to become an unlikely bestseller - all thanks to the beauty of plankton. His coffee table book about the amazing life forms that live unseen in the oceans has dozens of remarkable photographs taken through a microscope. Amazing life forms: Dr Richard Kirby's passion for plankton has led to a set of marvellous pictures which feature in his book Ocean Drifters, a secret world beneath the waves like these tiny Jellyfish Hidden beauty: Stunning images of a Horseshoe worm (left) and a Moon Jellyfish The book also points out that without the miniature creatures we would have no fish, oil, gas or clouds, and the sea would lose its distinctive smell. Tiny creatures: Images of Sea Angels (left) and Acantharea Related:  Sea Creatures

lion fish amung silver Personal Budget Software - Finance Software for Windows & Mac Welcome to stress-free finances. Our award-winning budget interface helps you get off the financial roller coaster. Break account balances into meaningful categories, save for longer-term goals, and quickly determine if that impulse purchase will affect your finances adversely now and down the road. Cloud Sync - stay on budget everywhere. Check balances and record transaction on the go with your phone. All new interface. Budgeting has never looked this good. Complete Feature List Upgrading from YNAB 3?

How deep is the ocean, how high am I? How deep is the ocean, how high am I. via : Ghost Room External Stimuli : Hengki Koentjoro, Flickr Stream, Chet Baker Themes : Photography Nodes : cool jazz, gelatinous, Hengki Koentjoro, jellyfish, ocean, underwater Painless Time Tracking Time Tracking Built for Teams A simple, clean user interface that’s a joy to use. No fuss one-click timer. Track multiple projects and clients at once. Convenient and Everywhere Track time from home, the office, or on the go. Finally, time tracking that’s as painless as it can be. See for yourself with a 30-day free trial. Try Harvest Free Creative teams around the world rely on Harvest "We do a lot of billable client work, so tracking time on those projects is essential." - Cold Coffee Media: Creative Marketing "We love the Harvest UI. - Wildfire: Mobile App Development

A Seahorse Inspects a Diver’s Watch Jun 27, 2012 In this remarkable capture, a seahorse checks out a diver’s watch (and own reflection) underwater. Given the clarity of the clouds in the reflection, this was likely taken quite close to the surface. - Seahorse is the title given to forty-seven species of marine fish in the genus Hippocampus - They are mainly found in shallow tropical and temperate waters throughout the world, and prefer to live in sheltered areas such as seagrass beds, estuaries, coral reefs, or mangroves - Seahorses range in size from 0.6 to 14 inches (1.5 – 35.56 cm). [Source: Wikipedia]

The 12 Trends That Will Rule Products In 2013 Near the end of 2012, a group of us at Ziba got together to review what we’d learned over the course of the year. Working with dozens of clients who serve customers around the world, we designers spend a lot of time observing people as they interact with technology, services, and experiences, noticing how they seek solutions to everyday problems and make decisions. In the process, certain patterns emerge so forcefully that they’re practically unavoidable. Meeting over three sessions spread out over a week, 23 Zibites (designers, researchers, and creative directors) discussed the patterns we’d seen, and distilled them down to the 12 insights we thought were most current and useful, to us and to our clients. Each one is presented here, as a brief essay that suggests how it will affect business practices in 2013, and as an illustration created by one of Ziba’s designers. 1. Our understanding of how we decide has evolved dramatically over the past 20 years, and it paints a messy picture. 2.

Puffer Fish Creates Ocean Floor ‘Crop Circles’ Right around this time last year, news broke about the discovery of an amazing little puffer fish capable of creating elaborately designed ‘crop circles’ at the bottom of the ocean as part of an elaborate mating ritual. The behavior was first documented by a photographer named Yoji Ookata who later returned with a film crew from the Japanese nature show NHK which later aired an episode about the fish. Even as articles bounced around the web it was still difficult to imagine how a tiny fish could create such a large design in the sand, even when staring directly at photographic evidence. Finally, video has emerged that shows just how the little guy delicately traverses the sand in a rotating criss-cross pattern to create a sort of subaquatic spirograph. The textured sand sculpture not only attracts mates but also serves as protection when the fish pair and lays eggs.

Τροφή για τη σκέψη / Food for thought Portuguese Man o' War "Gosh" you might say, "that's one weird looking jellyfish". Well, you'd be partly right. Certainly it looks rather odd but it isn't a jellyfish, it isn't even one animal. They are all either a kind of polyp, which are like really small sea anemones, or medusae, similar to tiny jellyfish, but here they are all connected to each other and are unable to survive on their own. It gets its name from the shape of its sail which resembles that of 16th century warships like man of wars and caravels. The body beneath the pneumatophore is dominated by the feeding polyps which each have a single tentacle dangling beneath them. They start to reel their load up toward our third organism, the gastrozooids. The final organism are the medusae used for reproduction, the gonozooids, which are hermaphrodite - each have both the male and female parts. Did I say groups? I don't want to get all 'existential crisis' on you but seriously, what do you see when you look in the mirror? Ha!

About Me California flag from www.ultimateflags.com Fourth-generation Californian, with thousands of stories from travels in 36 countries and hundreds of lessons learned from living, working and successfully navigating Greek bureaucracy for 16 years as an unmarried non-EU citizen. Newspapers and the wider public call me an American in Athens, which was the name of my original blog. I first came here as a solo nomad when Greece still used drachmas and natives were hospitable to foreigners. Four months later, I was back in Greece with nowhere to live, no job, no permit, no connections, no family or boyfriend to help, no Greek language skills, no funding or inheritance, no rent-free or mortgage-free property, and no parents or safety net back home. In this post-9/11 world I’ve been forced to admit I’m American by nationality, though I’m more a world citizen with a U.N. family of friends that bring liveliness, culture and color to what I call my life. Why I’m qualified to write about Greece Mission

Pacific Leaping Blenny According to a new paper published in the journal Animal Behaviour, the Pacific leaping blenny (Alticus arnoldorum) – a unique fish that lives on land and can leap large distances – uses camouflage to avoid attacks by predators such as birds, lizards and crabs. A Pacific leaping blenny at Taga’chang, Guam. Image credit: © Georgina Cooke, via Australian Museum. The Pacific leaping blenny is a 4 to 8-cm-long tropical fish found in reefs in Samoa and the Marianas, Society, and Cook Islands, in the western and southern Pacific Ocean. Pacific leaping blennies move quickly over complex rocky surfaces using a unique tail-twisting behavior combined with expanded pectoral and tail fins that let them cling to almost any firm surface. Australian biologists from the University of New South Wales studied Pacific leaping blennies in their natural habitat on the tropical island of Guam. “They were virtually identical in each case. Bibliographic information: Courtney L.

INSIGHT - SOLARBRUSH ROBOTS CLEAN SOLAR GENERATORS Studies proof efficiency losses of solar power plants due to soiling, such as sand, dust and other dirt. The data ranges from three to six percent in Europe (annually) and up to 35 % in the Middle East (monthly) of efficiency to be lost because of less light coming through to the solar cells. SOLARBRUSH was first to set the focus of the robotic maintenance to arid regions: In the so called "Sunbelt countries" solar radiation is so high it enables solar energy to be competitive towards fossil fuels in many cases. Massive price drops for solar technology are driving further installations, which is expected to represent the cheapest form of energy around the equator. SOLARBRUSH works on a cost-effective solution to secure the efficiency of solar energy in these arid markets.We are the global pioneer in robots for solar power plants, as the inventor, Ridha Azaiz, developed the first robot for the purpose of cleaning solar panels back in 1998.

Elysia chlorotica Distribution[edit] Elysia chlorotica can be found along the east coast of the United States, including the states of Massachusetts, Connecticut, New York, New Jersey, Maryland, Florida (east Florida and west Florida) and Texas. They can also be found as far north as Nova Scotia, Canada.[1] Ecology[edit] This species is most commonly found in salt marshes, tidal marshes, pools and shallow creeks, at depths of 0 m to 0.5 m.[1] Description[edit] Feeding[edit] The incorporation of chloroplasts within the cells of Elysia chlorotica allows the slug to capture energy directly from light, as most plants do, through the process known as photosynthesis. Life cycle[edit] Cleavage[edit] Gastrulation[edit] Elysia chlorotica gastrulation is by epiboly: the ectoderm spreads to envelope the mesoderm and endoderm.[3][broken citation] Larval stage[edit] See also[edit] References[edit] External links[edit]