The World's Smallest and Deadliest Animals 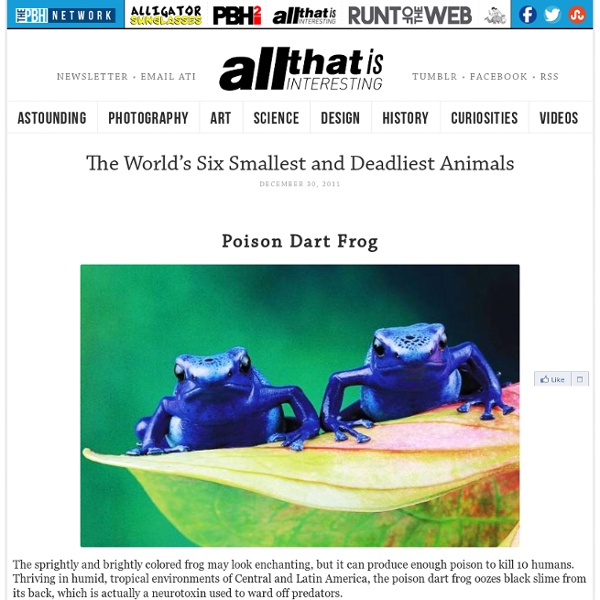 Smallest And Deadliest Animals: Poison Dart Frog The sprightly and brightly colored frog may look enchanting, but it can produce enough poison to kill 10 humans. Thriving in humid, tropical environments of Central and Latin America, the poison dart frog oozes black slime from its back, which is actually a neurotoxin used to ward off predators. Australian Box Jellyfish Found across the northern half of Australia – particularly in Queensland – the box jellyfish washes up on the shores after heavy rain and high tide. Related:  Miscellaneous Animals

Masters of Disguise By Wil Longbottom Updated: 07:29 GMT, 8 December 2011 Stare at these pictures for long enough and you might just spot some clever creatures playing the ultimate game of hide and seek. This Satanic Leaf-tailed Gecko is barely visible against the leaves in the Andasibe-Mantadia National Park, Madagascar. These amazing animals are true masters at blending effortlessly into their environment as a means of survival in the natural world. Blending in: This Satanic Leaf-tailed Gecko hides from predators in Andasibe-Mantadia National Park, Madagascar, or is it just a leaf? Nothing to see here: A Bat-faced Toad hides among dead leaves in Amacayacu National Park, Colombia Barking up the wrong tree: It's nearly impossible to pick out this Lichen Spider at the Erawan National Park in Thailand From frogs to fish and bugs to birds, this collection of images shows the animal kingdom's outstanding camouflage ability. Animals use two basic methods of concealment in a bid to hide from predators and catch prey.

50 Weird Science Tidbits – 5 by Science News Review Science news for the average citizen. Feb 15 at 6:06pm by Aileen This is the final installment of our 50 Weird Science tidbits, odd factoids and strange-but-true trivia. There are of course more weird things in heaven and earth, Horatio, than are dreamt of in your philosophy. But these 50 should get you through at least one championship round down at the pub. Researchers from Canada found that plants can have complex social interactions despite being… um, vegetative. The not-so humble mosquito wins this award hands down. Both the males and females of the African bat bug, a relative of bed bugs, have evolved fake genitals in order to protect themselves from the species’ violent mating practices. In seahorses it’s the male who gets pregnant. A Swedish company has developed a new, environmentally friendly means of dealing with the bodies of the dead. A red dwarf star labeled Gliese 710 is traveling toward our sun at nearly 50 times the speed of sound.

Frog Photos "I'd kiss a frog even if there was no promise of a Prince Charming popping out of it. I love frogs." ~ Cameron Diaz Funny Frogs by Sean Crane Parasitic fly could account for disappearing honeybees - life - 03 January 2012 Parasitic flies that turn honeybees into night-flying zombies could provide another clue to cracking the mystery of colony collapse disorder. Since 2007, thousands of hives in the US have been decimated as bees inexplicably go missing overnight. The best explanation so far is that multiple stresses, perhaps parasitic mites, viruses or pesticides, combine to tip the bees over the edge. John Hafernik of San Francisco State University in California and colleagues discovered that hosting Apocephalus borealis, a parasitic fly found throughout North America, makes bees fly around in a disoriented way at night, when they normally roost in the hive, before killing them. Although unlikely to be the sole cause of colony collapse disorder, Hafernik thinks the parasitic fly discovery may help explain why bees quit their hives. Since the discovery, the parasitic flies have been found at 77 per cent of sites in San Francisco Bay, and in hives in South Dakota. Journal reference: PLoS One, in press

20 Amazing Animal Photography Shots Animal photography is one of the most challenging and rewarding form of photography. Stalking wildlife animal to take pictures of them is quite difficult, because in any moment your subject could run or worst attack you. Here are 20 amazing animal photography shots: Related Posts Cute Photos of Animals with Big Eyes Pictured: Conservationist gently strokes tiger sharks Pets in Halloween Costumes Forms of Animal Torture Things To Know Before Getting A Pet [Infographics] 12 Interesting Animal Facts [Photos] - Part 2 Cat Friends - Cute Pictures Worlds fastest man adopts world fastest cat Camoflauge in Animals Mimicry Some animals and plants look like other things -- they mimic them. Mimicry is another type of deceptive coloration. It can protect the mimic from predators or hide the mimic from prey. If mimicry was a play, there would be three characters. The Model - the species or object that is copied. The Mimic - looks and acts like another species or object. The Dupe- the tricked predator or prey. The poisonous coral snake and the harmless king snake look a lot alike. The viceroy butterfly and monarch butterfly were once thought to exhibit Batesian mimicry where a harmless species mimics a toxic species. Could You Tell the Difference? Aggressive Mimicry Some mimics look like something else, not to avoid predators, but to catch prey. The frogfish or angler fish lures its prey to where it can strike. Cryptic Coloration Some organisms look so much like another object that they almost disappear! Eyespots: I'm Watching You! Some butterflies and moths have large eyespots.

Evolution’s Most Effective Killer: Snake Venom View Photo Gallery As predators, snakes are missing a few key attributes. They have no legs to chase down their prey, no paws to knock down quarry, and no claws to hold their victims. But none of these deficiencies matters much, because evolution has handed snakes the ultimate weapon: venom. With it, the several hundred types of venomous snakes can kill or debilitate before their victims escape. Their venom has given snakes the ability to be small yet effective hunters, and they have spread to fill every ecological niche—as long as the environment is warm enough for them to stay in motion. In general, scientists agree on how snakes' venom glands evolved, but that's not the case for the poisons themselves. But Australian researcher Bryan Fry, one of the world's leading experts on venomous snakes, has another theory. Fry also believes that this ability arose a single time, well over 100 million years ago, in one of the earliest ancestors of modern snakes.

Deer Avoid Drowning by Boarding Charter Boat I just learned about this odd and extraordinary wildlife rescue that happened in October in Alaska. It's such an amazing story, I don't know why I didn't hear about it earlier. According to the report in the Juneau Empire, Tom Satre, his sister Sharon Kelly and a few other family members were heading across Taku Inlet near Juneau on Tom's charter boat for a picnic at the State Marine Park. About a mile offshore, Sharon, a birder, spotted something odd in the water coming towards the boat through her binoculars. Four distressed Sitka deer swim desperately towards the Alaska Quest Charter Boat. Even though Sitka deer are known for their swimming ability and often cross large bodies of water between islands, these four where in obvious distress in the frigid water and whipping winds that had stirred up two to three foot swells in the inlet. Unable to propel themselves out of the water in their exhaustion, they had to be hauled out onto the deck, where they collapsed. Photos by Sharon Kelly.

Breath-taking wildlife photography Passion is something which sometimes comes out wildly in the form of Wildlife photography. A love for nature and animals and the courage to adventure in jungles kindles the spark to go wild and capture those moments which remain unexplored and which may pose a threat at times if not alert. Wild life photography is also sending an alarming message to all of us to protect some of these endangered species. Wildlife photography also proves a milestone in protecting the wild animals which are becoming extinct due to many threats by humans such as deforestation, poaching and climatic conditions. Another important help is, they capture some of the endangered species and collect those precious details which could save these animals from the verge of extinction. A thorough knowledge about the climatic conditions, moods of the animals and a detailed exposure to the nitty-gritty of the cameras are the most essentials qualities for a wild life photographer. Wildlife photography for beginners

Animal Mind Control Scott Youtsey/Miracle studios A normally insatiable caterpillar suddenly stops eating. A quick look inside its body reveals the reason: dozens of little wasp larvae gnawing and secreting digestive enzymes to penetrate its body wall. They have been living inside the caterpillar for days—like little vampires, feeding on its “blood”—and are finally making their exodus to build their cocoons on its bright-green exterior. In the caterpillar’s brain, a massive immune reaction is taking place—the invertebrate equivalent of a cytokine storm—and among the factors being released is an invertebrate neurohormone called octopamine. “It’s a very important compound for controlling behavior in insects,” says invertebrate behavioral physiologist Shelley Adamo of Dalhousie University in Halifax, Nova Scotia. But the parasitic larvae don’t stop there. “The real nuts and bolts have yet to be figured out for any system,” says Adamo. Pet cockroaches Fatal attraction Swim towards the light Suicidal insects

Amazing photographs of snakes like you’ve never seen before Most people fear snakes and don’t want to even look at them. Still they are fascinating reptiles in different colors and lengths. The photographer Guido Mocafico saw the beauty in them, and took amazing shots of them that it almost looks like detailed paintings. While some people take photos of dangerous snakes, these guys are keeping pythons, among other dangerous animals, as pets.

30 Japanese hornets kill 30,000 European honeybees; video By Gavin Allen Updated: 16:54 GMT, 13 January 2012 Tens of thousands are dead, hundreds more of the dying lie writhing on the battlefield, powerless to protect their children. These horrifying and yet fascinating scenes are the highlights of a three-hour battle between just 30 giant Japanese hornets and 30,000 European honeybees. The video, from a National Geographic documentary called Hornets From Hell, shows a full-scale attack on the honeybees' comb in order that the hornets can get at their larvae. See the video below... Fight! Slaughter: Thousands of honeybee corpses litter the ground beneath the hive as the hornets hover over the entrance to the hive to continue the killing The mass slaughter is possible because the European honeybees did not grow up around the Japanese Hornets and thus have no defence against them. Vespa velutina - the hornet's Latin name - is believed to have hit Europe in 2004 after hitching a ride to France on some pot plants transported from China.

50 Cute Animal Photos "Love the animals: God has given them the rudiments of thought and joy untroubled." ~ Fyodor Dostoyevsky "An animal's eyes have the power to speak a great language." ~ Martin Buber "Most pets display so many humanlike traits and emotions it's easy to forget they're not gifted with the English language and then get snubbed when we talk to them and they don't say anything back ~ Stephenie Geist "Until one has loved an animal, a part of one's soul remains unawakened." ~ Anatole France Photo Credits: Tigers Deluxe, Salvador Sabater, Howard Ruby, Marina Cano and others. Photo copyright belongs to photo authors. Latest and updated 1Y0-A22 study guides from Pass For Sure are best companions for your online preparation.