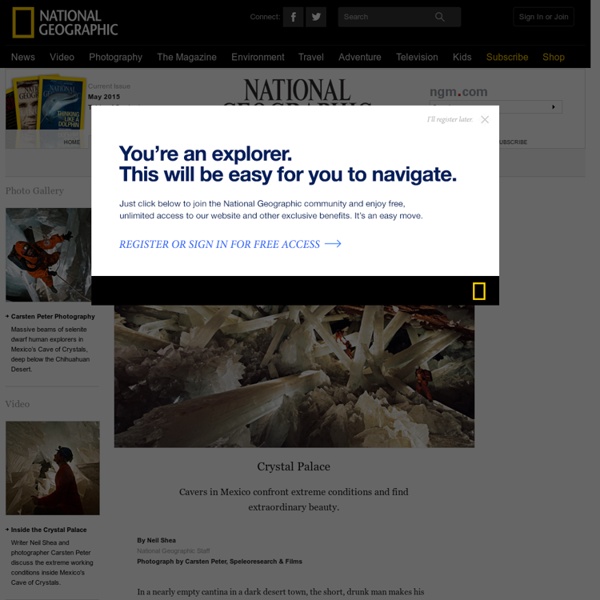 In a nearly empty cantina in a dark desert town, the short, drunk man makes his pitch. Beside him on the billiards table sits a chunk of rock the size of home plate. Dozens of purple and white crystals push up from it like shards of glass. "Yours for $300," he says. "No? One hundred. This remote part of northern Mexico, an hour or so south of Chihuahua, is famous for crystals, and paychecks at the local lead and silver mine, where almost everyone works, are meager enough to inspire a black market. Nothing compares with the giants found in Cueva de los Cristales, or Cave of Crystals. It takes 20 minutes to get to the cave entrance by van through a winding mine shaft.

This girl ages into an old woman before your eyes without you noticing I have a friend who married a Japanese woman years ago. One day he came to work one day stunned. You could see that his mind was just bent on something all day. Finally, I asked him what was wrong. He simply replied "...I went to bed last night and my wife was beautiful, and this morning, she is ugly...I mean, she wasn't ugly because it was first thing in the morning and she had bed head...I mean, she's ugly. When Animals Fall from the Sky The surprising science of animal rain. By Justin Nobel on March 18, 2014 Photo Illustrations by Gluekit In the 1999 fIlm “Magnolia,” a star-studded ensemble about Los Angeles lives that collapse and come together on a single day, the weather is practically the main character.

Centralia mine fire The Centralia mine fire is a coal seam fire that has been burning underneath the borough of Centralia, Pennsylvania, United States since at least May 27, 1962. The cause of the fire is suspected to be from a trash burning that hit a coal strip in a cave. The fire burns in underground coal mines at depths of up to 300 feet over an eight-mile stretch of 3,700 acres.[1] As of 2015[update], the fire continues to burn. At its current rate, it could burn for over 250 more years.[2] Apollo F-1 engines recovered from the bottom of the Atlantic by Bezos Expeditions Bezos is certain it's from Apollo 11, but I haven't heard of a confirmation yet. Everything has a serial number though, so once they find a readable one should be able to verify Yeah, he looked at the trajectory of Apollo 11 off the launch pad (as compared to all of the other Saturn V launches) and was able to get a rough idea of where those particular engines would have fallen in the ocean. I've heard that they have not identified any serial number anywhere yet, but NASA still has the records in its archives (or those of the contractors) so once the Bezos team finds a number they can check it out. Space.com had a article on this a few months ago and NASA actually has a map showing where each Saturn V first stage came down in the ocean

MIMIC-TPW Global | Global-2 | North Atlantic | West Pacific | East Pacific | Indian Ocean | Australia/Fiji Current time: Sat, 12 Apr 2014 22:47:36 GMT Animations: Recent / FTP archive | Images: Recent / FTP archive | Product Description This page automatically updates every 5 minutes Bearded Vultures Are The Most Punk Rock Animals In The World I love these guys, read up about them a lot. (I don't work with birds but their biology and behavior are fascinating.) They've got a robust system for dealing with the incredible amount of calcium they eat, both to digest it (lots of acid) and to excrete it. They've got a rather expansible esophagus and no crop/diverticulum to accidentally snag on bone fragments. And there's photos somewhere around here of one taking off with a rib sticking out of its beak.

This eerie animation was hand-drawn with ink, coffee and white-out, and it will melt your face Whiteout does have the benefit of being quick-drying and leaving a textured pattern that looks quite nice, and will happily accept inks while layering fully opaquely over the same inks as well. White ink would be too transparent to layer in the same way this is, and would not preserve the chroma of any pigmented ink used over it. You could certainly get similar results using gesso or white acrylic paint, sure, but with way less efficiency as it would need several minutes to dry, not seconds, which I imagine is a benefit with animation. Not to mention, both coffee and whiteout are relatively cheap and readily available. Pigment inks can be expensive and difficult to locate in some areas.

Before A Solar Eclipse, The Whole World Goes Wavy Bull. The phenomenon is called "a glitch". This is the internet. The girl who gets gifts from birds Image copyright Lisa Mann Lots of people love the birds in their garden, but it's rare for that affection to be reciprocated. One young girl in Seattle is luckier than most. She feeds the crows in her garden - and they bring her gifts in return. Eight-year-old Gabi Mann sets a bead storage container on the dining room table, and clicks the lid open. This is her most precious collection.

St. Elmo's fire St. Elmo's fire on a ship at sea St. Elmo's fire is named after St. Erasmus of Formia (also called St. Elmo, one of the two Italian names for St. Snakes in Alabama: What You Need to Know - Extension Daily People cannot resist the call of the outdoors when the weather warms up. Wildlife will begin to move with warmer weather too. Snakes are one type of wildlife that make many people anxious. But armed with some some basic information and facts, people can reduce their stress about snakes. More than 40 species live in Alabama . Only six of these are venomous.