Snake. Platypus. Platypus. Fun Facts About Platypus. This placid-looking male platypus has a secret weapon: spurs on its hindfeet that are connected to a gland that produces toxic venom. 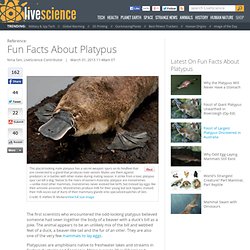 Males use them against predators or in battles with other males during mating season. A strike from a toxic platypus spur can kill a dog. Native to the rivers of eastern Australia, platypus are monotremes—unlike most other mammals, monotremes never evolved live birth, but instead lay eggs like their amniote ancestors. Monotremes produce milk for their young but lack nipples; instead, their milk oozes out of ducts of their mammary glands onto specialized patches of skin.Credit: © AMNH/ R. 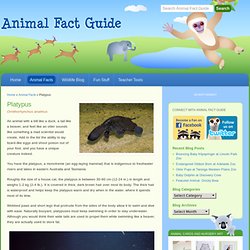 Add to the list the ability to lay lizard-like eggs and shoot poison out of your foot, and you have a unique creature indeed. You have the platypus, a monotreme (an egg-laying mammal) that is indigenous to freshwater rivers and lakes in eastern Australia and Tasmania. Roughly the size of a house cat, the platypus is between 30-60 cm (12-24 in.) in length and weighs 1-2 kg (2-4 lb.). It is covered in thick, dark brown hair over most its body.

The thick hair is waterproof and helps keep the platypus warm and dry when in the water, where it spends most of its time. Webbed paws and short legs that protrude from the sides of the body allow it to swim and dive with ease. The Weird, Wacky World of The Platypus. Long has the platypus been referred to as a “freak” or a “joke by God.” 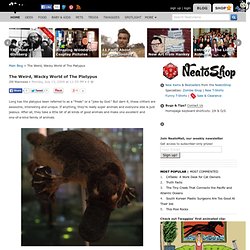 But darn it, these critters are awesome, interesting and unique. If anything, they’re really super animals and everyone else is just jealous. After all, they take a little bit of all kinds of good animals and make one excellent and one-of-a-kind family of animals. Photo Via Urville Djasim [Flickr] The Platypus Is Not A FakeMany of you have likely never seen a platypus in your local zoo. Now just imagine you’re living back in 1798, when Europeans first discovered the creature. It’s Named For Its Flat Feet and Bird SnoutThis is one critter that is very adequately named. In 1800, physiologist Johann Blumenbach described the platypus as Ornithorhynchus paradoxus, meaning “paradoxical bird snout.”

Plural ProblemsYou may have noticed this article has so far only mentioned the animal in its singular form. Platypuses, Platypus Pictures, Platypus Facts. The platypus is among nature's most unlikely animals. 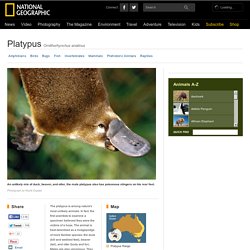 In fact, the first scientists to examine a specimen believed they were the victims of a hoax. The animal is best described as a hodgepodge of more familiar species: the duck (bill and webbed feet), beaver (tail), and otter (body and fur). Snail. Snails. Interesting Facts About Snails. Radula - teeth. Weird Medicine – Medicational Snails. Posted on07 August 2012. 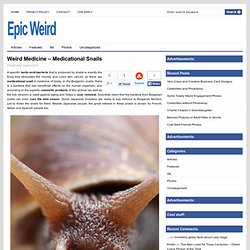 A specific lactic-acid bacteria that is produced by snails is exactly the thing that stimulates the imunity and cures skin cancer, so there are medicational snail in medicine of today. In the Bulgarian snails, there is a bacteria that has beneficial effects on the human organism, and according to the experts, cosmetic products of this animal (as well as the live version) is used against aging and helps in scar removal. Scientists claim that the bacteria from Bulgarian snails can even cure the skin cancer.

Some Japanese investors are ready to pay millions to Bulgarian farmers, just to foster the snails for them. Hippo. Hippopotamus. Ivory. Ivory Is a hard, white material, derived from the tusks and teeth of animals, that is used in art or manufacturing. 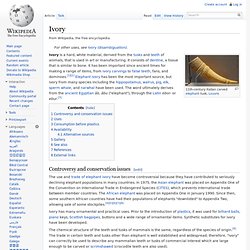 It consists of dentine, a tissue that is similar to bone. It has been important since ancient times for making a range of items, from ivory carvings to false teeth, fans, and dominoes.[1][2] Elephant ivory has been the most important source, but ivory from many species including the hippopotamus, walrus, pig, elk, sperm whale, and narwhal have been used. The word ultimately derives from the ancient Egyptian âb, âbu ("elephant"), through the Latin ebor- or ebur.[3] Controversy and conservation issues[edit] Fun facts about the Hippopotamus - Hippopotamus Facts and Information - The Jungle Store. The Hippopotamus is the 3rd largest animal after elephants and rhinos. 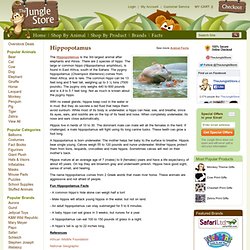 There are 2 species of hippo. The large or common hippo (Hippopotamus amphibius), is found in East Africa, south of the Sahara. The pygmy hippopotamus (Choeropsis liberiensis) comes from West Africa, and is rare. The common hippo can be 13 feet long and 5 feet tall, weighing up to 3 ½ tons (7000 pounds). The pygmy only weighs 440 to 600 pounds and is 4.9 to 5.7 feet long. With no sweat glands, hippos keep cool in the water or in mud. Hippos live in herds of 10 to 30. A hippopotamus is born underwater. Hippos mature at an average age of 7 (males) to 9 (females) years and have a life expectancy of about 45 years. The name hippopotamus comes from 2 Greek words that mean river horse. Fascinating facts about the hippo. The hippo’s yawn is not a sign of sleepiness or boredom but is actually a threat gesture, displaying long, thick, razor-sharp canine teeth, or tusks, with which it is capable of biting a small boat in half. 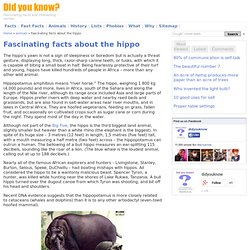 Being fearlessly protective of their turf and young, hippos have killed hundreds of people in Africa – more than any other wild animal. Hippopotamus amphibius means “river horse.” Wild Animal Teeth Facts: The Hippo. 6 Amazing Facts About Hippopotamuses. 1. 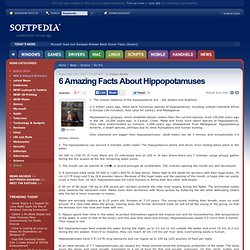 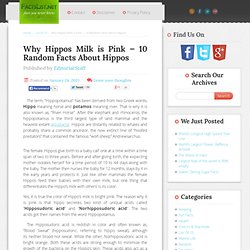 That is why it is also known as, “River Horse”. After the elephant and rhinoceros, the hippopotamus is the third largest type of land mammal and the heaviest extant artiodactyl. Hippos are distantly related to whales and probably share a common ancestor, the now extinct line of “hoofed predators” that contained the famous “wolf-sheep” Andrewsarchus. The female Hippos give birth to a baby calf one at a time within a time span of two to three years. Before and after giving birth, the expecting mother isolates herself for a time period of 10 to 44 days along with the baby. Blue heron. Herons. Great Blue Heron, Life History. Partial migrant. Great Blue Herons generally move away from the northern edge of their breeding range in winter, with some flying as far south as the Caribbean. Populations in the Pacific Northwest and south Florida are present year-round. Great Blue Herons aren’t likely to visit a typical backyard. However, they are sometimes unwelcome visitors to yards that include fish ponds.

A length of drain pipe placed in the pond can provide fish with a place to hide from feeding herons. Animal Facts. Grey Heron: Ardea cinerea Distribution: All over Great Britain from Ireland across to Europe, Asia, Japan & south to the Mediterranean. Also India and northern China, southern Africa, Indonesia. Birds in northern Europe migrate, wintering south of the Sahara. Habitat: Slow-moving streams and rivers, shallow lakes and sheltered seashores, damp fields, marshes and canals.

Description: Tall with long neck, long brown legs and long, yellow dagger-like beak. #10 10 Aberrant Avian Hunting and Feeding Methods. Animals Birds are among the more conspicuous species on Earth, allowing us the opportunity to closely observe their feeding habits, which at times rank among the strangest and most disturbing among animals. Herons have unique way of getting fish. Great Blue Herons, Great Blue Heron Pictures, Great Blue Heron Facts.

The tall, long-legged great blue heron is the most common and largest of North American herons. Great blue herons are waders, typically seen along coastlines, in marshes, or near the shores of ponds or streams. They are expert fishers. Herons snare their aquatic prey by walking slowly, or standing still for long periods of time and waiting for fish to come within range of their long necks and blade-like bills. The deathblow is delivered with a quick thrust of the sharp bill, and the prey is swallowed whole. Great blue herons have been known to choke to death by attempting to swallow fish too large for their long, S-shaped necks. Great blue herons' size (3.2 to 4.5 feet/1 to 1.4 meters) and wide wingspan (5.5 to 6.6 feet/1.7 to 2 meters) make them a joy to see in flight. 21 Facts about Grey Herons - All creatures.... - Wildlife. Crocodile. Crocodile.