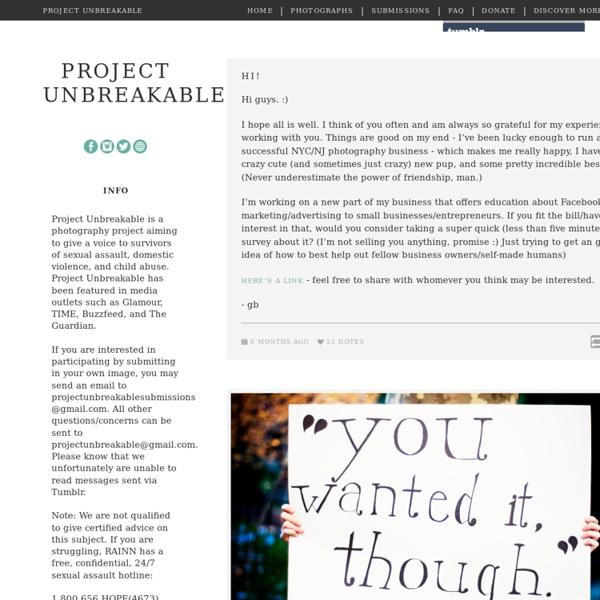 You may have noticed that Project Unbreakable has been pretty quiet lately. For a few months now, those of us at Unbreakable have been making some pretty big life changes, and we have had to figure out where Unbreakable is placed. It has been a very long and incredible journey, but we are saddened to say that we will be closing our doors. We will finish posting all the submissions we have, but after we run out, we are no longer going to be accepting submissions for the website (but everything will remain up – we aren’t deleting anything.) We hope you understand, and we are grateful for your support. A note from Grace: I can’t really sum up almost 4 years of doing this project and I am having a very difficult time writing this. I would be lying if I said that the rumors from other activists about my integrity didn’t get to me. But that is not why I am leaving the project. Please take care of yourselves. A note from Christina:

Ronald's Barbershop Elmhurst NYC Case study images for Interband's Singapore's redesign and branding of Banco De Oro's branches in Manila.Photography, Digital Photography2012 The declassified fashions of East German spies 3inShare Jump To Close For more than three years, German photographer Simon Menner has immersed himself in the invasive culture of the Stasi, the security service that snooped on East Germans for 40 years. PAINTING WITH LIGHT AND FIRE I’m going to get this out of the way right here in the beginning: none of these flashy, surreal photographs where Photoshopped. UK based light artist Ian Hobson, who humorously and humbly calls his work “Waving Torches at Things,” creates some of the best images we’ve ever seen in light painting. His newest works exude a flowing, painterly, yet digital aura, coloring the abandoned buildings he often uses as his art space with vibrant dashes and swooshes of light. His images are created using very long photographic exposures, capturing the paths of the home-made “torches” he waves before the camera. He uses everything from lightsaber like cathode light tubes, to LEDs and spinning strings of flaming wool.

Apollo 15 Map and Image Library No copyright is asserted for NASA photographs. If a recognizable person appears in a photo, use for commercial purposes may infringe a right of privacy or publicity. Photos may not be used to state or imply the endorsement by NASA or by any NASA employee of a commercial product, process or service, or used in any other manner that might mislead. Accordingly, it is requested that if a NASA photograph is used in advertising and other commercial promotion, layout and copy be submitted to NASA prior to release. Cameras Travel the World: Disposable Memory Project In 2008 British technical creative director, Matthew Knight, had a unique idea: start leaving disposable cameras out for the public with instructions to be picked up, used to capture a couple of pictures and then passed on to others. Called the Disposable Memory Project he was hopeful that this photography experiment would be successful. Would people use the cameras and pass them on? How far would the cameras travel? Would they be returned?

From The Loft Back soon Feb 12th, 2013 by admin From the loft is having a break. You can still access all of the previous posts. The Past in Color: Bringing Old Photographs to Life Did you ever stop to think that the black and white photographed world of the past actually occurred in color just like today? Sanna Dullaway, an artist from Sweden, gave us a glimpse of what this colorful world looked like. Dullaway took old, iconic pictures and colorized them using Photoshop. She cleaned up the photos and converted them from black and white to her own interpretation of what the colors may have looked like.

Pictures Taken Exactly At The Wrong Time July 21, 2009 | 45 Comments and 0 Reactions | Topics: LOLs , main Loading ... Other Stories You Might Like Photo Surgery: Fusing Faces (WITHOUT PHOTOSHOP) At a first glance, it would seem that the photographs of Bobby Neel Adams are just another Photoshop project, but they were actually done using a technique that the artist calls “photo surgery”. Adams has been using this photomontage method which involves altering pictures through “manual excision, collage, and sometimes defacing of the subject” since the late 80’s. He has used this practice in three of his most popular collections: Couples, Family Tree, and Age Maps. In the Age Maps Collection, Adams fuses a childhood photo with a current photo of the same person.

Photo Splicing The Family Genetics Have you ever wondered what parent you look more like? Whose eyes do you have, what about your nose, or your chin? Maybe you think you and your siblings look nothing alike. What better way to see your comparisons than a spliced photo of the two of you. Someone in your distant family that you’ve never met could share your same features. 50 Year Old Photos Transformed Into Surreal GIFs Designer and artist Cari Vander Yacht works for the well known advertising company Wieden+Kennedy by day… but by night she paints and works on experimental projects like this wonderfully surreal series “TGIMGIF” (Thank God It’s Monday’s Graphics Interchange Format). Wanna make these images extra poppin? Play this track while you do your viewing: Thanks to Cari Vander Yacht. More TGIMGIF here.

Breaking The Fifth Wall: Visual Essay On Our Perception Yovcho Gorchev not only completed a masters in architecture, but a masters in film design as well. These combined interests of design and film have led him to become a narrative driven, mixed media artist. His latest endeavor, Breaking The Fifth Wall, entails Gorchev creating mind-blowing images in the GIF platform and using them to posit new theories of human perception, the diminishing value of physical space, and sensory experiments of a metaphysical nature. As an artist, Yovcho is inspired by characters, spaces, systems and atmospheres navigated through surreal scenarios and unlikely narratives. He is inspired by the dreamlike landscape of the mind, and the narratives formed by those parts of life we are not always aware of being present.

Landscape Photography Melts into Color Fields See Also An Entire Film in One Frame: Movie Bar Code Schlaug has been exhibiting his work since way back in 1982. The photographs we bring you here are atypical of his normal series’: he rarely uses digital methods in his work. Over the years his subjects have revolved around capturing architecture and his travels centered mainly in sunny Spain. The body of work has a straight forward honesty that allows the subjects to largely speak for themselves, un-burdened by stylistic messages from the artist.