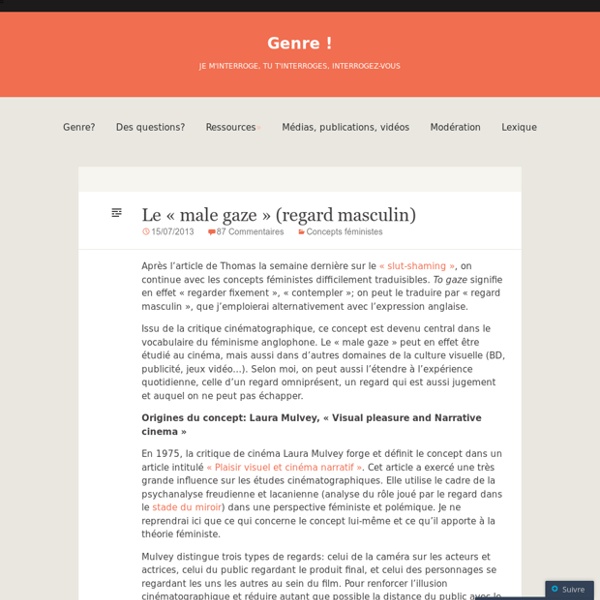 Princess Leia: Feminist Icon or Sexist Trope? Originally published at Bitch Flicks as part of their Women in Science Fiction Week. When I was a young girl, Star Wars was my favorite movie. I’ve watched it more times than any other film. Premiering in 1977, the same year I was born, the epic sci-fi space opera irrevocably changed the movie industry. Beyond battle scenes, or the twist of Vader being Luke’s father, it impacted my childhood. Because Princess Leia was my idol. <i>On female body experience: "Throwing like a girl" and other essays</i> In lieu of an abstract, here is a brief excerpt of the content: Although women have made great strides, Iris Marion Young maintains that "the image of the woman has not ceased being that of the Other" (3). Women's actions and opportunities continue to be constrained by sex- and gender-specific roles and too often, women's voices are rendered inaudible. Accordingly, On Female Body Experience: "Throwing Like a Girl" and Other Essays investigates different aspects of women's lived bodily experiences. The essays, spanning over two decades of Young's insightful and original scholarship, aim to expose the tensions between the social norms that invest the female body and women's lived experiences. Of particular note is Young's ability to speak to a diverse group of readers.

The Effects Of Negative Emotions On Our Health Humans experience an array of emotions, anything from happiness, to sadness to extreme joy and depression. Each one of these emotions creates a different feeling within the body. After all, our body releases different chemicals when we experience various things that make us happy and each chemical works to create a different environment within the body. For example if your brain releases serotonin, dopamine or oxytocin, you will feel good and happy. Picking and Choosing from the "Act Like a Man Box" One of the difficulties that those of us who are looking to challenge the Act Like a Man Box (see my post The Performance of Masculinity for an explanation of that, if you aren’t familiar with it) is that the Box itself gets in the way. My observation is that’s because “believes in the Box” is inside the Box, so when a man starts to question it, the guys in the Box immediately perceive him to be outside it and dismiss anything he says about it. On the other hand, I’ve also seen a lot of men who want to break out of the Box do so by rejecting everything inside it. I’ll come out of the closet here and admit that for a few years, I was a Sensitive New Age Guy. I never liked watching or talking about sports and I’ve always been more attuned to my feelings than most men seemed to be, so it was pretty easy to do.

Linda Williams (film scholar) Linda Williams (born December 18, 1946) is a professor of film studies in the departments of Film Studies and Rhetoric at University of California, Berkeley. Williams graduated from University of California, Berkeley with a B.A in Comparative Literature in 1969, and then gained a PhD at the University of Colorado for her dissertation subsequently published as Figures of Desire: A Theory and Analysis of Surrealist Film.[1] Her main academic areas of interest are; film history, film genre, melodrama, pornography, feminist theory and visual culture; all with an emphasis on women, gender, race, and sexuality.[1] With respect to film genres, she argues that horror, melodrama, and pornography all fall into the category of "body genres", since they are each designed to elicit physical reactions on the part of viewers.

Tina Fey Summed Up Kim Kardashian's Nude Photo Shoot 3 Years Before It Even Happened No, Tina Fey isn't clairvoyant, but she did hint at why so many of us can't take our eyes off of Kim Kardashian's recent nude photo shoot with Paper Magazine in her book Bossypants three years ago. As Twitter user Ryan Nelson pointed out on Nov. 13, Tina Fey briefly discussed Kim K's booty in her best-selling memoir Bossypants and summed up why we're all so enamored with it better than any blog, think piece or news article has in the last three days. If you're reading this on a mobile device, here's the full text:

Personality and Social Dynamics Lab Personality and Social Dynamics Lab | Sanjay Srivastava Home I have created this page to address a few of the more common nuts-and-bolts questions people have about measuring the Big Five. I have written this page in a fairly informal style, and I have not attempted to be comprehensive. For a fuller treatment of measurement and theoretical issues, I recommend that you look at the 2008 Handbook of Personality chapter by Oliver John, Laura Naumann, and Chris Soto (which is a revision of a 1999 Handbook chapter that Oliver and I wrote, which in turn is a revision of a 1990 chapter by Oliver). (Note: This page was written to help researchers who want to measure the Big Five as part of their research programs. Ohio Class Teaches Children that Men Think and Women Feel From Reddit comes the story of an assignment given to high school students in a sex education unit of health class in Columbus, Ohio (as reported in theDispatch). The introduction reads (typos included): Appreciating Gender Differences: Often there are many stereotypes attached to being male or female.

7 Ways Women and Girls Are Stereotyped, Sexualized, and Underrepresented on Screen It's no big revelation that women and minority actors have long struggled to land prominent roles in big-budget Hollywood fare. And entertainment and media's oversexualization of women (even in Olympics coverage) has always been pretty damn bald-faced. But how about kids' TV shows, or family movies? The Geena Davis Institute on Gender in Media (founded in 2004 by the Oscar-winning actress and United Nations special envoy) has published a new report (PDF) detailing the stereotypes, barriers, and straight-up exploitation that still define how badly women and girls are treated on screen.

‘Mad Max': Fury Road Is a Fun Movie. It’s a Solid Action Flick. But Is It Feminist™? This guess post by Rebecca Cohen previously appeared at Rebecca’s Random Crap and is cross-posted with permission. Many who devote ourselves to the struggle for gender equality want claim this movie as our own. Others have said feminists need to demand more from our entertainment than Mad Max: Fury Road actually delivers. To end violence against women: Challenge a culture of sexual objectification - Collective Shout When it comes to violence against women, sexual objectification is the missing puzzle piece; Collective Shout makes this equation whole. On the ‘International Day for the Elimination of Violence Against Women’ it is important to reflect on the ongoing sexist violence, as well as the campaigns to end it. Violence against women is on the rise in a number of countries around the world.

4 Things to Remember When Fear is Holding You Back Tara, wow! Beaitifully written, powerful, thank you for sharing, and blessed be…xo I only wish I learned all this about fears a few months back. I have been able to recognize, but only recently, how much fear is holding me back. And as of just 2 weeks ago, I began making my plan of moving forward. FYI, this will be lengthy, but I hope this helps even just one orher parent out there….