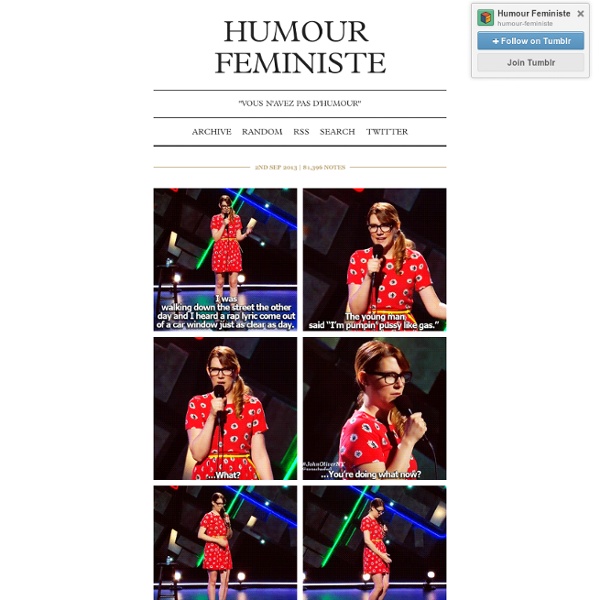 MISANDRY artxygrunge asked: as a feminist who believes in equality you are a fucking abortion to society. i would LOVE to push you down a flight of stairs you cunty, uncultured fuck stick. feminism isn't about degrading men to push women to the top, it's about equality you fucking elitist dipshit. kys lmao. 76 notes Tags: misandrist answers artxygrunge Anonymous asked: i was venting to my grandma about how sucky men are & she was like i'm gonna let you in on a secret: men are assholes, no matter how far back you go. they always have been. don't marry an old white man. be a lesbian. 133 notes Tags: misandrist answers your grandma is as cool as sophia in sunglasses Anonymous

I hate Strong Female Characters I hate Strong Female Characters. As someone spends a fair amount of time complaining on the internet that there aren’t enough female heroes out there, this may seem a strange and out of character thing to say. And of course, I love all sorts of female characters who exhibit great resilience and courage. I love it when Angel asks Buffy what’s left when he takes away her weapons and her friends and she grabs his sword between her palms and says “Me”. In Crouching Tiger, Hidden Dragon, I love Zhang Ziyi’s Jen sneering “He is my defeated foe” when asked if she’s related to Chow Yun-Fat's Li Mu Bai. Jayco Seneca 35' Jayco Seneca 35' Step onboard our thirty-five foot Jayco Seneca and you can almost feel the power even before you start the big diesel engine. This coach has such a beefy feel to it, you'll know right away that it is the coach for your trip out camping. This coach is built for the outdoors. Two slides inside will give you so much living space, and four beds for sleeping, that even with a full crew onboard, you'll have plenty of room. Large water and tank capacities will give you lots of time in the outdoors before you have to come back and 're-supply'.

~ @Livable4All - Housework Under Capitalism Housework Under Capitalism by C. A. L'Hirondelle written March 2000, revised March 2005 ShareThis (A shortened version of this article was published in the U.S. magazine "Off Our Backs" in Jan/Feb 2004) 15 Rape Jokes That Work Lindy West, Jessica Valenti, and Jonnie Marbles have already written everything I would have to say, and quite a bit more, about the latest Daniel Tosh rape joke controversy. So here’s what I have to add to the conversation: an even longer list (including some mentioned by Lindy, Jessica, and Jonnie) of rape jokes that work as jokes–which is to say, A) they’re constructed so that rape victims are not the butt of the joke, and B) they made me laugh. Emphasis on the “me” there. Not everyone’s going to agree, and some people are going to think I’m a bad feminist, which, what else is new. But I want to be able to link to this post in the future, when this happens again–because it always does–and hordes of young men start screaming–because they always do–that feminists are trying to take all the funny out of comedy AGAIN. I am a feminist.

Women Fighters In Reasonable Armor Here’s a suggestion for reasonable armour in a more modern sense. She’s a soldier of IDS, a vicious PMC seeking to conquer a post-apocalyptic world in Advance Wars: Days of Ruin. I like it, very PMC-y. Thanks :) Voyeur: Adorn Me: The Fetish Wardrobe: Developing A Fetish Wardrobe On A Budget My friend Cameron is a thoughtful and thinking Dominant, but ever since I've knowing him he's shown up at scene events in the standard black suit, pepped up with a string tie. Did he look good? Sure he did. Did he look fetish? Not in the slightest. A few months ago I commented to him that I thought it was about time he started dressing with a little more liveliness. How I Stopped Letting a Man Tell Me My Body Was "Too Wrinkled" For Him Originally published on The Huffington Post and cross-posted here with their permission. Naked, I stood at the closet doors with the lights on and made myself ready. I took a deep breath and positioned the mirrors so I could see all of me.

Your Guide to 'Not All Men,' the Best Meme on the Internet While I understand the place where this comes from (people hate being stereotyped even as they stereotype others), I think people miss the goddamn point: it doesn't matter if not all of group x or y does a or b. If you are not guilty of said action, then it doesn't apply to you. So, not all ____ people are racist against ____ people. If the topic of that is brought up, and you chime in with, "OMG BUT NOT ALL!" then you're not really contributing to the conversation. Things We Don't Talk About Share on Tumblr Things We Don’t Talk About: Woman’s Stories from the Red Tent is a groundbreaking 72-minute documentary film by award winning filmmaker Dr. Isadora Gabrielle Leidenfrost. Spontaneous and organic, a Red Tent is a red textile space where women gather to rest, renew, and often share deep and powerful stories about their lives.

Athamax 25th Oct 2014 | 416 notes (via letmedothis) 25th Oct 2014 | 679 notes (via redsnapper921) 25th Oct 2014 | 7 592 notes Dear Feminists: I'm One of You! Please Don't "Save" Me As feminism becomes more mainstream, there’s been a great deal of discourse online regarding different cultural perspectives for various feminist issues. The more I read through these discussions, the more I become aware of a trend among feminists, which is the idea that a Western society is the ideal that other cultures should strive to duplicate. “Why does your culture do that?” “Your culture is so backwards.”