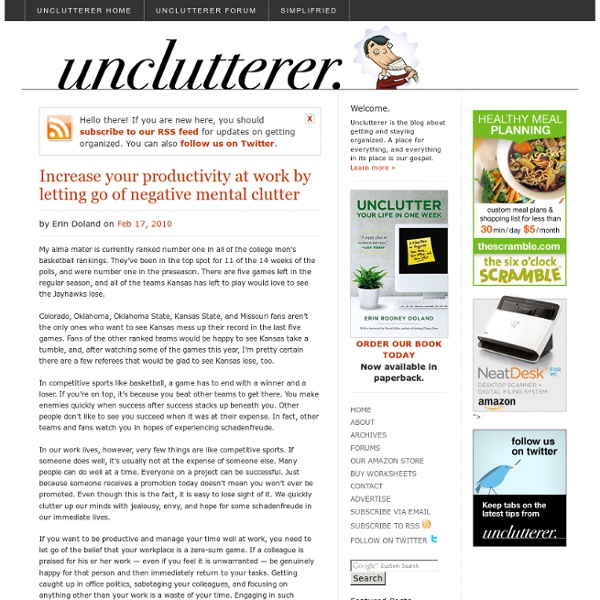 My alma mater is currently ranked number one in all of the college men’s basketball rankings. They’ve been in the top spot for 11 of the 14 weeks of the polls, and were number one in the preseason. There are five games left in the regular season, and all of the teams Kansas has left to play would love to see the Jayhawks lose. Colorado, Oklahoma, Oklahoma State, Kansas State, and Missouri fans aren’t the only ones who want to see Kansas mess up their record in the last five games. Fans of the other ranked teams would be happy to see Kansas take a tumble, and, after watching some of the games this year, I’m pretty certain there are a few referees that would be glad to see Kansas lose, too. In competitive sports like basketball, a game has to end with a winner and a loser. In our work lives, however, very few things are like competitive sports. If you want to be productive and manage your time well at work, you need to let go of the belief that your workplace is a zero-sum game.

7 Secrets of the Super Organized A few years ago, my life was a mess. So was my house, my desk, my mind. Then I learned, one by one, a few habits that got me completely organized. 13 Things to Avoid When Changing Habits “Habit is habit, and not to be flung out of the window by any man, but coaxed downstairs a step at a time.” - Mark Twain Post written by Leo Babauta. Follow me on Twitter. I’ve learned a lot about changing habits in the last 2 1/2 years, from quitting smoking to taking up running and GTD and vegetarianism and waking early and all that. I could go on, of course, but you get the picture. I’ve not only learned a lot about what you should do when changing habits, but through my failures, I’ve learned about what not to do.

33 Rules to Boost Your Productivity Heuristics are rules intended to help you solve problems. When a problem is large or complex, and the optimal solution is unclear, applying a heuristic allows you to begin making progress towards a solution even though you can’t visualize the entire path from your starting point. Suppose your goal is to climb to the peak of a mountain, but there’s no trail to follow. 10 Ways History’s Finest Kept Their Focus at Work Post written by Albert van Zyl from the blog HeadSpace. The lives of great people give us interesting clues about how to organise our days. All of them attached great value to their daily routines. This is because they saw it as being part of ‘becoming who they are’, as Nietzsche puts it.

Minimal ZTD: The Simplest System Possible Post written by Leo Babauta. Follow me on Twitter. Recently I posted my new twist on the excellent GTD system, Zen To Done (ZTD): The Ultimate Simple Productivity System. However, reader Mark Siegal said that the system seems to complex. So I now present the minimalist version of ZTD — a way to be productive without all the fuss. How to Get Anything Done Let’s say you had a baby. Congratulations! Your baby is the best human ever! You love your baby. You celebrate as it starts to crawl. You and your partner delight in this baby’s every new adventure.

6 Ways To Build A Better Team Tim Wright On May 5, 2014 Every company wants increasing employee engagement. Engaged employees are good at communicating and putting forth extra effort to fulfill expectations. I’ve recently seen articles about student athletes becoming great employees. The Little Book of Procrastination Remedies Post written by Leo Babauta. Procrastination is one of those topics that, it seems, I can’t write enough about. There isn’t a person among us who doesn’t procrastinate, and that’s a fact of life. It’s deep within us. We think we’re going to do something later, or read that classic novel later, or learn French later.

On Piketty and definitions. ‘Financial capital’ is not the same thing as ‘physical capital’ (two graphs) The discussion about Piketty is getting messed up. The vagueness of economic parlance allows people to accuse him of mistakes he doesn’t make. The meaning of the word ‘capital’ is a case in point. Develop Routines At Home - Stepcase Lifehack If you’re trying to do anything productively a system, and at some stage a routine, should be set. This is important for everything working from home or elsewhere. When you’re home all day and don’t have routines in place your day may become a shamble with nothing getting done properly. Likewise, if you return home after work to a list of jobs and no order or routine, it may be difficult to even get started. Unclutterer has some examples for different job routines around the house that will make life easier.

11 Ways to Cure Someday Syndrome Editor’s note: This is a guest post from Alex Fayle of the Someday Syndrome blog. Someday Syndrome: not doing what you want to because you don’t know what it is, because you’re procrastinating about it, or because you have too much stuff getting in your way. Everyone suffers from Someday Syndrome at some point in their lives, often catching it repeatedly. For me, most recently, I’d been saying that I really should give running a try without doing anything about it. You probably have something similar going on in your life – a project, a task, a goal – that you just haven’t got around to doing yet. Right? Microsoft PowerPoint Templates and Backgrounds That's why we deliver only the very best premium PowerPoint templates to suit every need. From athletics to science and from people to religion, we offer the most comprehensive and usable database of Microsoft PowerPoint backgrounds you'll find anywhere on the web. Free PowerPoint themes for every person and every business

Romance World - Chi's Sweet Home This is cute anime, Chi is so cute ^^I want a kitten like Chi ^__^ But every eps is so short, only like 3 min, and there are like 100 eps total. Chi's Sweet Home (チーズスイートホーム, chīzu suīto hōmu?) is a manga series written and illustrated by Konami Kanata.

Related:
Related:  productivity   -  creativity and innovation   -  10 Ways History’s Finest Kept Their Focus at Work   -  Lesson Plan for Making a Speaker Laboratory   -  Foodbeast | Food News.   -  The Different Types of Pasta: What Kind is on my Plate?   -  Discover, Evaluate, and Shop with the Gadget Experts at Retrevo   -  Davison Creators - Dedicated to inspiring designers, inventors & the creative spirit in all of us.   -  How to Make a Web Site: The Complete Beginner's Guide   -  Your Writer's Workshop : Become a writer. Online writing workshop for writing books, creative writing and writing help.   -  Portal:Thinking - Wikipedia, the free encyclopedia   -  Our Games Archive - Choice of Games LLC   -  FREE Guide to All Government Grants, Scholarships and Loans for Students (Fedmoney.org)   -  Forums | National Novel Writing Month   -  How to Make, Print, and Bind Your Own Books   -  How do you craft an exceptional life? - Positive Thoughts   -  404 - Not Found   -  Top 10 Pro Tips and Tools for Budding Web Developers and Designers   -  15 Ways to Live, and Not Merely Exist   -  BrowserQuest   -  Chasing Delicious | Kitchen 101: Cooking Methods   -  Butterbeer III Recipe - Allrecipes.com   -  MIT Creates Amazing UI From Levitating Orbs | Co.Design | business + design   -  Focus Your Ambitions with the Lifehacker Hierarchy of Goals   -  Responsify.it - A responsive template generator   -  Chasing Delicious | Kitchen 101: Fruits, Vegetables & Herbs   -  Confessions of a Recovering Lifehacker   -  Cinemagraphs: Images that come alive - Socialphy   -  How To Stay Productive After Work   -  Watch "Phil Hansen: The art of the imperfect" Video at TED2013 #TEDTalentSearch   -  99U - Empowering the Creative Community   -  How Our Brains Stop Us From Achieving Our Goals (and How to Fight Back)   -  Henry Miller on Reading, Influence, and What’s Wrong with Education | Brain Pickings   -  Aerial Data Visualisation Reveals Life In The United States | The Roosevelts   -  24 Incredibly Simple Ways To Make Your Food Taste Awesome   -  How to Run Mac OS X Inside Windows Using VirtualBox   -  kitchencheatsheet.gif (GIF Image, 900 × 5870 pixels) - Scaled (17%)