Henry Miller on Reading, Influence, and What's Wrong with Education 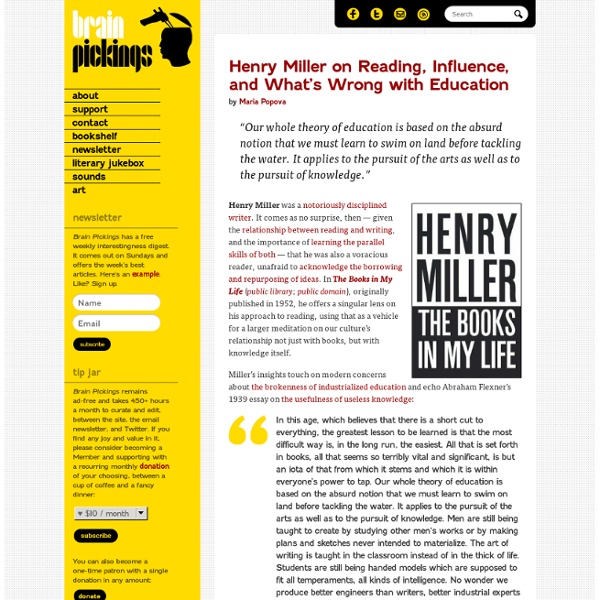 The Social Era Is More Than Social Media Editor's Note: This story contains one of our 11 New Years resolutions you can actually keep in 2014. For the full list, click here. Things we once considered opposing forces--doing right by people and delivering results, collaborating and keeping focus, having a social purpose and making money--are really not in opposition. Here are the social-era rules that allow both people and institutions to thrive: 1. The social era will reward those organizations that realize they don't create value all by themselves. 2. Power used to come largely through and from big institutions. 3. Organizations that "let go at the top"--forsaking proprietary claims and avoiding hierarchy--are agile, flexible, and poised to leap from opportunity to opportunity, sacrificing short-term payoffs for long-term prosperity. 4. The foundational element starts with celebrating each human and, more specifically, something I've termed onlyness. 5. 6. 7. 8. 9. 10. 11. Don't assume any set of rules is fully baked.

William Gibson on Twitter, Antique Watches and Internet Obsessions | Underwire For William Gibson, Twitter has taken the place of his previous obsession with antique watches.Photo: Jason Redmond/Wired William Gibson once spent nearly five years studying the complexities of watchmaking, indulging in the accumulation of knowledge for its own sake. “I wanted to grow my own otaku-like obsession,” he said in a phone interview with Wired. These days, the author — whose books, beginning with 1984 classic Neuromancer, invented imaginary worlds that seem strangely in tune with our present-day reality — says he has no real obsession. But the spare time he used to spend studying antique timepieces now gets spent on Twitter. In Part 2 of the Wired interview, one of science fiction’s most singular voices — and one of its most compelling thinkers — discusses the internet, social media, his fascination with antique watches and punk rock, and his fear of nostalgia. Wired: You’ve had some interesting thoughts about social media.

The Role of Intuition and Imagination in Scientific Discovery and Creativity: A 1957 Guide by Maria Popova “Those who do not know the torment of the unknown cannot have the joy of discovery.” Last week, we took in some timeless vintage wisdom on the role of serendipity and chance-opportunism in creativity and scientific discovery, culled from the 1957 gem The Art of Scientific Investigation (public library; public domain) by Cambridge University animal pathology professor W. I. B. Today, as promised, we revisit Beveridge’s hefty tome to examine his ideas on the role of intuition and the imagination. Beveridge cites philosopher, psychologist, and educational reformer John Dewey‘s seminal 1933 book, How We Think, outlining Dewey’s model for conscious thinking: First we become aware of the difficulty or problem, which provides the stimulus; then, a suggested solution pops into the conscious mind; finally, a reason evaluates the idea to reject or accept it — if the idea is rejected, the mind goes back to the previous step and repeats. Indeed, Einstein himself put it thusly:

15 Ways to Live, and Not Merely Exist post written by: Marc Chernoff Email As Jack London once said, “The proper function of man is to live, not to exist.” Far too often we travel through life on autopilot, going through the motions, accepting what is, and having every day pass like the one before it. Everything seems relatively normal and comfortable, except that constant twitch in the back of your mind that’s saying, “It’s time to make some changes.” Here are 15 simple suggestions for those who want to break free from the mold and truly live more of their life – to experience it and enjoy it to the fullest, instead of settling for a mere existence. Appreciate the great people and things in your life. – Sometimes we don’t notice the things others do for us until they stop doing them. Photo by: Toni Blay If you enjoyed this article, check out our new best-selling book. And get inspiring life tips and quotes in your inbox (it's free)...

Marfa, Texas: An Unlikely Art Oasis In A Desert Town hide captionIn the 1970s, minimalist artist Donald Judd moved to Marfa, Texas, where he created giant works of art that bask beneath vast desert skies. In the years since, Marfa has emerged as a hot spot for art tourism. Art (c) Judd Foundation/Licensed by VAGA, New York, NY This tiny town perched on the high plains of the Chihuahua desert is nothing less than an arts world station of the cross, like Art Basel in Miami, or Documenta in Germany. It's a blue-chip arts destination for the sort of glamorous scenesters who visit Amsterdam for the Rijksmuseum and the drugs. hide captionThough the locals have mixed feelings about being an art mecca, Kaki Aufdengarten-Scott, Marfa's one-woman chamber of commerce, says without art tourism, "this town would have dried up and blown away." Citoyen du Monde Inc/Flickr "They speak about Marfa with the same kind of reverent tones generally reserved for the pilgrimage of the Virgin of Lourdes," notes Carolina Miranda, a writer who covers the art world.

Tiny Collaborative Stories by Maria Popova A charmingly minimalist cross-pollination of word and image at the heart of being human. Last year, Joseph Gordon-Levitt, better-known as RegularJOE in the hitRECord universe he created, asked thousands of contributors to submit tiny stories through words and images. He sifted through more than 8,000 submissions to cull 67 contributions, which were then collected in The Tiny Book of Tiny Stories: Volume 1. The hitRECord crew is now back with The Tiny Book of Tiny Stories: Volume 2 — a delightful compilation of 62 such tender, poignant, beautiful micro-narratives selected from nearly 15,000 submissions. All the stories are made collaboratively — a writer would submit a story to the site, then an artist who likes it would illustrate it, or vice-versa, then others would join in and remix the stories and artwork. In a heartening twist on traditional publishing, hitRECord is splitting all proceeds from the book 50-50 with the contributing artists and writers. Donating = Loving

Tarkovsky Films Now Free Online Andrei Tarkovsky (1932-1986) firmly positioned himself as the finest Soviet director of the post-War period. But his influence extended well beyond the Soviet Union. The Cahiers du cinéma consistently ranked his films on their top ten annual lists. Shot between 1962 and 1986, Tarkovsky's seven feature films often grapple with metaphysical and spiritual themes, using a distinctive cinematic style. You can now watch Tarkovsky's films online – for free. NOTE: If you access the films via YouTube, be sure to click "CC" at the bottom of the videos to access the subtitles. Ivan's Childhood - Web - Buy DVD (1962)Andrei Rublev - Part 1 - Part 2 - Buy DVD (1966)Solaris - Part 1 - Part 2 - Buy DVD (1972)The Mirror - Web - Buy DVD (1975)Stalker - Web - Buy DVD (1979) Would you like to support the mission of Open Culture? Also consider following Open Culture on Facebook and Twitter and sharing intelligent media with your friends. Related Content:

10 Rules for Students and Teachers (and Life) by John Cage and Sister Corita Kent by Maria Popova “Nothing is a mistake. There’s no win and no fail, there’s only make.” Buried in various corners of the web is a beautiful and poignant list titled Some Rules for Students and Teachers, attributed to John Cage, who passed away twenty years ago this week. The list, which can be found in Sister Corita’s Learning by Heart: Teachings to Free the Creative Spirit (public library), touches on a number of previously discussed themes and materials, including Bertrand Russell’s 10 commandments of teaching, the importance of embracing uncertainty, the pivotal role of work ethic, the intricate osmosis between intuition and intellect, and the crucial habit of being fully awake to everything. RULE ONE: Find a place you trust, and then try trusting it for awhile.RULE TWO: General duties of a student — pull everything out of your teacher; pull everything out of your fellow students.RULE THREE: General duties of a teacher — pull everything out of your students. Donating = Loving

How to Find Your Purpose and Do What You Love “Find something more important than you are,” philosopher Dan Dennett once said in discussing the secret of happiness, “and dedicate your life to it.” But how, exactly, do we find that? Surely, it isn’t by luck. I myself am a firm believer in the power of curiosity and choice as the engine of fulfillment, but precisely how you arrive at your true calling is an intricate and highly individual dance of discovery. Still, there are certain factors — certain choices — that make it easier. Every few months, I rediscover and redevour Y-Combinator founder Paul Graham’s fantastic 2006 article, How to Do What You Love. What you should not do, I think, is worry about the opinion of anyone beyond your friends. More of Graham’s wisdom on how to find meaning and make wealth can be found in Hackers & Painters: Big Ideas from the Computer Age. Alain de Botton, modern philosopher and creator of the “literary self-help genre”, is a keen observer of the paradoxes and delusions of our cultural conceits.

What can Diane Arbus teach you about writing? I always thought of photography as a naughty thing to do - that was one of my favorite things about it, and when I first did it, I felt very perverse. -- Diane Arbus Diane Arbus (1923-1971) was an American photographer and a student of human diversity, often described as a "photographer of freaks." Maybe one should admit that freakishness comes from within and 'normal' is a mirage. Join me now, fellow freak, and let us contemplate the normalness of strangehood. *Or normalhood of strangeness. Fur: An Imaginary Portrait of Diane Arbus (2006), starring Nicole Kidman, paints Diane as little more than a dissatisfied housewife who takes up photography to the detriment of her husband's serious -- if uninspired -- professional efforts. Curiously enough, for a movie that champions the discovery of your true self, Fur is not a little patronizing to the main character. Pfaugh. Diane did not orbit Allan like some apathetic satellite. Who was the real Diane? The year was 1923. 1929.

Maira Kalman on Identity, Happiness, and Existence by Maria Popova “How are we so optimistic, so careful not to trip and yet do trip, and then get up and say OK?” In this wonderful short video, Maira Kalman — the remarkable artist, prolific author, unmatched storyteller, and one of my favorite hearts and minds in the world — shares some wisdom on identity, happiness, and existence. Watch and take notes. The idea that you’d have to say ‘goodbye’ to all this — even though it’s infuriating and maddening and frightening and horrible, some of the time — is even more infuriating and maddening and horrible: How do you spend this time without perpetually being so broken-hearted about saying the eventual goodbye? I usually say, in the end, okay, it’s love and it’s work — what else could there possibly be? Speaking to the fluidity of character and the myth of fixed personality, Kalman observes: How do you know who you are? Here are some of the beautiful, poignant quotes Kalman reads and shows from her published works. How do you know who you are?

Live an Exceptional Life - Robin Sharma How do you craft an exceptional life? Ultimately, life goes by in a blink. And too many people live the same year 80 times. Exercise daily.Get serious about gratitude.See your work as a craft.Expect the best and prepare for the worst.Keep a journal.Read The Autobiography of Benjamin Franklin.