Thoughts and people on being creative and innovative 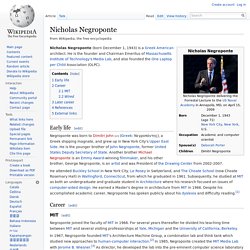 He is the founder and Chairman Emeritus of Massachusetts Institute of Technology's Media Lab, and also founded the One Laptop per Child Association (OLPC). Early life[edit] Negroponte was born to Dimitri John (el) (Greek: Νεγροπόντης), a Greek shipping magnate, and grew up in New York City's Upper East Side. He is the younger brother of John Negroponte, former United States Deputy Secretary of State. Another brother Michael Negroponte is an Emmy Award-winning filmmaker, and his other brother, George Negroponte, is an artist and was President of the Drawing Center from 2002-2007. Career[edit] MIT[edit] Negroponte joined the faculty of MIT in 1966. In 1967, Negroponte founded MIT's Architecture Machine Group, a combination lab and think tank which studied new approaches to human-computer interaction.[2] In 1985, Negroponte created the MIT Media Lab with Jerome B. 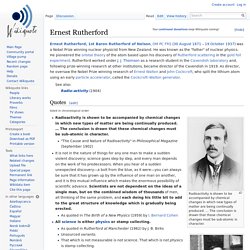 He was known as the "father" of nuclear physics. He pioneered the orbital theory of the atom based upon his discovery of Rutherford scattering in the gold foil experiment. Rutherford worked under J. J. Thomson as a research student in the Cavendish laboratory and, following prize-winning research at other institutions, became director of the Cavendish in 1919. See also: Radio-activity (1904) Quotes[edit] listed in chronological order Radioactivity is shown to be accompanied by chemical changes in which new types of matter are being continually produced. … The conclusion is drawn that these chemical changes must be sub-atomic in character. An alleged scientific discovery has no merit unless it can be explained to a barmaid. Quotes about Rutherford[edit] External links[edit] Wikisource has original works written by or about: 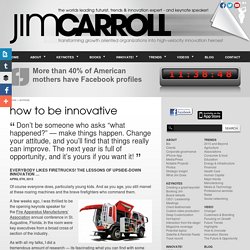 And as you age, you still marvel at these roaring machines and the brave firefighters who command them. A few weeks ago, I was thrilled to be the opening keynote speaker for the Fire Apparatus Manufacturers’ Association annual conference in St. Augustine, Florida. In the room were key executives from a broad cross of section of the industry. As with all my talks, I did a tremendous amount of research — its fascinating what you can find with some very targeted searching and analysis. What I learned from this industry is the perfect allegory for what is now happening in most major industries — the acceleration of what is known as customer-focused, or better yet, customer-initiated innovation. For as long as there have been firetrucks, the industry has operated pretty well much the same. But what is also apparent is that the entire fire and safety industry is grappling with faster change, such as: Albert Einstein - Wikiquote. A hundred times every day I remind myself that my inner and outer life are based on the labors of other men, living and dead, and that I must exert myself in order to give in the same measure as I have received and am still receiving... 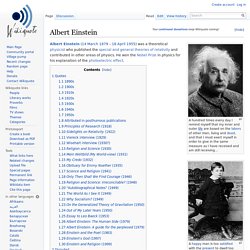 Albert Einstein (14 March 1879 – 18 April 1955) was a theoretical physicist who published the special and general theories of relativity and contributed in other areas of physics. He won the Nobel Prize in physics for his explanation of the photoelectric effect. Quotes[edit] 1890s[edit] Un homme heureux est trop content de la présence pour penser beaucoup à l'avenir.A happy man is too satisfied with the present to dwell too much on the future.From "Mes Projets d'Avenir", a French essay written at age 17 for a school exam (18 September 1896).

Louis Pasteur - Wikiquote. Louis Pasteur (27 December 1822 – 28 September 1895) French microbiologist, chemist, pioneer of the "Germ theory of disease", discoverer of molecular asymmetry and stereo-chemistry, and inventor of the process of Pasteurization. 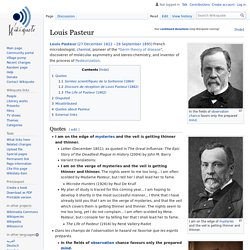