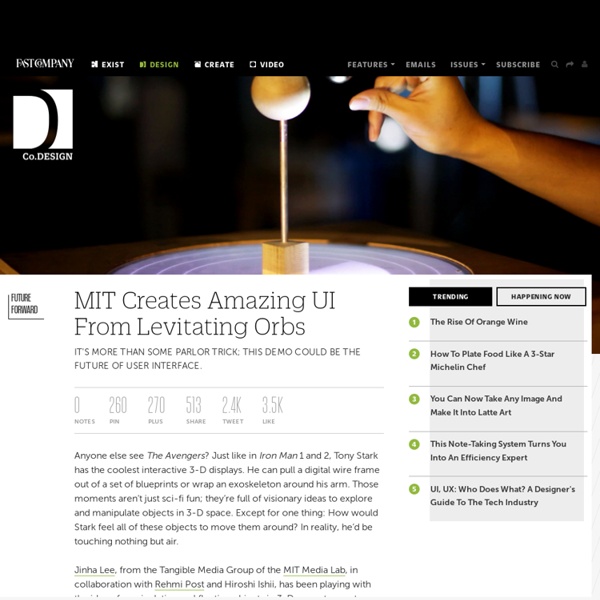 Anyone else see The Avengers? Just like in Iron Man 1 and 2, Tony Stark has the coolest interactive 3-D displays. He can pull a digital wire frame out of a set of blueprints or wrap an exoskeleton around his arm. Those moments aren’t just sci-fi fun; they’re full of visionary ideas to explore and manipulate objects in 3-D space. Except for one thing: How would Stark feel all of these objects to move them around? In reality, he’d be touching nothing but air. Jinha Lee, from the Tangible Media Group of the MIT Media Lab, in collaboration with Rehmi Post and Hiroshi Ishii, has been playing with the idea of manipulating real floating objects in 3-D space to create a truly tactile user interface. It’s essentially a small field in which gravity doesn’t overcome an object. “There is something fundamental behind motivations to liberate physical matter from gravity and enable control. Interviewing Lee, I realized he’s one-part scientist, one-part philosopher. [Hat tip: designboom]

This Gizmo Lets You Draw A UI On Paper, Then Turns It Into A Touch Screen You know those huge multichannel mixers--the massive boards that audio engineers manage during concerts to control everything from sound to lights? It’s the sort of highly specialized hardware that the average person would never come into contact with, because why would they? But what if you could just draw it? That’s the idea behind the SketchSynth, by Carnegie Mellon student Billy Keyes. It allows you to draw your own specialized piece of sound hardware--in this case, a MIDI board--on any random piece of paper. “Ever since I was little, I’ve been fascinated by control panels,” Keyes explains on his blog.

Is this the future of Project Glass? – Cell Phones & Mobile Device Technology News & Updates Wearable technology, and computing equipment that acts more like another limb then a gadget, has gotten a lot of attention recently thanks to Google . Project Glass made a big splash not too long ago at Google’s annual developer conference when they showed several users falling on to the Moscone West in San Francisco. Google’s pretty bent on showing us the sharing possibilities with Project Glass, but it feels like in time that technology could become a ubiquitous part of our lives. Fortunately for those of us who lack a hyperactive imagination, a short film popped up recently that can help fill in the blanks. I love the world that was created in this film, and how it was all made possible by wearable tech.

How Do You Create A Culture Of Innovation? This is the third part in a series by Scott Anthony, author of The Little Black Book Of Innovation. It sounds so seductive: a “culture of innovation.” The three words immediately conjure up images of innovation savants like 3M, Pixar, Apple, and Google--the sorts of places where innovation isn’t an unnatural act, but part of the very fabric of a company. It seems a panacea to many companies that struggle with innovation. But what exactly is a culture of innovation, and how does a company build it? While culture is a complicated cocktail, four ingredients propel an organization forward: the right people, appropriate rewards and incentives, a common language, and leadership role-modeling.

SOEmote implants your facial expressions, movement, and voice onto your EQ2 avatar The future is here and it's full of Ratonga. SOE is adding new facial recognition tech to EverQuest 2 that lets the game track your movement and facial expressions and replicate them on your avatar in real-time. Voice chat is also built into the feature so that your character will animate naturally while you talk. We have a full demo video of the tech below, and the inside scoop on how it works and why the devs think MMO players will love it from EQ2's Director of Development David Georgeson and the CEO of the company that developed the technology, Robert Gehorsam. PCG: Aside from it being cool future-sci-fi-world technology, why is it important to get this tech into MMOs?? Robotic Quintet Composes And Plays Its Own Music Sound Machines 2.0 is Festo's latest effort to create robotic musicians. The German engineering firm Festo has developed a self-playing robotic string quintet that will listen to a piece of music and generate new musical compositions in various musical styles effortlessly. Dubbed Sound Machines 2.0, the acoustic ensemble is made up of two violins, a viola, a cello, and a double bass, each consisting of a single string that is modulated by an electric actuator for pitch, a pneumatic cylinder that acts as a hammer to vibrate the string, and a 40 watt speaker.

Creators - Dedicated to inspiring designers, inventors & the creative spirit in all of us. August 22, 2013 Artist’s Work Paints a Beautiful Picture Animations Tyrus Wong, a 102-year-old artist’s work influenced the visual direction of Bambi in 1941. CLANG by Subutai Corporation Hi, Neal Stephenson here. My career as an author of science and historical fiction has turned me into a swordsmanship geek. As such, I'm dissatisfied with how swordfighting is portrayed in existing video games. These could be so much more fun than they are. Time for a revolution. In the last couple of years, affordable new gear has come on the market that makes it possible to move, and control a swordfighter's actions, in a much more intuitive way than pulling a plastic trigger or pounding a key on a keyboard.

How to Spot the Future Photo: Brock Davis Thirty years ago, when John Naisbitt was writing Megatrends, his prescient vision of America’s future, he used a simple yet powerful tool to spot new ideas that were bubbling in the zeitgeist: the newspaper. He didn’t just read it, though.