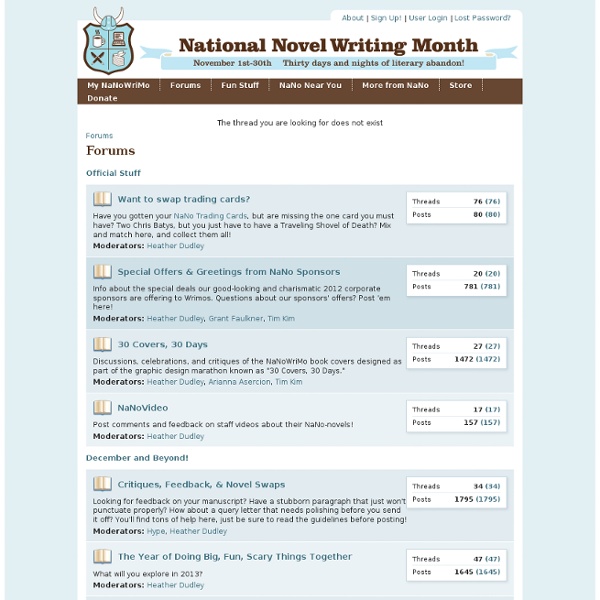 How to Plot and Write a Novel: Plan Your Novel Writing with the Snowflake Method Many novelists mull over story ideas, letting them ripen and develop over time. When the story is ready to be told, instead of just sitting down and starting to type, try the Snowflake Method. This step-by-step way to write a novel begins with essential elements and becomes more detailed with each step. Essential Elements for Novel Structure

25 Insights on Becoming a Better Writer When George Plimpton asked Ernest Hemingway what the best training for an aspiring writer would be in a 1954 interview, Hem replied, “Let’s say that he should go out and hang himself because he finds that writing well is impossibly difficult. Then he should be cut down without mercy and forced by his own self to write as well as he can for the rest of his life. At least he will have the story of the hanging to commence with.” Today, writing well is more important than ever. Questionnaires for Writing Character Profiles - Creative Writing Help Enter your e-mail to get the e-book for FREE. We'll also keep you informed about interesting website news. "I have searched the web and used different worksheets, but none have come close to your worksheets and descriptions of (what to do and what not to do). Both courses I have taken have with Creative Writing Now have been amazing. Each time I have learned something new. The one thing I love, you take everything apart and give examples." - Katlen Skye

The Ultimate Guide to Writing Better Than You Normally Do. Writing is a muscle. Smaller than a hamstring and slightly bigger than a bicep, and it needs to be exercised to get stronger. Think of your words as reps, your paragraphs as sets, your pages as daily workouts. Think of your laptop as a machine like the one at the gym where you open and close your inner thighs in front of everyone, exposing both your insecurities and your genitals. Creative Writing Prompts…Real Life to Characters For many writers (like me!) the beginning of a story is character. Something about a character intrigues me and I find myself wanting to follow them to see what makes them tick. Being a pantser (writing by the seat of my pants) as opposed to a plotter, I meet a character, write to figure out who they are, then keep writing until I discover a character’s story.

How to Create Good Personalities for Your Characters Edit Article Sample Character DescriptionsCreating Personalities for Your Own Characters Edited by Secretive, Julia Maureen, Flickety, Ben Rubenstein and 19 others You're on a plane to a distant country to visit some weird old relatives you are somehow related to. Creative Writing For Dummies Cheat Sheet Rewriting and editing helps to tighten up your work. But it can be difficult – what to chop and when to stop may not be clear, and you may change your mind more than once during the process. Ask yourself whether you need to take out: Unnecessary information and explanation. Passages of dialogue that go on too long.

Mary Sue In fan fiction, a Mary Sue is an idealized character, often but not necessarily an author insert.[1] Origin[edit] The term "Mary Sue" comes from the name of a character created by Paula Smith in 1973 for her parody story "A Trekkie's Tale"[2]:15 published in her fanzine Menagerie #2.[3] The story starred Lieutenant Mary Sue ("the youngest Lieutenant in the fleet — only fifteen and a half years old"), and satirized unrealistic Star Trek fan fiction.[4] Such characters were generally original female adolescents who had romantic liaisons with established canonical adult characters, or in some cases were the younger relatives or protégées of those characters. By 1976 Menagerie's editors stated that they disliked such characters, saying:

Related:  Writing • Writing • Character Profilers
Related:  chibi characters   -  Characters   -  Characters   -  Character Chart   -  The Different Types of Pasta: What Kind is on my Plate?   -  Nerd Paradise : How to Write a 20 Page Research Paper in Under a Day   -  Discover, Evaluate, and Shop with the Gadget Experts at Retrevo   -  How to Make a Web Site: The Complete Beginner's Guide   -  How to Create Good Personalities for Your Characters (with Sample Descriptions)   -  Fantasy Worldbuilding Questions   -  Fiction Factor - Seven Common Character Types   -  How to Draw a "Happy-Cute Chibi" [HTD Video #4] - YouTube   -  Your Writer's Workshop : Become a writer. Online writing workshop for writing books, creative writing and writing help.   -  Portal:Thinking - Wikipedia, the free encyclopedia   -  How to Create a Character | Holly Lisle: Official Author Homepage   -  Creating A Character Profile   -  Our Games Archive - Choice of Games LLC   -  FREE Guide to All Government Grants, Scholarships and Loans for Students (Fedmoney.org)   -  The Character Interview as a Writing Tool   -  Ash’s Guide to RPG Personality & Background :: The Guide   -  Fiction University   -  How to Make, Print, and Bind Your Own Books   -  How do you craft an exceptional life? - Positive Thoughts   -  Top 10 Pro Tips and Tools for Budding Web Developers and Designers   -  25 Things You Should Know About Word Choice « terribleminds: chuck wendig   -  15 Ways to Live, and Not Merely Exist   -  BrowserQuest   -  Writing Prompt: Get Into Character | Novel Novice   -  Chasing Delicious | Kitchen 101: Cooking Methods   -  Butterbeer III Recipe - Allrecipes.com   -  Focus Your Ambitions with the Lifehacker Hierarchy of Goals   -  Responsify.it - A responsive template generator   -  Chasing Delicious | Kitchen 101: Fruits, Vegetables & Herbs   -  Confessions of a Recovering Lifehacker   -  How To Stay Productive After Work   -  How to Develop a Character for a Story (with Character Descriptions)