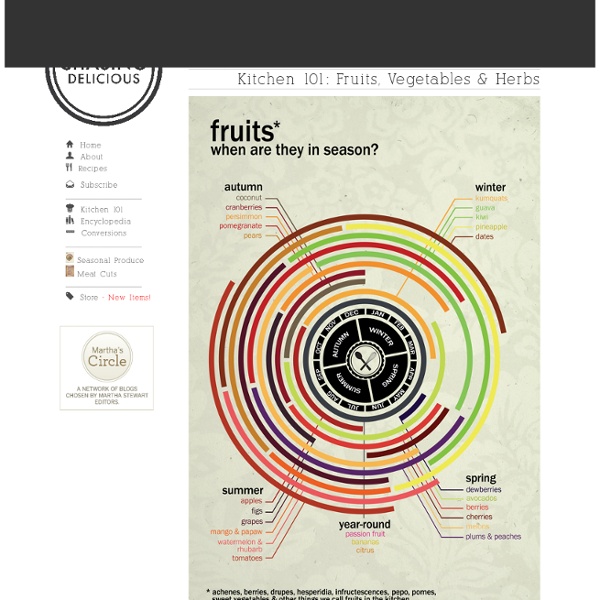 Kitchen 101: Fruits, Vegetables & Herbs I’d be remiss if I simply focused on imparting technical knowledge in the Kitchen 101 series here at Chasing Delicious. I’d be downright neglectful if I didn’t talk about ingredients, particularly the biggest misconception about produce today: that it is naturally available year-round. Though you may be able to find just about every type of fruit, vegetable, and herb in the grocery store every day of the year, a majority of this produce is not in season. If you are buying strawberries in December, you are likely purchasing a fruit that was picked six months ago and stored in a climate controlled facility ever since. Or you are buying a berry that has spent the last few weeks in a shipping container as it treks halfway across the globe from somewhere in the opposite hemisphere. Time spent in transit or storage is not the only inflated aspect of buying produce out of season. Second, become good friends with some local farmers too.

How to Make Proper Barbecue Chicken There's a lot of misconception when it comes to "barbecue." The problem is the word itself. It's used as a synonym for grilling, refers to the grill itself, or to the meat being grilled; it also has a sauce named after it; and sometimes it's just the word for the party itself held outdoors in somebody's backyard. What, actually, is "barbecue"? American purists see things a little differently. To them, "barbecue" is a wonderful Southern tradition of slow-cooking with indirect heat and woodsmoke to transform cuts of meat, often inexpensive ones, into succulent, unbelievably delicious results.

Pictogram illustrations Brief: Create artworks incorporating Ray-Ban Aviators, to be published on Ray-Ban's official Facebook page. These pictogram portraits were a part of Ray-Ban's 'Aviator Family' campaign (#AviatorFamily). Graphic Design2014 Client: Ray-BanBrief: Create artworks that somehow depict iconic people and famous characters that have been wearing Ray-Ban Aviators. Project Food Blog 2010: Picture Perfect First of all, thank you all for voting me through to Round 4 of Project Food Blog . The response to my “Around the World on a Plate” dinner post was absolutely overwhelming – I am glad so many people enjoyed a virtual trip around the world… Secondly, you didn’t think you I would take part in Project Food Blog and involve my boys’ cooking club, Les Petits Chefs , did you?

12 Substitutions for Baking Ingredients All set to bake and realize you're out of sugar or another essential ingredient? Here's a handy cheat sheet with 12 common baking subtitutions By Sue Gilbert M.S. Nutritionist - February 15, 2012 McDonalds Menu Items Around The World (Part 2, 32 pics) It’s an incredibly slow Food Network news day, so let’s pass the time until Sandra Lee does something stupid by gawking at McDonalds foods from around the world! Here’s a sampling of menu items that aren’t available in the United States: In Asia, you can pick up an icon sandwich, which is a chicken breast smothered with 2 different kinds of melted cheeses, bacon, and lettuce. This is the shaka-shaka chicken.

Pictogram rock posters This is my most ambitious, and maybe also the best, personal work I’ve done so far. I decided to pick a few bands and artists from the rock genre and make pictogram posters for them. Instead of just putting one single pictogram in each poster, like in my previous ‘Pictogram music posters’, I made as many as I could possibly come up with for each artist, and jammed them into one single poster. There is a total of 234 song pictograms in these posters. Gourmet Gaming, Request: The Legend of Zelda: The Wind Waker –... Request: The Legend of Zelda: The Wind Waker – Grandma’s Elixir Soup Believe it or not, I didn’t have many friends growing up. When I got to High School I was lucky enough to have one friend who also played games, who interestingly enough looked an awful lot like Link… He invited me over to his house with the intention of playing the Resident Evil GameCube remake, but instead we played the Legend of Zelda: The Wind Waker. All day. And wished we could consume this soup. Click ‘Read More’ for the full recipe!

10 techniques every cook should know Breading This easy, three-step technique ensures an even crumb coating. It's commonly used on thin cuts of chicken, pork or veal that will be fried or baked. To begin, set up your breading station. Fill the first of three shallow dishes with flour. Top 10 Secret Recipes Food The weekend is upon us, and what better way is there to enjoy it than to cook or bake some of your favorite takeout treats? Think of how much money you will save by whipping up these lovely recipes instead of paying out all the big bucks to the fast-food chains. So, here it is: the top 10 secret recipes!