Discover, Evaluate, and Shop with the Gadget Experts at Retrevo 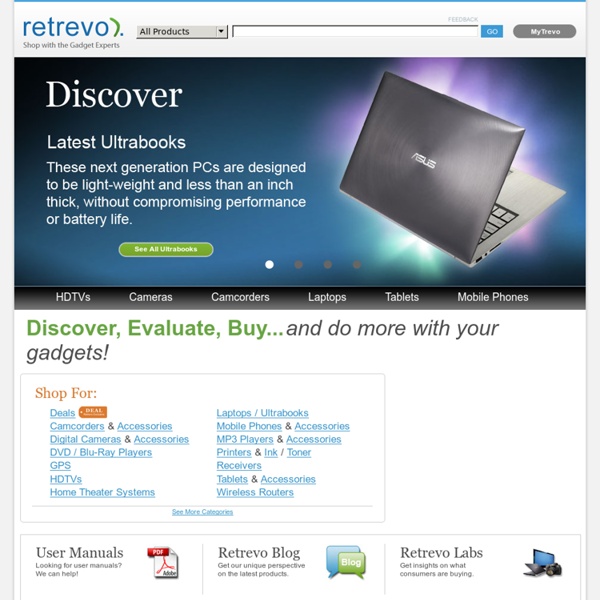 The Stupid Things You Do Online (and How to Fix Them) The omnipresent and largely unchallenged 'facebook uses personal information to deliver targeted adverts to you and therefore is evil' argument must be the dumbest thing that I'm subjected to on a regular basis, on practically every single consumer tech site. Do these sites have a '1 in every X posts has to slag off facebook for something' policy or something? Or is their schedule of facebook-privacy-FUDding merely tied to whenever facebook releases an update?

Lifehacker: The Guide to Working Smarter, Faster, and Better - Chapter 6, Streamline Common Jobs No doubt you perform dozens of repetitive actions every day, such as typing www.google.com into your browser's address bar, or clicking the Start button and navigating to the Programs menu, or typing "Let me know if you have any questions" at the end of an e-mail. These are opportunities for shortcuts that can add up to large savings over time. Every movement, every task, every action is a candidate for optimization and streamlining. Hack 50Command Your Windows PC from the Keyboard Level: Medium Platform: Windows

Top 10 Ways to Get the Most Out of Your Gear (Without Spending Extra Money) That answer comes down to opinion, needs, individual skills, budget and time constraints: * I still love a 2007 tablet. * I love a 2005 router (with DD-WRT) on it. * I love a 3+ yr old Core i5 desktop - it is still faster than a relatively new Core i5 laptop. * I'm still rocking a 5 yr old Motorola v125 cell phone - monthly cell costs are under $3/month. * My desktop keyboard is at least 15 yrs old.

Top 10 Warranty-Voiding Hacks @neverbeenback: As was said down below in the comments, many warranties state that you can't change the OS to something 'not approved' which is generally a few versions of windows. Wether or not the company *actually* voids your warranty is up to them. edit: hackintoshing is vaguely illegal as well, so I can't see Dell being psyched to help fix your hackmac @freedomweasel: You miss the point, you would be expected to return the laptop to windows before return as using the restore discs is always the first thing to do to remove the chance of software problems, if they easily diagnose a problem then they often tell you to remove your HDD before return , so again YOUR WARRANTY IS NOT EFFECTED.

Top 10 Pervasive Tech Myths That Are Only Wasting Your Time Better than just saying extended warranties are useless is putting a little thought behind them. Sure, 90% of the time, it's not worth it. If you get a dud gadget, you'll likely know within the return period or the regular warranty period. But, there are a few times I've bought them and been happy I did. For example, back when Xbox 360s were super error-prone, I went ahead and put down $29 for a 3-year extended warranty on my son's Xbox Elite. Yes, Microsoft had extended their own warranty to 3 years for specific red ring problems, but there were other problems that only the 1 year warranty covered.

How We Predict Each Other's Choices Humans may not be mind readers, but our brains are able to predict other people's decisions pretty well. New research on this phenomenon shows that two spots in the brain weigh the risk and reward of the choice someone else is making. "Perhaps we may one day better understand how and why humans have the ability to predict others' behavior, even those with different characteristics," Hiroyuki Nakahara, of the RIKEN Brain Science Institute, in Japan, said in a statement. "Ultimately, this knowledge could help improve political, educational and social systems in human societies." To study this, 39 participants watched another person play a game (on a computer screen) and predicted what choices that person would make based on the person's prior moves. Meanwhile, the researchers scanned the players' brains using functional magnetic resonance imaging (fMRI), a technique that can detect brain activity.

How to use Google for Hacking, how to hack security cameras, Hacking Personal and Confidential Documents ~ Dunya Infocom blog Google serves almost 80 percent of all search queries on the Internet, proving itself as the most popular search engine. However Google makes it possible to reach not only the publicly available information resources, but also gives access to some of the most confidential information that should never have been revealed. In this post I will show how to use Google for exploiting security vulnerabilities within websites. Popular Surveillance Cameras Open to Hackers, Researcher Says In a world where security cameras are nearly as ubiquitous as light fixtures, someone is always watching you. But the watcher might not always be who you think it is. Three of the most popular brands of closed-circuit surveillance cameras are sold with remote internet access enabled by default, and with weak password security — a classic recipe for security failure that could allow hackers to remotely tap into the video feeds, according to new research.