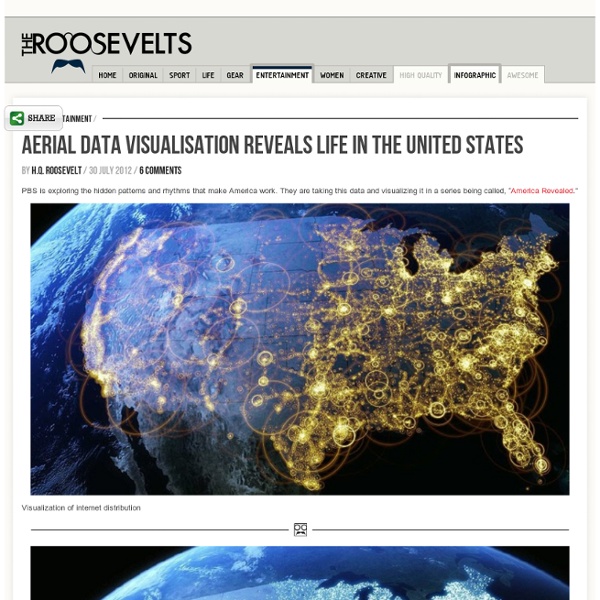 PBS is exploring the hidden patterns and rhythms that make America work. They are taking this data and visualizing it in a series being called, “America Revealed.” Visualization of internet distribution The pinpointed distribution of the unemployed Domino’s Pizza’s raw ingredients’ delivery routes in the Northeast U.S. electricity network routes The New York pizza delivery path of one Domino’s employee on a Friday night New York’s public transportation paths Patterns of planes’ flight paths Traced paths of deceased bodies being transported to their hometowns U.S. imports and exports of beef All the people in America’s towns and cities Single food outlet of a nationwide chain, such as fast food resturants, supermarkets or grocery stores, bakeries, gourmet shops and restaurants. From The Web Leave a comment comments Tags: infographic

Felix Baumgartner Skydives From The Edge Of Space [11 High Quality Photos] Red Bull is supposed to give you wings bit that would only slow Felix Baumgartner down. This week the daredevil made a test skydive from 18 miles up in preparation for his upcoming jump from 120,000 feet (22 miles) in which he hopes to reach speeds of 690 MPH and be the first person the break the sound barrier. In the latest test jump Felix went 0 to 509 MPH in just 30 seconds and all that is without the aid of a plane fo rocket, just pure gravity baby! Felix Baumgartner hugs Capcom 1 USAF Col (ret) Joe Kittinger after his 96,640 ft free fall from the stratosphere making them the only two people to freefall from that high an altitude. Felix Baumgartner gets lifted up to enter into the capsule. Pilot Felix Baumgartner of Austria sits in the capsule before lift off at the flight line. The weather and wind conditions aligned perfectly as the balloon lifts up during the second manned test flight for Red Bull Stratos. The capsule preparing for lift off as the 342 ft balloon fully inflates.

Lesson Plan for Making a Speaker Laboratory ©1995 The Regents of the University of California by Regan Lum Introduction: A speaker is a device that converts an electronic signal into sound. The speaker you will build (see figure 1) consists of a Styrofoam or paper cup, a coil of wire, a permanent magnet, and a signal source. The electronic signal goes through the coil and creates a varying electromagnet. figure 1 Purpose: In this laboratory, you will explore how a speaker works. Materials: 1 permanent magnet 2 feet of wire 1 pencil tape or glue 1 Styrofoam or paper cup 1 signal source (tape player) 1 plug with alligator clips for tape player Procedure: Assemble material as shown in figure 1. Leaving about 10 centimeters on the end, wrap the wire around a pencil to make a wire coil and tape or glue it to the bottom of the cup. Conclusion Does the volume control on the tape player work on your speaker? Return to CEA Science Education Home Page

Science Space Photo of the Day | Wired Science When the lamp is shattered, The light in the dust lies dead. When the cloud is scattered, The rainbow's glory is shed. These words, which open Shelley’s poem "When the Lamp is Shattered," employ visions of nature to symbolize life in decay and rebirth. It's as if he had somehow foreseen the creation of this new Gemini Legacy image, and penned a caption for it. Polar-ring galaxies are peculiar objects. Models of how polar-ring galaxies form offer two general formation scenarios: 1) a piercing merger between two galaxies aligned roughly at right angles, or 2) when the host galaxy tidally strips material from a passing gas-rich spiral and strews it into a ring. Born of Violence Brian Svoboda of the University of Arizona, who recently studied the chemical and temperature environment of NGC 660, believes that unique morphology arises from a previous interaction with a gas-rich galaxy. Weighing the Evidence Life from Death? Probing Dark Matter Image: Gemini Observatory/AURA [high-resolution]

10451_earth.jpg (JPEG Image, 2560×1600 pixels) LED Lights Make Augmented Vision a Reality | Elemental LEDucation LED Lights Make Augmented Vision a Reality Okay, this is just freaky. We know LED lights are versatile enough to be used for practically anything, but LED contact lenses? Once miniature green LEDs are developed (and they’re in the works, as of now), full color displays will be possible. Lead researcher Babak Parvis comments “You won’t necessarily have to shift your focus to see the image generated by the contact lens,” it would just appear in front of you and your view of the real world will be completely unobstructed when the display is turned off. Ah, the real world. Thanks to Extreme Tech for the quote and Trendhunter for the images. By the way, these freaky LED contact lenses may still be a product of the future, but a lot of cool LED products are of the present!

Western Philosophy Asteroid Mining Venture Backed by Google Execs, James Cameron Unveiled A newly unveiled company with some high-profile backers — including filmmaker James Cameron and Google co-founder Larry Page — has announced plans to mine near-Earth asteroids for resources such as precious metals and water. Planetary Resources, Inc. intends to sell these materials, generating a healthy profit for itself. But it also aims to advance humanity's exploration and exploitation of space, with resource extraction serving as an anchor industry that helps our species spread throughout the solar system. "If you look at space resources, the logical next step is to go to the near-Earth asteroids," Planetary Resources co-founder and co-chairman Eric Anderson told SPACE.com. "They're just so valuable, and so easy to reach energetically. Near-Earth asteroids really are the low-hanging fruit of the solar system." Planetary Resources is officially unveiling its asteroid-mining plans at 1:30 p.m. Precious metals and water "We're going to go to the source," Anderson said. The plan

How Do You Create A Culture Of Innovation? This is the third part in a series by Scott Anthony, author of The Little Black Book Of Innovation. It sounds so seductive: a “culture of innovation.” The three words immediately conjure up images of innovation savants like 3M, Pixar, Apple, and Google--the sorts of places where innovation isn’t an unnatural act, but part of the very fabric of a company. It seems a panacea to many companies that struggle with innovation. But what exactly is a culture of innovation, and how does a company build it? While culture is a complicated cocktail, four ingredients propel an organization forward: the right people, appropriate rewards and incentives, a common language, and leadership role-modeling. The Innovator’s DNA Has Four Components If you ask most people what makes a great innovator, the most common response is innate gifts from parents or a higher power. At the core is what the professors call “associational thinking.” Questioning: Asking probing questions that impose or remove constraints.

Higgs Found Finally, physics’s zoo of subatomic particles is full. Scientists have almost certainly snared the Higgs boson, the last particle waiting to be roped into the fold. Decades after it was proposed, the Higgs emerged in the shards of particle collisions at the world’s most powerful accelerator, the Large Hadron Collider at the CERN laboratory near Geneva. Physicists announced the discovery on July 4 during a seminar at the lab. “We have now found the last missing cornerstone of the standard model,” said Rolf-Dieter Heuer, CERN’s director-general. “It’s the beginning of a long journey to investigate all the properties of this interesting particle.” The particle’s mass is around 125 billion electron volts, or about 133 times the mass of a proton. A computer visualization depicts one array of particle debris that physicists would expect from the decay of the Higgs boson in the Large Hadron Collider, the world's largest particle accelerator.

Solar System Scope MIT Creates Amazing UI From Levitating Orbs Anyone else see The Avengers? Just like in Iron Man 1 and 2, Tony Stark has the coolest interactive 3-D displays. He can pull a digital wire frame out of a set of blueprints or wrap an exoskeleton around his arm. Those moments aren’t just sci-fi fun; they’re full of visionary ideas to explore and manipulate objects in 3-D space. Jinha Lee, from the Tangible Media Group of the MIT Media Lab, in collaboration with Rehmi Post and Hiroshi Ishii, has been playing with the idea of manipulating real floating objects in 3-D space to create a truly tactile user interface. It’s essentially a small field in which gravity doesn’t overcome an object. “There is something fundamental behind motivations to liberate physical matter from gravity and enable control. Interviewing Lee, I realized he’s one-part scientist, one-part philosopher. Whereas we are captivated by this empty pocket of air, Lee has hidden the real magic just above where there’s a 3-D actuator housing an electromagnet.

The Supermassive Star Betelgeuse --Will Its Violent Death Impact Earth? The red giant, once so large it would reach out to Jupiter's orbit if placed in our own solar system, has shrunk by 15 percent over the past decade in a half, although it's just as bright as it's ever been. "To see this change is very striking," said retired Berkeley physics professor Charles Townes, who won the 1964 Nobel Prize for inventing the laser. "We will be watching it carefully over the next few years to see if it will keep contracting or will go back up in size." Betelgeuse, whose name derives from Arabic, is easily visible in the constellation Orion. It gave Michael Keaton's character his name in the movie "Beetlejuice" and was the home system of Galactic President Zaphod Beeblebrox in "The Hitchhiker's Guide to the Galaxy." Red giant stars are thought to have short, complicated and violent lifespans. Betelgeuse, which is thought to be reaching the end of its lifespan, may be experiencing one of those collapses as it switches from one element to another as nuclear-fusion fuel.

Creators - Dedicated to inspiring designers, inventors & the creative spirit in all of us. August 22, 2013 Artist’s Work Paints a Beautiful Picture Animations Tyrus Wong, a 102-year-old artist’s work influenced the visual direction of Bambi in 1941. An exhibition at the Walt Disney Family Museum in San Francisco will be held to celebrate Wong’s work. According to the Disney Museum site, the drawings felt different from what is commonly known for Disney animation and this is what caught Walt Disney’s eye. Copyright Davison 2013 Sources: August 20, 2013 Hope “Floats” for those with Carpal Tunnel Product Innovation This levitating wireless computer mouse was invented by Vadim Kibardin of Kibardin Design, in order to help prevent and treat the contemporary disease, carpal tunnel syndrome. The levitating mouse consists of a mouse pad base and a floating mouse with a magnet ring. Source: August 15, 2013 Pin It