Phil Hansen: The art of the imperfect 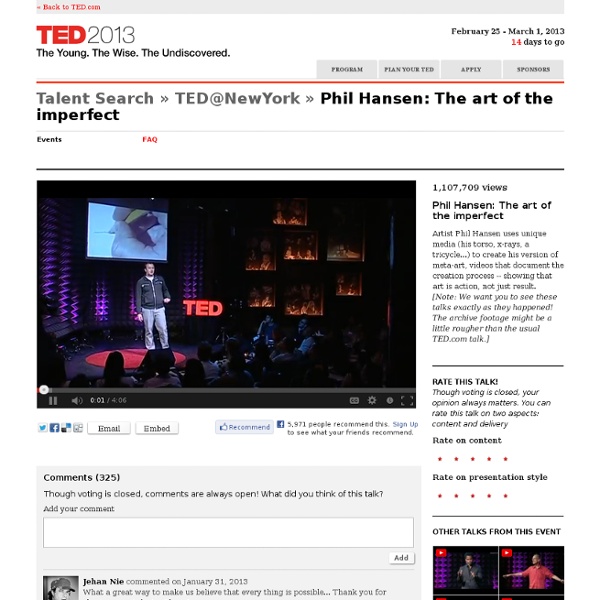 Judith Ann Braun's Fingers Are Magical With an art career spanning more than three decades, Judith Ann Braun has tested the limits of her artistic musculature. She began as a self-described “realistic figure painter,” and worked through the struggles common to anyone who endeavors upon an artistic pursuit, that of searching for one’s own voice in the chosen medium. Fast forward to the 21st century where the evolution of Braun’s work has brought us to the Fingerings series, a collection of charcoal dust landscapes and abstracts “painted” using not brushes but her fingertips.

The Unique Banana Spilt If you enjoy body art, you will probably like viewing this collection of hand paintings by Ray Massey. The image with pen and paper (within post) really tricked me! Photos © Ray Massey Link via Mighty Optical Illusions The Beauty Of Cinemagraph GIFs Developed in 2011 by Jamie Beck and Kevin Burg, cinemagraphs are GIF images that combine still photography and video to produce a stunning effect. Typically, the entire GIF is motionless except for one or two elements, providing a brilliant juxtaposition between the motion and the motionless. For your viewing pleasure, we’ve collected 43 beautiful cinemagraph GIFs:

OUYA: A New Kind of Video Game Console by OUYA & Kickstarter We just added game streaming through OnLive! Final Fantasy will be on OUYA...and we have an exclusive game! And VEVO has agreed to put their music videos on OUYA, XBMC adds a streaming media app, with TuneIn and iHeartRadio adding music! We're honored by all of you who are backing us -- THANK YOU. How to Listen to Music on the Internet for Free...Legally last updated July 26th, 2010 It's difficult to be a music fan in a world full of internet leaks, peer to peer and Bit Torrent. The allure to steal music is high and the incentives to pay for it are becoming lower everyday. So New Media Rights wanted to put together a list of great sites where you can download or stream free, legal mp3s and albums so you can avoid getting sued by the RIAA and support your favorite musicians at the same time.

Painting A recent exhibition in Minneapolis investigates the inherent desire to organize and structure our world, and the ensuing clutter and confusion when we become increasingly influenced by the sprawling technologies we’ve invented to helps us. Eddie Perrote, Leanna Perry and Bill Rebholz conceived Scategories as a display to highlight ordered chaos. ”We’ve enabled our minds to perceive more information, decrease our mental clutter and externalize our memories,” reads the press release, which explains why the exhibition feels a bit overrun, offering too much to process, even when the looking is enjoyable. Each of the artists has one foot firmly planted in the design world, which is perhaps the ideal middle ground to view the changing landscapes of art and design, and how technology is rapidly altering them. The group explains, “Through organizing the brain we present windows into the cerebral wold of structure, chaos, habitual patterns, and seemingly infinite layers of content.

Creative Street Art Art & Design A collection of funny, clever, and beautiful pieces of street art. Stumblers Who Like 50 of the World's Best Breakfasts – Written by Victoria Philpott Not quite had your fill of breakfasts just yet? Check out our beautifully visual list of the 30 best breakfasts from around the world. Plan your next culinary adventure or just get a little adventurous with breakfast at the weekend. Salivating. Danny Perez Directs The Music Video For Hot Chips &Look At Where We Are& We’ve been eagerly awaiting Hot Chip’s new album for the past two years (meanwhile listening to old songs “Over and Over” again), so when the British electro outlet released In Our Heads this June, we were psyched to hear their new take on dance music. The band teamed up with visual sorcerer and Creator Danny Perez who directed the music video for “Look At Where We Are,” produced by The Creators Project. Perez’s collaboration with Animal Collective produced the visual album ODDSAC back in 2010—an audiovisual assault on the senses where sound and imagery bombarded the viewer into another world. And Perez brought his unique aesthetic to bear on the video for “Look At Where We Are,” using a combination of abstract visuals and the age old story of a man and a woman.

Lizzy Stewart’s Charming Folk Art Inspired Illustrations Lizzy Stewart is a British illustrator who makes incredibly charming images. Inspired by Eastern European folk art and medieval painting, her drawings are wonderfully flat and full of simple shapes. Her work reminds me of some of her contemporaries like Pia Bramley and Carson Ellis, all of whom practically force a better mood on their viewer. Aside from her drawing and painting, Stewart makes graphic novel-style books as well.