How to Make, Print, and Bind Your Own Books 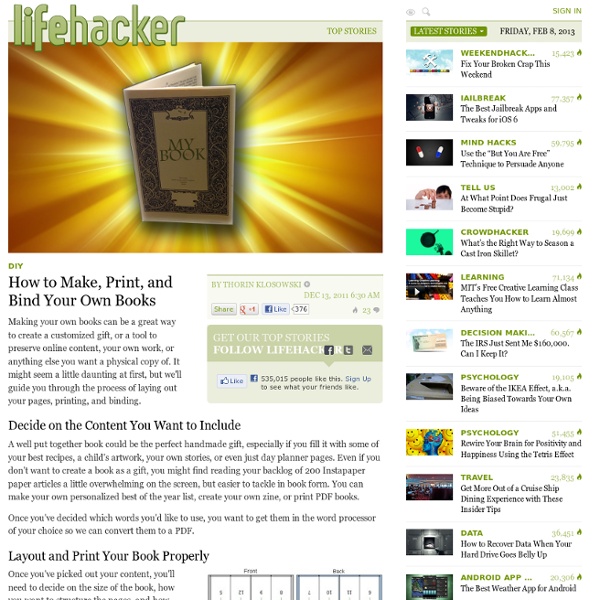 HTML for Babies Book Do-It-Yourself Book Press By Hamish MacDonald UPDATE:Hamish has started a DIY Book podcast! Back in 2000, I wrote an article for this website about how to produce your own book. Things have changed considerably since then, both in the technology available to individuals and in the services available in the marketplace. The original article was called “DIY Book Production.” Generally, self-publishing involves an inverse relationship of work to money: The more work you’re willing to do, the more money you can save; the more you want to just skip to an end product, the more it’ll cost you. Self-pub: Four times more options than in 2000. There may have been other ways to do it, but having written a book about Y2K, I didn’t have the time to find out. Offset printingPrint-on-DemandHand-bound hardcoversPerfect binding Here’s a summary of each (with special emphasis on the ones I like!) Offset printing. Cynthia pipes in: I second that recommendation wholeheartedly. What you need: Print-on-Demand. Hand-bound hardcovers.

The Ayn Rand Institute: A Brief Biography of Ayn Rand During her own lifetime, Rand became a famous and controversial figure. A best-selling author, she also carried her message to university classrooms, to Hollywood, to Congress, to the editorial page, to talk shows and radio programs. Her presence has only increased since her death in 1982, as her philosophy has become more well-known. Today, her books have sold in the millions, and she's the subject of an Oscar-nominated documentary, a U.S. postage stamp, university courses, and a philosophical society devoted to the study of her thought. Fueled by her vision of man as a heroic being and by the original philosophy behind it, more and more people, from all walks of life, from businessmen to students to professors to athletes to artists, are saying the same thing: "Ayn Rand's writings changed my life." — Ayn Rand, “To the Readers of The Fountainhead,” The Fountainhead

25 Things You Should Know About Word Choice 1. A Series Of Word Choices Here’s why this matters: because both writing and storytelling comprise, at the most basic level, a series of word choices. Words are the building blocks of what we do. They are the atoms of our elements. 2. Words are like LEGO bricks: the more we add, the more we define the reality of our playset. 3. You know that game — “Oh, you’re cold, colder, colder — oh! 4. Think of it like a different game, perhaps: you’re trying to say as much as possible with as few words as you can muster. 5. Finding the perfect word is as likely as finding a downy-soft unicorn with a pearlescent horn riding a skateboard made from the bones of your many enemies. 6. For every right word, you have an infinity of wrong ones. 7. You might use a word that either oversteps or fails to meet the idea you hope to present. 8. Remember how I said earlier that words are like LEGO, blah blah blah help define reality yadda yadda poop noise? 9. 10. 11. 12. 13. 14. Am. 15. No, really. 16. 17. 18.

Was Ayn Rand a Conservative? Was Ayn Rand a Conservative?by Neil Parille Introduction Some years ago I consulted a biographical dictionary for information on Ayn Rand. At the same time, the occasional references to Rand as a conservative call for explanation. Ayn Rand’s “Conservatism” The idea that Rand was a conservative probably results from a focus on her advocacy of capitalism in isolation from the rest of her thought. Another reason Rand might be considered a conservative is that some of her views on moral theory and individual moral issues also find echoes in conservative thought. It is also interesting to observe how Rand allies herself with the middle class in opposition to the intellectuals and the “counter culture.” There are other issues on which Rand sided with conservatives and the middle class. Rand also attacked progressive education and its chief theoretician, John Dewey, both frequent targets of conservatives. Anti-Egalitarianism Equality benefits no one. The State Persecuted? Conclusion

» The 7-Step Write a Book Fast Program Post written by Leo Babauta. I’m often asked about writing (something I’ve done professionally for 22 years), and one of the most common things people want help with is writing a book. I’ve written a number of books, including 110,000 words of a novel in a month (in addition to blogging regularly), and numerous non-fiction books. I could share a lot of tips for writing a book, but my favorite secret is how I can write a book in just three days. I’ve written several books this way, and really, it’s the same process I used to write 110,000 words in a month. And trust me, it works. Create a Time Limit. That’s it. Happy writing, my friends.

The Ultimate Guide to Writing Better Than You Normally Do. Writing is a muscle. Smaller than a hamstring and slightly bigger than a bicep, and it needs to be exercised to get stronger. Think of your words as reps, your paragraphs as sets, your pages as daily workouts. Procrastination is an alluring siren taunting you to google the country where Balki from Perfect Strangers was from, and to arrange sticky notes on your dog in the shape of hilarious dog shorts. The blank white page. Mark Twain once said, “Show, don’t tell.” Finding a really good muse these days isn’t easy, so plan on going through quite a few before landing on a winner. There are two things more difficult than writing. It’s so easy to hide in your little bubble, typing your little words with your little fingers on your little laptop from the comfort of your tiny chair in your miniature little house. It’s no secret that great writers are great readers, and that if you can’t read, your writing will often suffer. Available in print withThe Best of McSweeney’s Internet Tendency

i love english literature TEN SIMPLE KEYS TO PLOT STRUCTURE Structure is something that every agent and executive in Hollywood talks about, and that all of us teachers/authors/consultants/gurus/whatever go on and on about, to the point that it can seem complicated, intricate, mysterious and hard to master. So I want present plot structure in a way that simplifies it – that will at least give you a starting point for properly structuring your screenplay without overwhelming you with rules and details and jargon. Here are what I consider ten key elements of structure – ten ways of looking at structure that will immediately improve the emotional impact – and commercial potential – of your script. THE SINGLE RULE OF STRUCTURE I once got to work with long time television writer Doug Heyes, who used to say that there is only one rule for achieving proper plot structure: What’s happening now must be inherently more interesting than what just happened.

The Harry Potter Lexicon 20 obsolete English words that should make a comeback Photo: Katherine Hodgson If we all start using them, these words can be resurrected. DURING MY UNDERGRADUATE studies as a Linguistics major, one of the things that struck me most is the amazing fluidity of language. New words are created; older words go out of style. The following words have sadly disappeared from modern English, but it’s easy to see how they could be incorporated into everyday conversation. Words are from Erin McKean’s two-volume series: Weird and Wonderful Words and Totally Weird and Wonderful Words. 1. Verb trans. – “To confuse, jumble” – First of all this word is just fun to say in its various forms. 2. Verb intr. – “To take one’s pleasure, enjoy oneself, revel, luxuriate” – Often I feel the word “enjoy” just isn’t enough to describe an experience, and “revel” tends to conjure up images of people dancing and spinning around in circles – at least in my head. 3. 4. 5. 6. 7. 8. 9. 10. For 10 more interesting obsolete words, go to the next page.

Secret Belgian Binding Instructions The Secret Belgian Binding These instructions show you how to bind a book with an interesting pattern of weaving which laces the front and back covers to the spine. Included is the sewing of the text block (a set of four signatures) which is attached to the inside spine of the cover. The secret is in the weave of the cover and in attaching the text block. It is not difficult to do but requires patience in getting the threads taut so that the book does not wobble. Hedi Kyle rediscovered this binding attributed to the Belgians and she solved the mystery of how to make it. The materials and tools needed are as follows: Questions or comments? Media tycoons wanted: Make your own newspaper Newspaper Club has been voted one of the designs of the year So you want to be a newspaper baron? (Haven't you heard that print is dead?) If you insist - well, you could do work experience (for nothing) and hopefully get a part-time job at the paper. Then, after a few years, work your way to a staff position, if you're lucky. And spend decades navigating office politics to eventually become the chosen one to run the place. Then, with all your power and influence, you can shape the news agenda and be courted by some of the world's most powerful politicians - if newspapers still exist then. Or you could just go online, now, and print your own paper using the Newspaper Club. 'Surprisingly cheap' This new London-based start-up allows anyone to print their own 12-page newspaper. "It doesn't occur to people that they can print their own newspaper, and you find out you can, it's kinda cool," says Russell Davies, a former ad executive-turned-blogger who is one of those behind the venture. Fanzines