FREE Guide to All Government Grants, Scholarships and Loans for Students (Fedmoney.org) 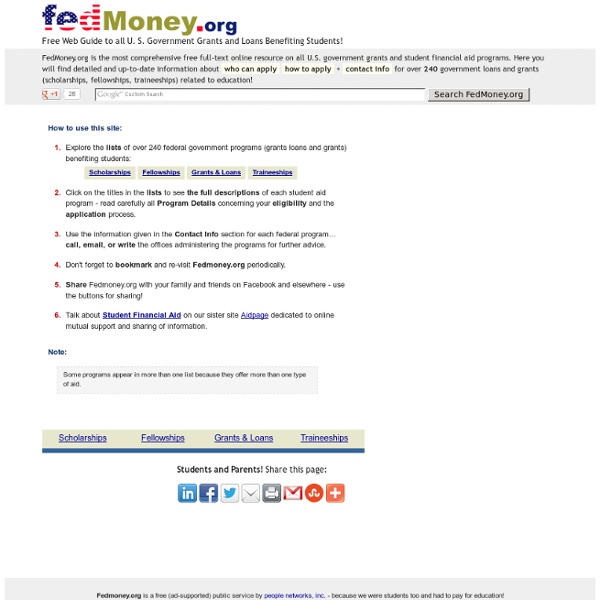 Slideshow: Money Graffiti To be perfectly upfront, what we’re about to show you is not something we endorse. The legality of writing on U.S. currency isn’t clear-cut: according to Title 18 of the United States Code, Section 333 (18 U.S.C. §333), “whoever mutilates, cuts, defaces, disfigures, or perforates, or unites or cements together, or does any other thing to any bank bill… with intent to render such bank bill, draft, note, or other evidence of debt unfit to be reissued, shall be fined under this title or imprisoned not more than six months, or both.” The key term here is “intent to render” that bill to be reissued, which implies that it has to be taken out of circulation, and the bills we have included in this slideshow may very well be still exchanging hands. (Section 331 of the code, by the way, addresses the “mutilation” of coins, and as you can see here, the folks at the U.S.

Positive Thinking: Avoid 5 Toxic Beliefs That Ruin Careers The Book of Proverbs in the Old Testament is, in my opinion, one of the best business books ever published. One passage, in particular, contains a world of business wisdom: "As a man believes so is he." (23:7) In the past, I've written in this blog about the beliefs that make people more successful. The Protean Echo Reduces All Of Your Credit Cards To One Ubercard Ready to enter a cardless future but not quite sure about NFC? The Protean Echo might be for you. This clever project essentially captures your credit cards onto one multi-purpose card that can hold up to three cards at a time. It works like this: you scan your magnetic stripe cards into a smartphone app using a supplied dongle. You can then “upload” three cards to the Protean Echo and select them by tapping one of three touch-sensitive spots.

How to Buy a New Car - Step 2 After submitting a you should receive email responses from all the dealerships within 24 hours. They will not be specific in terms of trim, options, or price…or the response will simply contain the salesman’s contact information. That’s ok! I’ve made it easy for you to respond to their emails. Zombie Virus Drives Caterpillars To An Explosive Death Halloween is just around the corner, but it seems like some members of the animal kingdom have already started playing ghoulish tricks on one another. Scientists recently discovered something that was causing European gypsy moth caterpillars to behave very strangely. The caterpillars were infected by a deadly baculovirus, and with their last bits of strength, they did something that would be out of the question if they were healthy: they climbed out onto the very highest leaves of their tree in the middle of the day. There, their diseased bodies split open, raining infected caterpillar guts onto the leaves and branches below. The death ritual is so bizarre, that scientists started using the term ”tree top disease” to describe the virus that caused it. The virus “ends up using just about all of the caterpillar to make more virus, and there are other genes in the virus that then make the caterpillar melt.

Email Marketing Blog for Small Business: How to Make the Best Use of An Email Signature So many times email signatures are an afterthought and not really looked at as an opportunity to sell. What I mean by “email signature” is the signature you put at the bottom of your person-to-person emails, not on your email marketing campaigns (although you can use signatures for that as well!) And I don’t only mean your own email signature, I mean the email signatures of all of your employees as well, especially if you’re sending out a lot of customer service related emails. First things first, you’ve got to make sure that there are standard pieces of information your employees include when they’re representing your business. Name, company name, address and phone number.Twitter and Facebook links and encourage people to follow you.Website and blog address.

Beware of These Tipping Traps That Make You Overpay I always tip well, even when I feel service was less than spectacular, because only because society expects it. I've been a server, so I don't begrudge tipping in that respect, but I do find it to be a nasty, brutish, and outdated convention, and one that is only getting worse. Back in my youth as a waiter, standard tipping was 10%, and you went to 15% for great service, 20% for exceptional... now I would never tip below 20% for basic service.

13 Business Books That Will Blow Your Mind Having never taken a business class in college I find that I read and listen to a lot of business books to round out my education. The books usually aren't "How to Manage Your Cash Flow" but rather get me to rethink the way I run my business, which--despite no business classes or diploma--continues to be in business 13 plus years after I started it. In that time, here are 13 of the books that had the biggest impact on how I run my business (in no particular order): Albert Einstein: Becoming a Freethinker Taken from: Albert Einstein's Autobiographical Notes Open Court Publishing Company, LaSalle and Chicago, Illinois, 1979. pp 3-5. When I was a fairly precocious young man I became thoroughly impressed with the futility of the hopes and strivings that chase most men restlessly through life. Moreover, I soon discovered the cruelty of that chase, which in those years was much more carefully covered up by hypocrisy and glittering words than is the case today. By the mere existence of his stomach everyone was condemned to participate in that chase.