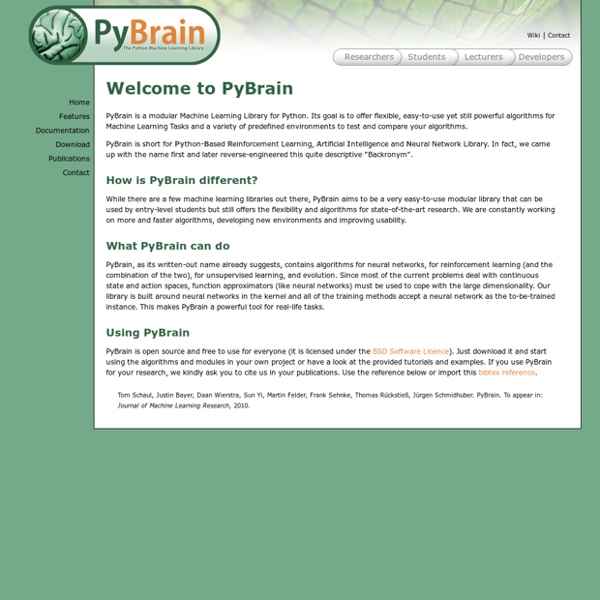 PyBrain is a modular Machine Learning Library for Python. Its goal is to offer flexible, easy-to-use yet still powerful algorithms for Machine Learning Tasks and a variety of predefined environments to test and compare your algorithms. PyBrain is short for Python-Based Reinforcement Learning, Artificial Intelligence and Neural Network Library. In fact, we came up with the name first and later reverse-engineered this quite descriptive "Backronym". How is PyBrain different? While there are a few machine learning libraries out there, PyBrain aims to be a very easy-to-use modular library that can be used by entry-level students but still offers the flexibility and algorithms for state-of-the-art research.

On Biological and Digital Intelligence DynaPsych Table of Contents A Reaction to Jeff Hawkins’ Book On Intelligence Ben Goertzel October 7, 2004 OK, for starters I’ll get the conventional-book-review-ish stuff out of the way. Jeff Hawkins’ new book On Intelligence is an excellent book, well worth reading whether you’re a total novice to the cognitive and neural sciences or an expert researcher in one or more related domains. machine learning in Python — scikit-learn 0.13.1 documentation "We use scikit-learn to support leading-edge basic research [...]" "I think it's the most well-designed ML package I've seen so far." "scikit-learn's ease-of-use, performance and overall variety of algorithms implemented has proved invaluable [...]." "For these tasks, we relied on the excellent scikit-learn package for Python." "The great benefit of scikit-learn is its fast learning curve [...]"

Neural Networks Abstract This report is an introduction to Artificial Neural Networks. The various types of neural networks are explained and demonstrated, applications of neural networks like ANNs in medicine are described, and a detailed historical background is provided. The connection between the artificial and the real thing is also investigated and explained. Finally, the mathematical models involved are presented and demonstrated. Contents:

An Introduction to Neural Networks Prof. Leslie Smith Centre for Cognitive and Computational Neuroscience Department of Computing and Mathematics University of Stirling. lss@cs.stir.ac.uk last major update: 25 October 1996: minor update 22 April 1998 and 12 Sept 2001: links updated (they were out of date) 12 Sept 2001; fix to math font (thanks Sietse Brouwer) 2 April 2003 This document is a roughly HTML-ised version of a talk given at the NSYN meeting in Edinburgh, Scotland, on 28 February 1996, then updated a few times in response to comments received. Please email me comments, but remember that this was originally just the slides from an introductory talk! Why would anyone want a `new' sort of computer?

Introduction to Natural Language Processing with Python In this talk, Jess Bowden introduces the area of NLP (Natural Language Processing) and a basic introduction of its principles. She uses Python and some of its fundamental NLP packages, such as NLTK, to illustrate examples and topics, demonstrating how to get started with processing and analysing Natural Languages. She also looks at what NLP can be used for, a broad overview of the sub-topics, and how to get yourself started with a demo project. This talk was part of AsyncJS (May event). [00:00:08] Today, I’m going to be talking about natural language processing, specifically with Python, just a bit of an introduction.

Machine Learning Machine learning is the science of getting computers to act without being explicitly programmed. In the past decade, machine learning has given us self-driving cars, practical speech recognition, effective web search, and a vastly improved understanding of the human genome. Machine learning is so pervasive today that you probably use it dozens of times a day without knowing it. A Non-Mathematical Introduction to Using Neural Networks The goal of this article is to help you understand what a neural network is, and how it is used. Most people, even non-programmers, have heard of neural networks. There are many science fiction overtones associated with them. And like many things, sci-fi writers have created a vast, but somewhat inaccurate, public idea of what a neural network is. Most laypeople think of neural networks as a sort of artificial brain. Neural networks would be used to power robots or carry on intelligent conversations with human beings.

spaCy Usage Documentation On this page, we'll be featuring demos, libraries and products from the spaCy community. Have you done something cool with spaCy? Let us know! 7 Steps to Mastering Machine Learning With Python Getting started. Two of the most de-motivational words in the English language. The first step is often the hardest to take, and when given too much choice in terms of direction it can often be debilitating. Where to begin? Data Mining Survivor: - dmsurvivor The procedures and applications presented in this book have been included for their instructional value. They have been tested but are the author offer any warranties or representations, nor do they accept any liabilities with respect to the programs and applications. The book, as you see it presently, is a work in progress, and different sections are progressed depending on feedback.

Connectivism Editor’s Note: This is a milestone article that deserves careful study. Connectivism should not be con fused with constructivism. George Siemens advances a theory of learning that is consistent with the needs of the twenty first century. His theory takes into account trends in learning, the use of technology and networks, and the diminishing half-life of knowledge. It combines relevant elements of many learning theories, social structures, and technology to create a powerful theoretical construct for learning in the digital age. George Siemens Teach yourself Machine Learning the hard way ! It has been 3 years since I have steered my interests towards Machine Learning. I had just graduated from college with a Bachelor of Engineering in Electronics and Communication Engineering. Which is, other way of saying that I was: a toddler in programming.little / no knowledge of algorithms.studied engineering math, but it was rusty.no knowledge of modern optimization.zero knowledge of statistical inference.