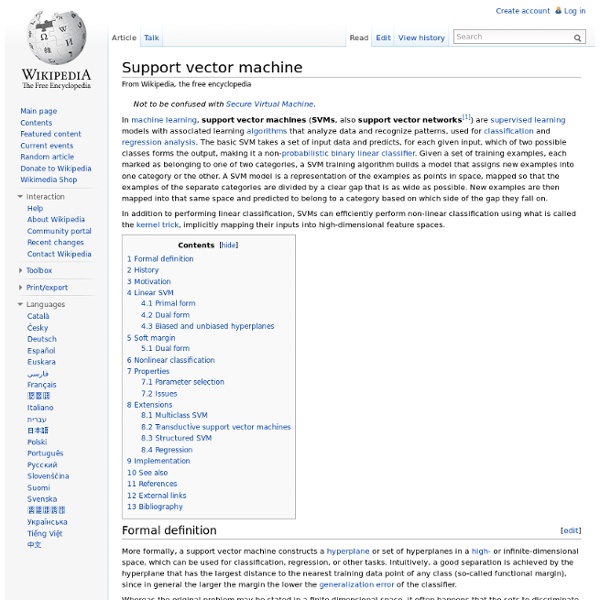 In machine learning, support vector machines (SVMs, also support vector networks[1]) are supervised learning models with associated learning algorithms that analyze data and recognize patterns, used for classification and regression analysis. Given a set of training examples, each marked as belonging to one of two categories, an SVM training algorithm builds a model that assigns new examples into one category or the other, making it a non-probabilistic binary linear classifier. An SVM model is a representation of the examples as points in space, mapped so that the examples of the separate categories are divided by a clear gap that is as wide as possible. New examples are then mapped into that same space and predicted to belong to a category based on which side of the gap they fall on. Definition[edit] Whereas the original problem may be stated in a finite dimensional space, it often happens that the sets to discriminate are not linearly separable in that space. Note that if . belongs. . Related:  Machine Learning

AdaBoost While every learning algorithm will tend to suit some problem types better than others, and will typically have many different parameters and configurations to be adjusted before achieving optimal performance on a dataset, AdaBoost (with decision trees as the weak learners) is often referred to as the best out-of-the-box classifier. When used with decision tree learning, information gathered at each stage of the AdaBoost algorithm about the relative 'hardness' of each training sample is fed into the tree growing algorithm such that later trees tend to focus on harder to classify examples. Overview[edit] Training[edit] AdaBoost refers to a particular method of training a boosted classifier. where each is a weak learner that takes an object as input and returns a real valued result indicating the class of the object. -layer classifier will be positive if the sample is believed to be in the positive class and negative otherwise. Each weak learner produces an output, hypothesis of the resulting .

Kernel Methods for Pattern Analysis - The Book Principal component analysis PCA of a multivariate Gaussian distribution centered at (1,3) with a standard deviation of 3 in roughly the (0.878, 0.478) direction and of 1 in the orthogonal direction. The vectors shown are the eigenvectors of the covariance matrix scaled by the square root of the corresponding eigenvalue, and shifted so their tails are at the mean. Principal component analysis (PCA) is a statistical procedure that uses orthogonal transformation to convert a set of observations of possibly correlated variables into a set of values of linearly uncorrelated variables called principal components. PCA is closely related to factor analysis. PCA is also related to canonical correlation analysis (CCA). Details[edit] Mathematically, the transformation is defined by a set of p-dimensional vectors of weights or loadings that map each row vector of X to a new vector of principal component scores , given by First component[edit] The first loading vector w(1) thus has to satisfy Further components[edit] Covariances[edit]

Connectionism Connectionism is a set of approaches in the fields of artificial intelligence, cognitive psychology, cognitive science, neuroscience, and philosophy of mind, that models mental or behavioral phenomena as the emergent processes of interconnected networks of simple units. There are many forms of connectionism, but the most common forms use neural network models. Basic principles[edit] The central connectionist principle is that mental phenomena can be described by interconnected networks of simple and often uniform units. The form of the connections and the units can vary from model to model. For example, units in the network could represent neurons and the connections could represent synapses. Spreading activation[edit] In most connectionist models, networks change over time. Neural networks[edit] Most of the variety among neural network models comes from: Biological realism[edit] Learning[edit] The weights in a neural network are adjusted according to some learning rule or algorithm.

Empirical risk minimization Empirical risk minimization (ERM) is a principle in statistical learning theory which defines a family of learning algorithms and is used to give theoretical bounds on the performance of learning algorithms. Background[edit] Consider the following situation, which is a general setting of many supervised learning problems. and and would like to learn a function (often called hypothesis) which outputs an object , given . where is an input and is the corresponding response that we wish to get from To put it more formally, we assume that there is a joint probability distribution over , and that the training set consists of instances drawn i.i.d. from . is not a deterministic function of , but rather a random variable with conditional distribution for a fixed We also assume that we are given a non-negative real-valued loss function which measures how different the prediction of a hypothesis is from the true outcome is then defined as the expectation of the loss function: , where is the indicator notation.

Decision tree Traditionally, decision trees have been created manually. A decision tree is a decision support tool that uses a tree-like graph or model of decisions and their possible consequences, including chance event outcomes, resource costs, and utility. It is one way to display an algorithm. Decision trees are commonly used in operations research, specifically in decision analysis, to help identify a strategy most likely to reach a goal. Overview[edit] A decision tree is a flowchart-like structure in which internal node represents test on an attribute, each branch represents outcome of test and each leaf node represents class label (decision taken after computing all attributes). In decision analysis a decision tree and the closely related influence diagram is used as a visual and analytical decision support tool, where the expected values (or expected utility) of competing alternatives are calculated. A decision tree consists of 3 types of nodes: Decision tree building blocks[edit] See also[edit]

Autoencoder An autoencoder, autoassociator or Diabolo network[1]:19 is an artificial neural network used for learning efficient codings.[2] The aim of an auto-encoder is to learn a compressed, distributed representation (encoding) for a set of data, typically for the purpose of dimensionality reduction. Overview[edit] Architecturally, the simplest form of the autoencoder is a feedforward, non-recurrent neural net that is very similar to the multilayer perceptron (MLP), with an input layer, an output layer and one or more hidden layers connecting them. The difference with the MLP is that in an autoencoder, the output layer has equally many nodes as the input layer, and instead of training it to predict some target value y given inputs x, an autoencoder is trained to reconstruct its own inputs x. I.e., the training algorithm can be summarized as For each input x, Do a feed-forward pass to compute activations at all hidden layers, then at the output layer to obtain an output x̂ Training[edit]