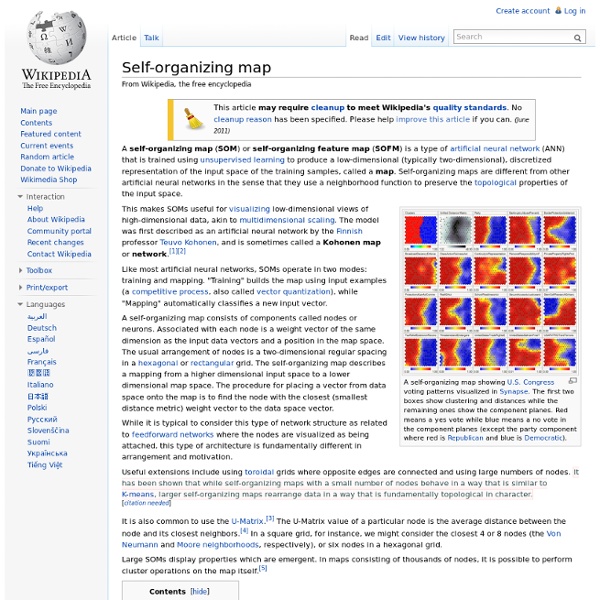 Multilayer perceptron A multilayer perceptron (MLP) is a feedforward artificial neural network model that maps sets of input data onto a set of appropriate outputs. A MLP consists of multiple layers of nodes in a directed graph, with each layer fully connected to the next one. Except for the input nodes, each node is a neuron (or processing element) with a nonlinear activation function. Theory[edit] Activation function[edit] If a multilayer perceptron has a linear activation function in all neurons, that is, a linear function that maps the weighted inputs to the output of each neuron, then it is easily proved with linear algebra that any number of layers can be reduced to the standard two-layer input-output model (see perceptron). The two main activation functions used in current applications are both sigmoids, and are described by in which the former function is a hyperbolic tangent which ranges from -1 to 1, and the latter, the logistic function, is similar in shape but ranges from 0 to 1. Layers[edit] in the

Recurrent neural network A recurrent neural network (RNN) is a class of neural network where connections between units form a directed cycle. This creates an internal state of the network which allows it to exhibit dynamic temporal behavior. Unlike feedforward neural networks, RNNs can use their internal memory to process arbitrary sequences of inputs. Architectures[edit] Fully recurrent network[edit] This is the basic architecture developed in the 1980s: a network of neuron-like units, each with a directed connection to every other unit. For supervised learning in discrete time settings, training sequences of real-valued input vectors become sequences of activations of the input nodes, one input vector at a time. Hopfield network[edit] The Hopfield network is of historic interest although it is not a general RNN, as it is not designed to process sequences of patterns. A variation on the Hopfield network is the bidirectional associative memory (BAM). Elman networks and Jordan networks[edit] The Elman SRN Where:

Artificial neural network An artificial neural network is an interconnected group of nodes, akin to the vast network of neurons in a brain. Here, each circular node represents an artificial neuron and an arrow represents a connection from the output of one neuron to the input of another. For example, a neural network for handwriting recognition is defined by a set of input neurons which may be activated by the pixels of an input image. After being weighted and transformed by a function (determined by the network's designer), the activations of these neurons are then passed on to other neurons. Like other machine learning methods - systems that learn from data - neural networks have been used to solve a wide variety of tasks that are hard to solve using ordinary rule-based programming, including computer vision and speech recognition. Background[edit] There is no single formal definition of what an artificial neural network is. History[edit] Farley and Wesley A. Recent improvements[edit] Models[edit] or both and , where

Autoencoder An autoencoder, autoassociator or Diabolo network[1]:19 is an artificial neural network used for learning efficient codings.[2] The aim of an auto-encoder is to learn a compressed, distributed representation (encoding) for a set of data, typically for the purpose of dimensionality reduction. Overview[edit] Architecturally, the simplest form of the autoencoder is a feedforward, non-recurrent neural net that is very similar to the multilayer perceptron (MLP), with an input layer, an output layer and one or more hidden layers connecting them. For each input x, Do a feed-forward pass to compute activations at all hidden layers, then at the output layer to obtain an output x̂ Measure the deviation of x̂ from the input x (typically using squared error, i) Backpropagate the error through the net and perform weight updates. (This algorithm trains one sample at a time, but batch learning is also possible.) Auto-encoders can also be used to learn overcomplete feature representations of data.