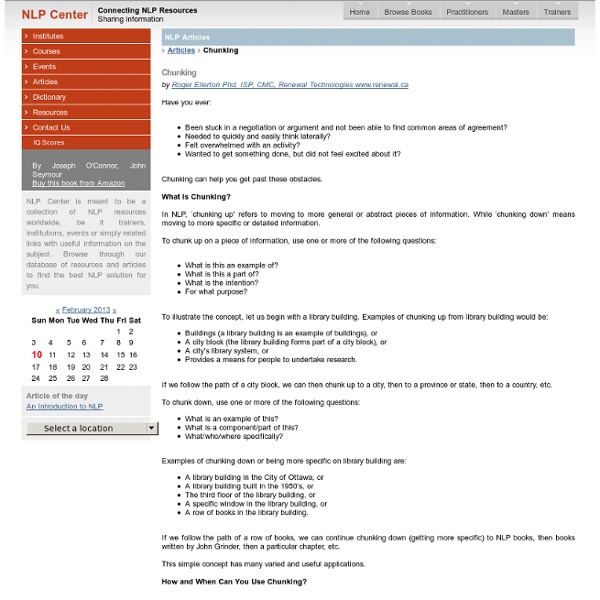 NLP Articles Articles The Importance of Doing what’s Important in Life by Jevon Dängeli What do you really want in life? What’s your purpose and your destiny in this life? Remember this: the universe supports people who are pursuing their passion and those who are pursuing their destiny. Written by Jevon Dängeli – NLP / HNLP Trainer & Wellness Coach IQ Scores NLP Center is meant to be a collection of NLP resources worldwide, be it trainers, institutions, events or simply related links with useful information on the subject.

"Mirror Neurons": The Neuropsychology of NLP Modelling NLP is a modelling technology, the purpose of which is to attend to, describe and transfer models of excellence. The process of NLP modelling has been described as the “core activity of NLP” by Bostic St. Clair and Grinder and as such is the most important activity in the development of the field of NLP. The finding of mirror neurons has been hailed as the single most important unpublicised story of the decade by world-renowned neuroscientist V.S. NLP and Mirror Neurons [back to top] The discipline of NLP has grown tremendously over the last twenty-five years with the popularisation of its applications through books, seminars and the occasional guru (for example, Anthony Robbins). In Neuro-Linguistic Programming we have a distinctive type of modelling called NLP modelling whose function is the creation of models of human excellence. The primary motor and premotor cortices exist to execute physical, bodily actions. Humans as Natural Modellers [back to top] References [back to top]