How will we build an artificial human brain? 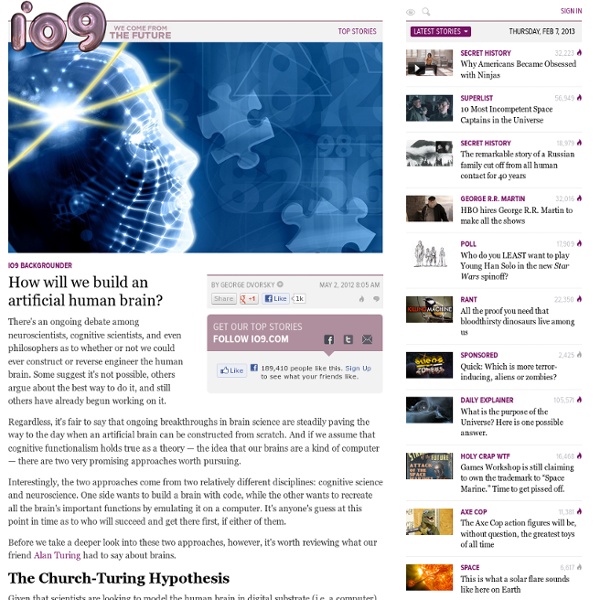 Paralyzed Rats Learn to Walk Again Paralyzed rats learned to walk again after a combination of electro-chemical stimulation to their injured spines and intensive rehabilitation therapy. Researchers say the treatment “woke up” dormant or sleeping neurons in their spinal cords, and formed new connections to the brain. Scientists hope the treatment might someday help paralyzed humans. Researchers at the University of Zurich in Switzerland, injected a mixture of chemicals to stimulate the rats' spinal nerve cells, which communicate with the brain. The rats were also placed in a robotic device that looks like a little vest, to support their weight. During the first few weeks after the treatment, lead researcher Grégoire Courtine at the Swiss Federal Institute of Technology of Lausanne says the rats did not move their legs. At the end of six to seven weeks, Courtine says, the rats were able to sprint up stairs, achieving what he calls 100 percent recuperation of voluntary movement.

Re-Evolving Mind, Hans Moravec, December 2000 Computers have permeated everyday life and are worming their way into our gadgets, dwellings, clothes, even bodies. But if pervasive computing soon automates most of our informational needs, it will leave untouched a vaster number of essential physical tasks. Construction, protection, repair, cleaning, transport and so forth will remain in human hands. Robot inventors in home, university and industrial laboratories have tinkered with the problem for most of the century. The first electronic computers in the 1950s did the work of thousands of clerks. But things are changing. The short answer is that, after decades at about one MIPS (million instructions (or calculations) per second), computer power available to research robots shot through 10, 100 and now 1,000 MIPS starting about 1990 (Figure 1). It was a common opinion in the AI labs that, with the right program, readily available computers could encompass any human skill. It's easy to explain the discrepancy in hindsight.

Mice have different neural subsystem associated with instinctually important smells A new study finds that mice have a distinct neural subsystem that links the nose to the brain and is associated with instinctually important smells such as those emitted by predators. That insight, published online this week in Proceedings of the National Academy of Sciences, prompts the question whether mice and other mammals have specially hardwired neural circuitry to trigger instinctive behavior in response to certain smells. In the series of experiments and observations described in the paper, the authors found that nerve cells in the nose that express members of the gene family of trace amine-associated receptors (TAAR) have several key biological differences from the much more common and diverse neurons that express members of the olfactory receptor gene family. Those other nerve cells detect a much broader range of smells, said corresponding author Gilad Barnea, the Robert and Nancy Carney Assistant Professor of Neuroscience at Brown University. Different circuits and genes

Goertzel Contra Dvorsky on Mind Uploading Futurist pundit George Dvorsky recently posted an article on io9, labeled as “DEBUNKERY” and aimed at the topic of mind uploading. According to the good Mr. Dvorsky, “You’ll Probably Never Upload Your Mind into a Computer.” He briefly lists eight reasons why, in his view, mind uploading will likely never happen. UPDATE - here is a video interview on this subject: Note that he’s not merely arguing that mind uploading may come too late for you and me to take advantage of it – he’s arguing that it probably will never happen at all! The topic of Dvorsky’s skeptical screed is dear to my heart and mind. Every one of Dvorsky's objections has been aired many times before – which is fine, as his post is a journalistic article, not an original scientific or philosophic work, so it doesn’t necessarily have to break new ground. In this article I will briefly run through Dvorsky’s eight objections, and give my own, in some cases idiosyncratic, take on each of them. But, whatever…. So what? True enough.

Brain imaging can predict how intelligent you are, study finds (Medical Xpress) -- When it comes to intelligence, what factors distinguish the brains of exceptionally smart humans from those of average humans? As science has long suspected, overall brain size matters somewhat, accounting for about 6.7 percent of individual variation in intelligence. More recent research has pinpointed the brain’s prefrontal cortex, a region just behind the forehead, as a critical hub for high-level mental processing, with activity levels there predicting another 5 percent of variation in individual intelligence. Now, new research from Washington University in St. Published in the Journal of Neuroscience, the findings establish “global brain connectivity” as a new approach for understanding human intelligence. “Our research shows that connectivity with a particular part of the prefrontal cortex can predict how intelligent someone is,” suggests lead author Michael W. This document is subject to copyright.

How Self-Replicating Spacecraft Could Take Over the Galaxy I'm going to re-post here a previous comment I made on this subject, because I think it's worth repeating. Any alien civilization that is sufficiently developed enough to span the cosmos, will be so far advanced from us, that we would not be able to even comprehend their technology and in turn they probably wouldn't even recognise us as a sentient intelligent species. I've always found the "Well if there are aliens why haven't they said hello?" argument to be far too arrogant. There are islands all over the oceans of our world that are nothing more than rocks sticking out of the water with bacteria on them. That's us, the barren rock. The alien probes have probably been through out solar system many times (we'd never know) looked at our skyscrapers, cities and agriculture.

Simple mathematical computations underlie brain circuits (Medical Xpress) -- The brain has billions of neurons, arranged in complex circuits that allow us to perceive the world, control our movements and make decisions. Deciphering those circuits is critical to understanding how the brain works and what goes wrong in neurological disorders. MIT neuroscientists have now taken a major step toward that goal. In a new paper appearing in the Aug. 9 issue of Nature, they report that two major classes of brain cells repress neural activity in specific mathematical ways: One type subtracts from overall activation, while the other divides it. "These are very simple but profound computations," says Mriganka Sur, the Paul E. Newton Professor of Neuroscience and senior author of the Nature paper. The findings could help scientists learn more about diseases thought to be caused by imbalances in brain inhibition and excitation, including autism, schizophrenia and bipolar disorder. A fine balance Taking a circuit apart This document is subject to copyright.

How to build a Dyson sphere in five (relatively) easy steps If you have energy, you can launch as much mass as you want into space. If you have enough mass, you have a radiation shield, and with the energy from your swarm, you can spin that mass for gravity. These are not issues. Well we could live on Earth and just keep the dyson swarm inside the orbit of Mercury. Of course our planet would be in perpetual darkness then but that's an exercise left to the student. Problems I see with launching mass to block radiation is that mass would block ALL radiation including visible light. Where does that mass come from? Even if you do build structures large enough to support humans for extended periods of time, and you spin them to create centrifugal force (not gravity), that doesn't solve the radiation issue. Not everything is based on energy production, as you wrote above. Also, as other commenters have pointed out, if we direct the energy from these swarms to Earth, something has to be done with it.