William Kamkwamba: How I harnessed the wind 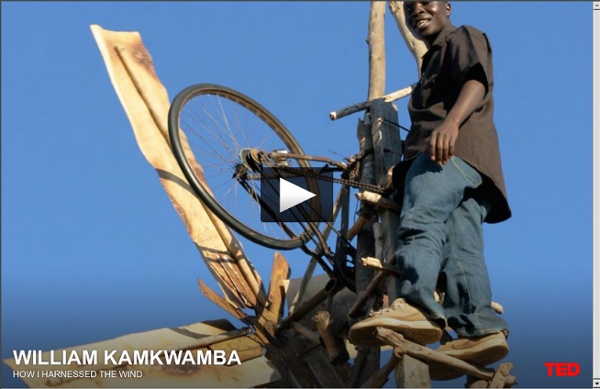 Related:  Innovation for the Classroom • innovations

You only need 3 things to be creative According to Teresa Amabile, you ‘only’ need three ingredients to be creative: source: Teresa Amabile 'How to Kill Creativity' KnowledgeToolsMotivation Great, you say, I know quite a few things, I have some tools in my shed and I am motivated to bits. Bring it on! Not so fast!

William Kamkwamba The first windmill William Kamkwamba (born August 5, 1987) is a Malawian inventor and author. He gained fame in his country when, in 2002, he built a windmill to power a few electrical appliances in his family's house in Masitala using blue gum trees , bicycle parts, and materials collected in a local scrapyard. Will Potter: The secret US prisons you've never heard of before Father Daniel Berrigan once said that "writing about prisonersis a little like writing about the dead."I think what he meant is that we treat prisoners as ghosts.They're unseen and unheard.It's easy to simply ignore themand it's even easier when the government goes to great lengths to keep them hidden. As a journalist, I think these storiesof what people in power do when no one is watching,are precisely the stories that we need to tell.That's why I began investigatingthe most secretive and experimental prison units in the United States,for so-called "second-tier" terrorists.The government calls these units Communications Management Units or CMUs.Prisoners and guards call them "Little Guantanamo."

Creativity—It’s our future Share this Episode Please select a language: Autoplay End of Video The women of India's Barefoot College bring light to remote villages Securing the end of her bright yellow and orange sari firmly around her head, Santosh Devi climbs up to the rooftop of her house to clean her solar panels. The shining, mirrored panels, which she installed herself last year, are a striking sight against the simple one-storey homes of her village. No less remarkable is that this 19-year-old, semi-literate woman from the backwaters of Rajasthan has broken through India's rigid caste system to become the country's first Dalit solar engineer.

School Day Of The Future How Do We Prepare Our Children for What’s Next? When most of us were deciding what to major in at college, the word Google was not a verb. It wasn’t anywhere close to being conceived at all. Neither was Wikipedia or the iPhone or YouTube. We made decisions about our future employment based on what we knew existed at the time. Kenyan Women Light Up Villages with Solar Power Let there be light. And thanks to the efforts of rural women in one of the most remote corners of the Kenyan republic, lights turn on as night falls at the end of a sunny day. Tucked away in the remote villages of Olando and Got Kaliech in rural Kenya, residents in this poor outpost in south-western Kenya today have light after darkness falls. The light is thanks to Phoebe Jondiko, Joyce Matunga and Phoebe Akinyi, the three solar “women engineers” who have literally switched on the lights in the two villages with a view to lighting up more villages in the remote Gwassi Division in Suba District. Blessed with year-round sunshine, Kenya is quickly waking up to the realization that it can successfully tap into one of the vast natural resources on the planet – the sun.

Windmills: William Kamkwamba’s Electric Wind William Kamkwamba (Credit) In 2002, fourteen year old William Kamkwamba was a normal schoolboy living in anything but normal times in a country ruled by poverty, starvation and death. While his country held a strong belief in magic, William became an inventor excited by the unknown wonders of science. His country of Malawi, in Africa, was in the midst of a devastating and deadly drought that threatened the very lives of his family and fellow villagers. He was forced by his father’s lack of funds to quit school and do whatever he could to help his family survive.