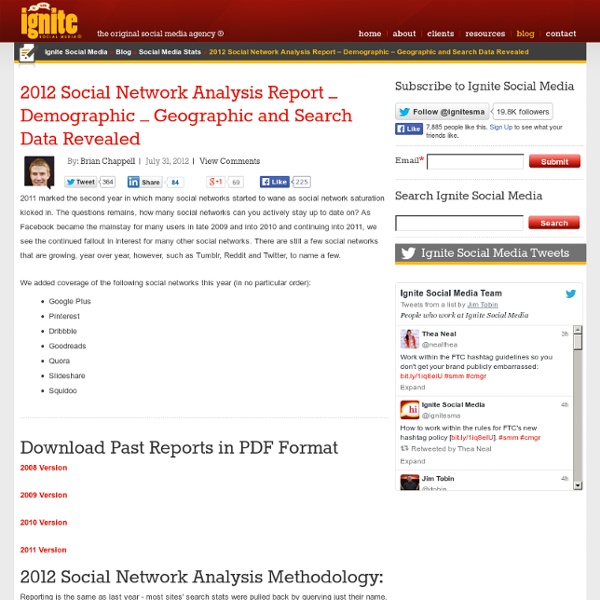 2011 marked the second year in which many social networks started to wane as social network saturation kicked in. The questions remains, how many social networks can you actively stay up to date on? As Facebook became the mainstay for many users in late 2009 and into 2010 and continuing into 2011, we see the continued fallout in interest for many other social networks. There are still a few social networks that are growing, year over year, however, such as Tumblr, Reddit and Twitter, to name a few. We added coverage of the following social networks this year (in no particular order): Google PlusPinterestDribbbleGoodreadsQuoraSlideshareSquidoo 2012 Social Network Analysis Methodology: Reporting is the same as last year - most sites' search stats were pulled back by querying just their name. All data continues to come from Google because they have one of the largest data sets on the web. The Search Traffic reports are based on proportionate search traffic for the given query. Badoo.com

Follow my leader: Retailers race to catch digital rivals 30 August 2012Last updated at 19:00 ET Viewpoint by Karmesh Vaswani Infosys Shoppers are increasingly letting the barrier between digital and bricks and mortar blur when it comes to retailers Walk down any High Street and you can see the biggest forces revolutionising shopping habits as the meteoric rise of Google, Amazon, Apple and Facebook (or the Gang of Four as they are known) have fast become a normal part of our day-to-day lives. We shop on phones, compare on Google and ask our Twitter friends what they think. These and other innovative companies have changed our expectations about shopping and are forcing regular High Street retailers to up their game in response. The future offers shoppers the best of both worlds, with smart retailers adopting the digital innovations from these companies to create an even more compelling experience for customers.

Twitter to Earn More Mobile Ad Revenue Than Facebook This Year [REPORT] Twitter may have a ways to go until it matches Facebook's valuation, but at least in one crucial segment — mobile advertising — it appears to be besting its larger rival. A report from eMarketer estimates that Twitter will hit $129.7 million in U.S. mobile ad revenues this year compared to $72 million for Facebook. However, Twitter's advantage in the mobile ad space won't last for long. According to eMarketer's predictions, Facebook's ad revenue will grow five-fold to $387 million in 2013, beating Twitter's take by more than $100 million. This would make Facebook the second highest mobile ad earner behind Google. 2012 Social Network Analysis Report – Demographic – Geographic and Search Data Revealed 2011 marked the second year in which many social networks started to wane as social network saturation kicked in. The questions remains, how many social networks can you actively stay up to date on? As Facebook became the mainstay for many users in late 2009 and into 2010 and continuing into 2011, we see the continued fallout in interest for many other social networks. There are still a few social networks that are growing, year over year, however, such as Tumblr, Reddit and Twitter, to name a few. We added coverage of the following social networks this year (in no particular order):

What Is The Kryptonite Of The Millennial Generation? No generation is just a single dimension or can be defined by a single thing. However, there are certain trends with every generation, and our newest to tackle the business world is no different. I am in constant awe and amazement at the levels of intelligence and poise possessed of so many millennials entering the workforce today. Having attended conferences where I have listened to them present, seen them in action at companies across the country, or worked alongside of them on projects, there is a level of sophistication that did not present itself for years with my generation. (Although, to be fair, that was because we all sat around in coffee houses, draped in way too much flannel, debating Nirvana lyrics, and deciding whether Ticketmaster was evil or just greedy.)

A New List of Free Social Bookmarking Icons Almost every site has this column of social bookmarking icons of the most famous and most visited social networking sites. Social networking sites have become one of the easiest ways to communicate and connect with your users as well as to promote your content. Whether if it is linking a new blog post, getting information, promoting a product or even dealing with support issues, social networking sites are where the companies go before any kind of media today. The social bookmarking icons have become an integral part in driving traffic into a website or blog. Integrating social media icons into your page is the very basic survival strategy to become very successful in the online community. Here is Another Compilation of Creative and Eye-Catching Social Bookmarking Icons that you can use to draw more attention from your visitors.

The Hunt for Social Business Value inShare102 Guest post by Ashley Furness of Software Advice When Microsoft announced plans to buy enterprise social network Yammer recently I was a little stunned. The reported $1.2-billion acquisition price tag seemed like a lot for simply replicating social networking functions in the business environment. 6 Tips for designing and running Social Media Contests Posted bydimitriszotoson to Marketing, Social Media Social Media Contests are great tools with many benefits that enable brands, products or services to gain visibility in social media channels, increase audience & the interaction with them, reinforce brand awareness and finally get genuine inspiration from real or prospect customers.

Are You Ready for the #SocialEra? A few months ago, Facebook bought Instagram for $1 billion. Instagram had 13 employees at that point in time. How is it possible for 13 people to create a company worth $1 billion? On the face of it, this might seem impossible. But if you read 11 Rules for Creating Value in the #SocialEra by Nilofer Merchant, it starts to make a bit more sense.