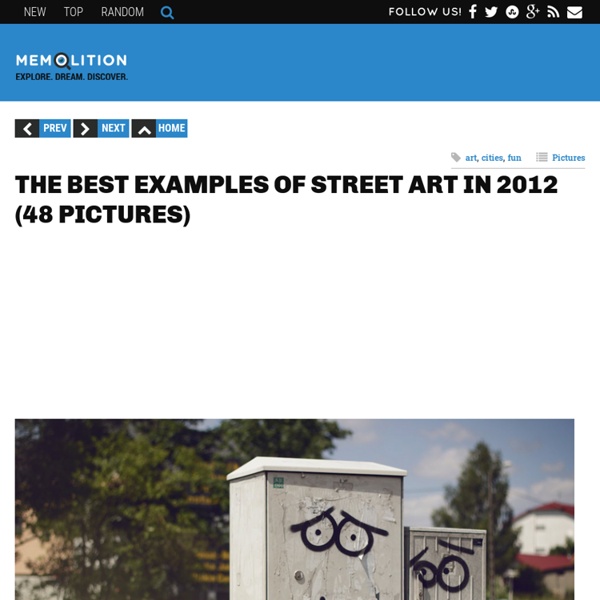 American Heroes and Innovators: New Paintings and Drawings by Chris and Justin Hopkins American Heroes and Innovators will mark the gallery’s second annual educational exhibition honoring Black History Month in Philadelphia. In 2013, Gravers Lane proudly hosted the members and staff of The Stained Glass Project: Windows that Open Doors, an after school program for inner-city youth that focuses on leadership, teamwork, and artistic creation and expression. This year, Gravers Lane Gallery is thrilled to exhibit portrayals of numerous African American men and women whose actions and ideas have made an immeasurable impact on American society as we know it. Through the works of father and son artists, Chris and Justin Hopkins, American Heroes and Innovators will portray a multi-generational affirmation of positive role models in the African American community. Exhibited portraits will range from Tuskegee Airmen and women to legendary musical artists.

106 of the most beloved Street Art Photos More info. More info. More Banksy on Street Art Utopia. More info. Base Jump Photoshoot with a Fashion Model, Brave Photographer for This One This is probably one of the coolest videos you’ll see all week: ridiculously attractive people jumping from ridiculously dangerous heights. Italian BASE jumper and fashion model Roberta Mancino teamed up with photographer Noah Bahnson and a host of other sexy suits to leap off Monte Brento: The project was commissioned in part by world-renowned fashion designer Roberto Cavalli, and released in February, just in time for Valentine’s Day. Bahnson shot the photos and footage with cameras strapped to his helmet:

DONDI Donald Joseph White, "DONDI" (April 7, 1961 — October 2, 1998) is considered one of the most influential graffiti artists in the history of the movement. Biography[edit] Early life[edit] Graffiti[edit] The Futuristic World of Ian McQue Talented artist Ian McQue lives in Edinburgh and works at Rockstar North Ltd. He took participation in such projects as GTA, The Lost&Damned, The Ballad of Gay Tony, Liberty City Stories, Vice City Stories, GTA: Chinatown Wars etc. He has been working in this industry more than 17 years. And today we invite you to take a look at the dark and beautiful future shown on hand painted pictures by this digital illustrator. Hunterian Art Gallery Collections: GLAHA 52297 This information is © The Hunterian Museum and Art Gallery, University of Glasgow 2016 CRE FERGUSSON, John Duncan; (Scottish; 1874-1961) Materials: oil on board

Rammellzee Rammellzee (stylized RAMM:ΣLL:ZΣΣ, pronounced "Ram: Ell: Zee"; late 1960 – June 27, 2010) was a visual artist, graffiti writer, performance artist, hip hop musician, art theoretician, and sculptor from New York City.[1][2] Life and work[edit] Rammellzee's graffiti and art work are based on his theory of Gothic Futurism, which describes the battle between letters and their symbolic warfare against any standardizations enforced by the rules of the alphabet. His treatise, Ionic treatise Gothic Futurism assassin knowledges of the remanipulated square point's one to 720° to 1440°, details an anarchic plan by which to revise the role and deployment of language in society.[3] He has stated that his name is derived from RAM plus M for Magnitude, Sigma (Σ) the first summation operator, first L - longitude, second L - latitude, Z - z-bar, Σ, Σ - summation. [4] In 1988, he and his band Gettovetts recorded the album Missionaries Moving.

DOMINO FACTORY light valve light valve audiovisual Tougher than the Rest: Joan Mitchell's Tree Paintings and Black Drawings There are currently two exhibitions of Joan Mitchell’s paintings and drawings on the same Chelsea street. Taken together, they offer an extended examination of a painter’s process as her sensibilities shift from a dominant mode expression to something altogether different. Cheim & Read, at 547 West 25th, has mounted a show of eleven paintings and pastels based on trees, while across the street at 514, Lennon, Weinberg is displaying twice that number, mostly small to midsize charcoal drawings alongside a few oil paintings. The two shows overlap in terms of time period (the sixties for both, the seventies and nineties for Cheim & Read); they also each feature an oil painting from 1964 that’s a close sibling of the other. At Cheim & Read, the canvas is “First Cypress,” measuring 88 1/2 x 78 inches; at Lennon, Weinberg, it is smaller (63 3/4 x 51 1/8 inches) and untitled.

The world's biggest gallery: How street art became big business - Features, Art Then the internet came along and changed all that. In a little over a decade, a genre that was once dismissed as vandalism has used cyberspace to gain credibility as one of the most vibrant and creative scenes in urban culture. Inspired by Banksy, who has completed the journey from viral sensation to millionaire creator of $60,000 canvasses, Oscar-nominated movies, and bestselling books, a generation of artists is now starting to fashion lucrative careers out of their former hobby. "Today, somebody does a tag in Russia, China, Japan, or Africa, a friend photographs it and within a few hours it'll be viewed on websites all over the world," says Jeffrey Deitch, director of the Museum of Contemporary Art in Los Angeles, which recently opened a major show on the subject.