What makes us happy? 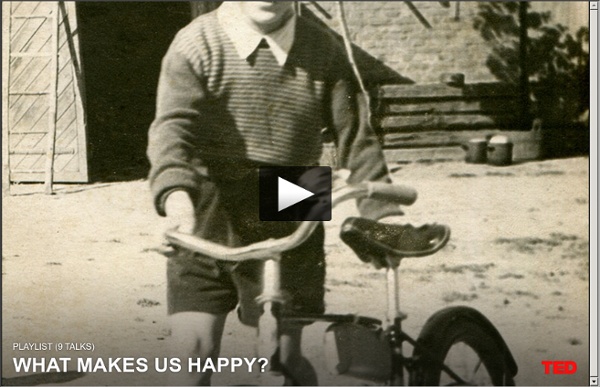 Using the new Positive Psychology Teaching Well-Being in SchoolsThe following is an excerpt from Flourish: A Visionary New Understanding of Happiness and Well-Being First, a quiz: Question one: in one or two words, what do you most want for your children? Neurosynaptic chips Because these neurosynaptic chips are small and low-power with corelets enabling sensory perception, a whole new range of applications can be built. Below are some conceptual designs that the team has envisioned: An autonomous robot in the shape of a sphere with multi-modal sensing, including image and sound, could be deployed in a disaster area for search and rescue missions. An internal mechanism would allow it to roll around an environment to survey areas and identify persons in need, the condition of the zone and possible hazards. It could also communicate with people it finds and guide them to safety through speakers and a video display.

THE SCIENCE OF HAPPINESS (DANIEL GILBERT:) When people think of "science," they naturally think of atoms, planets, robots — things they can touch and see. They know that subjective experiences such as happiness are important, but they believe that such experiences can't be studied scientifically. That belief is dead wrong. What does it take to study something scientifically? Our RISD — Earlier in the month, outgoing President John... Earlier in the month, outgoing President John Maeda presented Post-digital: the past, present and future of design and technology, an insightful (and at times humorous) talk aimed at RISD students. In front of the packed auditorium in the Chace Center, the former MIT professor gave an overview of his early artistic experiments and some personal thoughts on the how creativity, art and design will help improve our ever-changing world. Before the start of the presentation, Student Alliance President Rosa Glenn 14 TX and Graduate Student Alliance President Diana Wagner MID 14 gave Maeda a warm welcome. “As you’ll hear in his lecture [President Maeda] is enthusiastic, relentlessly inquisitive and is a model for how to ask questions that cannot be answered,” noted Glenn. Wagner echoed her heartfelt sentiments: “To the rest of the world, President Maeda is known as an author, a graphic designer, a computer scientist, an artist and an academic.

Smile and the world smiles back. Can looking at faces lower aggression? Before I started my PhD, I worked as a "research assistant". That's a fancy title for an academic dogsbody; well, it can be. I was lucky and had some great bosses in the five years I had that job, but sometimes it can involve menial tasks like data entry, or running experiments you think are a complete waste of time. One such experiment, that I was asked to run by my boss while we waited for ethics approval on another study, was published last week in the journal Psychological Science. Shows what I know! Three New Things Virgin Media Business is collaborating with Contagious’ consultancy arm, Insider, to launch a competition to track down and support Three New Things: cutting edge UK digital innovations that have the potential to change the way we live and work for the better. Contagious and Virgin Media Business are searching for UK companies, ideas and innovations that could change the way we live or do business. If you think your brand or idea has what it takes to impress, please fill in the entry form here by the 17th of February.

Study Shows Seeing Smiles Can Lower Aggression A happy face can certainly lift spirits, but can it reduce rage? Studies have documented that the physical act of smiling is a universal, and effective way to lift mood, if briefly. But in the latest research on the power of the smile, researchers led by Marcus Munafo of the University of Bristol in England found that even seeing smiles on the faces of others can have a profound effect on a person’s tendency toward violence or aggression— that is, as long as that person recognizes the smile as one of happiness, and not as a sneer. Munafo and his colleagues conducted a series of experiments involving normal adults as well as highly aggressive teens who had been referred to a youth program, either by educational authorities or the courts. About 70% of the teens already had a criminal record. (MORE: How to Lift Your Mood?

Cover Story: Daft Punk Daft Punk started working on Random Access Memories in 2008, playing almost everything on their own and making loops, just like they had done before. But it didn't feel right. “It became clear that we were limited by our own disability to hold a groove the way we wanted for more than eight or 16 bars,” admits Bangalter. “Something we love about disco is the idea of playing the same groove over and over again—your brain can tell it's not a sample that's being replayed.” So they enlisted technically masterful instrumentalists (the kind of guys who grace the covers of magazines like Modern Drummer and Bass Musician), put different combinations of players together, explained their ideas, laid down sheet music or hummed melodies, and collected tons of original recordings on analog tape.

The health benefits of happiness In the Scottish Borders they are trying out a new and quite unusual kind of medicine - happiness. Now it is claimed that happiness could be more important than smoking in determining your health. Dr Derek Cox, Director of Public Health at Dumfries and Galloway NHS, suspects that for decades health professionals have been missing a big trick in improving the health of the nation. "We've spent years saying that giving up smoking could be the single most important thing that we could do for the health of the nation. "And yet there is mounting evidence that happiness might be at least as powerful a predictor, if not a more powerful predictor than some of the other lifestyle factors that we talk about in terms of cigarette smoking, diet, physical activity and those kind of things."

TED talk on choices and happiness. how having more choices , or extra time to make up our mind about things, doesnt actually lead us to happiness. it actually makes us less content. study showed that people who were given the option to go back and change their mind on things were less content than people who had to make a decision and stick to it. when we are stuck with a situation, our mind works to confirm we made the best decision. by mkeen Feb 17