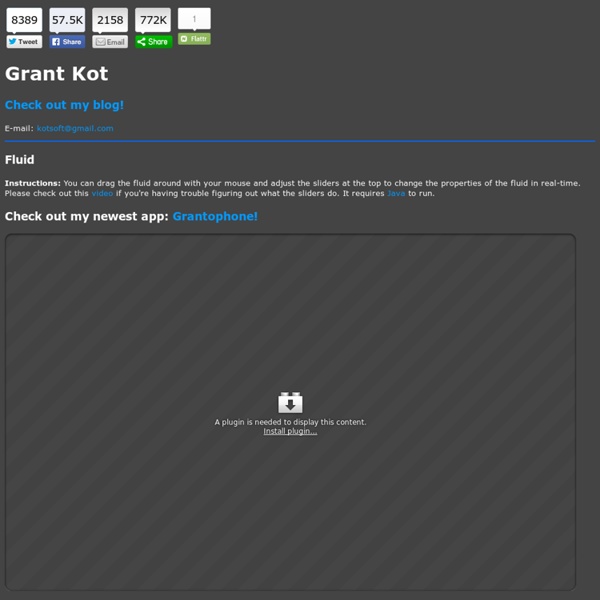 Check out my blog! E-mail: kotsoft@gmail.com Fluid Instructions: You can drag the fluid around with your mouse and adjust the sliders at the top to change the properties of the fluid in real-time. Please check out this video if you're having trouble figuring out what the sliders do. It requires Java to run. Check out my newest app: Grantophone! More cool demos! Please enable JavaScript to view the <a href=" powered by Disqus. About This is my implementation of the Material Point Method. For interpolation, I use the quadratic B-spline presented here: Analysis and Reduction of Quadrature Errors in the Material Point Method. Instead of integrating the density over time (which is what most of the MPM papers do), I do a density summation every frame. Material Parameters Some of these parameters are hard to explain in one or two sentences (and a couple I made up) so I'll also link you to their corresponding Wikipedia pages. Density - Target density for the particles. ©2011 Grant Kot

How To Steal Like An Artist by Austin Kleon Wednesday, March 30th, 2011 Buy the book: Amazon | B&N | More… Here’s what a few folks have said about it: “Brilliant and real and true.”—Rosanne Cash“Filled with well-formed advice that applies to nearly any kind of work.” Dunning–Kruger effect - Wikipedia, the free encyclopedia-Mozilla Firefox Cognitive bias about one's own skill The Dunning–Kruger effect is a hypothetical cognitive bias stating that people with low ability at a task overestimate their own ability, and that people with high ability at a task underestimate their own ability. As described by social psychologists David Dunning and Justin Kruger, the bias results from an internal illusion in people of low ability and from an external misperception in people of high ability; that is, "the miscalibration of the incompetent stems from an error about the self, whereas the miscalibration of the highly competent stems from an error about others".[1] It is related to the cognitive bias of illusory superiority and comes from people's inability to recognize their lack of ability.

Reactive Paint Shi Yuan has created a way to turn normally passive things into something with a life of its own. Like this wallpaper that reacts to heat, the painting that react when you touch it, or the daily calendar that fades away during the day. It is made using heat sensitive paint - and it is incredible. Heat Sensitive Wallpaper Turn up the heat and your wallpaper starts to blossom. Here with the radiator is off...

Caricature Map of Europe 1914-Mozilla Firefox The Clanker Powers: Germany is a massive military machine with weapons aimed outwards to all surrounding countries. It points threateningly at Britain, not so much as a sign of direct aggression, but more as an indicator that it was now Germany’s turn to start a grand global Empire to challenge the world’s current one. Austria Hungary is an aggressive armoured giant, teetering on shoddy foundations. It is also the primary aggressor in a land grab against Serbia, with two bayonets piercing the border. 10 Computer Shortcuts You Can Use for Evil EmailEmail In honor of April Fool’s Day, here are 10 computer shortcuts you can use for evil pranking a friend. Why would you need to use these? Let’s say your friend or co-worker steps away from his desk for just a few minutes (to get more coffee or go to the bathroom) and foolishly leaves his computer unlocked. These shortcuts will allow you to use that small window of time to pull a (somewhat) harmless computer prank that’s not only hilarious, but teaches him the value of locking his computer when he steps away. NOTE: Humor’s Office is not responsible for any damage (physical or mental) these shortcuts may cause.

Amazing Tilt-Shift Van Gogh Paintings [16 Pics] Jan 10, 2011 Serena Malyon, an illustrator in her third year at the Alberta College of Art & Design, has taken the classics works of Vincent Van Gogh and added a contemporary twist. Using Photoshop, Serena has added the ’tilt-shift’ effect to Van Gogh’s paintings, providing a fresh perspective on these masterpieces. Maybe some HDR photographs of Ansel Adams work is next?

Your Brain in Love: Scientific American-Mozilla Firefox Men and women can now thank a dozen brain regions for their romantic fervor. Researchers have revealed the fonts of desire by comparing functional MRI studies of people who indicated they were experiencing passionate love, maternal love or unconditional love. Together, the regions release neuro­transmitters and other chemicals in the brain and blood that prompt greater euphoric sensations such as attraction and pleasure. Conversely, psychiatrists might someday help individuals who become dan­gerously depressed after a heartbreak by adjusting those chemicals. Passion also heightens several cognitive functions, as the brain regions and chemicals surge.

25 Clever Ideas to Make Life Easier Here are clever ideas to make life easier. To see the complete list of 25 go here. You can pin the pics directly to Pinterest by hovering your mouse over the pic then clicking the “pin it”! Via: amy-newnostalgia.blogspot.com Why didn’t I think of that?! We guarantee you’ll be uttering those words more than once at these ingenious little tips, tricks and ideas that solve everyday problems … some you never knew you had!