4 Ways To Amplify Your Creativity 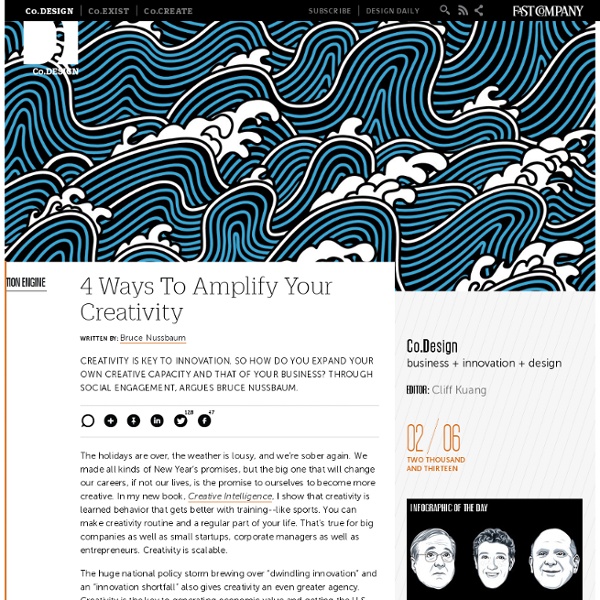 The holidays are over, the weather is lousy, and we’re sober again. We made all kinds of New Year’s promises, but the big one that will change our careers, if not our lives, is the promise to ourselves to become more creative. In my new book, Creative Intelligence, I show that creativity is learned behavior that gets better with training--like sports. You can make creativity routine and a regular part of your life. That’s true for big companies as well as small startups, corporate managers as well as entrepreneurs. Creativity is scalable. The huge national policy storm brewing over “dwindling innovation” and an “innovation shortfall” also gives creativity an even greater agency. So here are four specific ways to lead a more creative life and boost your creative capacities. 1. Nearly every creative entrepreneur, artist, musician, engineer, sports players, designer, and scientist works with one, two, or a handful of trusted people, often in a small space. 2. 3. Creativity is relational.

'How Creativity Works': It's All In Your Imagination iStockphoto.com What makes people creative? What gives some of us the ability to create work that captivates the eyes, minds and hearts of others? Jonah Lehrer, a writer specializing in neuroscience, addresses that question in his new book, Imagine: How Creativity Works. Lehrer defines creativity broadly, considering everything from the invention of masking tape to breakthroughs in mathematics; from memorable ad campaigns to Shakespearean tragedies. He finds that the conditions that favor creativity — our brains, our times, our buildings, our cities — are equally broad.

How To Steal Like An Artist by Austin Kleon Wednesday, March 30th, 2011 Buy the book: Amazon | B&N | More… Here’s what a few folks have said about it: “Brilliant and real and true.”—Rosanne Cash“Filled with well-formed advice that applies to nearly any kind of work.”—Lifehacker.com“Immersing yourself in Steal Like An Artist is as fine an investment in the life of your mind as you can hope to make.” What Is Disruptive Innovation? The theory of disruptive innovation, introduced in these pages in 1995, has proved to be a powerful way of thinking about innovation-driven growth. Many leaders of small, entrepreneurial companies praise it as their guiding star; so do many executives at large, well-established organizations, including Intel, Southern New Hampshire University, and Salesforce.com. Unfortunately, disruption theory is in danger of becoming a victim of its own success. Despite broad dissemination, the theory’s core concepts have been widely misunderstood and its basic tenets frequently misapplied. Furthermore, essential refinements in the theory over the past 20 years appear to have been overshadowed by the popularity of the initial formulation.

Researchers discover how and where imagination occurs in human brains Philosophers and scientists have long puzzled over where human imagination comes from. In other words, what makes humans able to create art, invent tools, think scientifically and perform other incredibly diverse behaviors? The answer, Dartmouth researchers conclude in a new study, lies in a widespread neural network—the brain's "mental workspace"—that consciously manipulates images, symbols, ideas and theories and gives humans the laser-like mental focus needed to solve complex problems and come up with new ideas.

Innovation is overvalued. Maintenance often matters more Innovation is a dominant ideology of our era, embraced in America by Silicon Valley, Wall Street, and the Washington DC political elite. As the pursuit of innovation has inspired technologists and capitalists, it has also provoked critics who suspect that the peddlers of innovation radically overvalue innovation. What happens after innovation, they argue, is more important. Maintenance and repair, the building of infrastructures, the mundane labour that goes into sustaining functioning and efficient infrastructures, simply has more impact on people’s daily lives than the vast majority of technological innovations. The fates of nations on opposing sides of the Iron Curtain illustrate good reasons that led to the rise of innovation as a buzzword and organising concept. Over the course of the 20th century, open societies that celebrated diversity, novelty, and progress performed better than closed societies that defended uniformity and order.

Motion Graphic: 29 Ways to Stay Creative Creativity is a fascinating concept, one I’ve wrestled with in my teaching and one I’ve debated with my students. Can creativity be taught? Are some people just naturally more creative than others? Hares, Tortoises, and the Trouble with Genius “Geniuses are dangerous.”— James March How many organizations would deny that they want more creativity, more genius, and more divergent thinking among their constituents? The great genius leaders of the world are fawned over breathlessly and a great amount of lip service is given to innovation; given the choice between “mediocrity” and “innovation,” we all choose innovation hands-down. So why do we act the opposite way? Stanford’s James March might have some insight. His book On Leadership (see our earlier notes here) is a collection of insights derived mostly from the study of great literature, from Don Quixote to Saint Joan to War & Peace.

Creativity Comes from Risk and Effort, Not Going to College As a college professor by trade (if I dare call my profession as such), I’m frequently asked a very compelling question: can creativity be taught? I’ve mulled this one over and over (and over some more) because it seems that in the answer to that question comes a very powerful opportunity: if creativity can, indeed, be taught, and if there is, truly, a formula for teaching it, then within the educator that possesses the formula lies the ability to change the world. A bit dramatic? Perhaps. But if we educators could master the art of teaching creativity, couldn’t we, in all reality, have the potential to spawn the world’s greatest innovations and insights in the minds of our students? Couldn’t we help people develop incredibly innovative ideas that, surely, exist in every human’s brain?

re:Work - The Roofshot Manifesto Google’s “moonshot factory” is inspiring and ambitious, but there’s a less talked-about route to many of Google’s great achievements -- the consistent, short-term, incremental “roofshots” that make our products better year after year. Don’t get me wrong. I want flying drones that can bring me fresh produce. I’m excited about contact lenses that measure blood sugar. It’s Okay to Fail: How We Can Learn to Be Better Creative Thinkers Our culture has a problem. We’re scared to fail. The reality is, much of what we do in life requires problem solving. And solving problems requires a certain level of opportunity for failure. The Top Idea in Your Mind July 2010 I realized recently that what one thinks about in the shower in the morning is more important than I'd thought. I knew it was a good time to have ideas. Now I'd go further: now I'd say it's hard to do a really good job on anything you don't think about in the shower.

Fear is boring, and other tips for living a creative life Creativity is a tricky word. Consultants peddle it, brands promise it, we all strive for it, often without really knowing quite what “it” really is. Put simply, there’s a lot of snake oil around creativity. But now here’s author Elizabeth Gilbert (TED Talk, Your elusive creative genius) to cut through the guff with her distinctly refreshing take on the topic. For her, we’re all creative souls already, we just need to figure out how to harness inspiration and unleash the creative spirit within. Most of the time, innovators don’t move fast and break things Innovation has become a defining ideology of our time. Be disruptive, move fast, break things! And everyone knows – right? – what innovation looks like.